In 1949, an English gentleman by the name of Anthony E. Pratt developed a board game which he dubbed Cluedo.  It was sold to a company called Waddington’s in Britain as well as Parker Brothers in the U.S  The classic murder mystery board game became popular, and I doubt there is a child since its subsequent launch who hasn’t played it at least once.

The classic board game has gone through some changes as it was fine-tuned over the years.  Initially there were ten characters in the game, but that was reduced to six.  (Eliminated in the shuffle were Mr. Brown, Mr. Gold, Miss Grey and Mrs. Silver).

The game, although not evident as a potential for film (but then what game really is…?), became fodder for Hollywood in the 80’s.  Getting some pretty good talent on the screen side of the production helped transform the kid’s game into a fairly cohesive if somewhat ridiculous movie.

It’s 1954.  Six guests arrive at a mansion in the rain, having been invited by a mysterious host.  They are each greeted at the door by Wadsworth (Tim Curry). 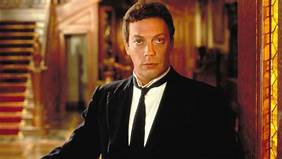 Along with Yvette (Colleen Camp), Wadsworth has prepared a night of subterfuge for the guests. 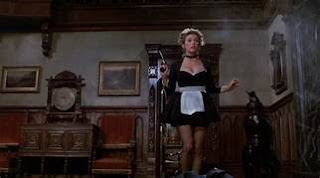 Wadsworth reveals that each guest has been given a secret identity for the night’s festivities.  Col. Mustard (Martin Mull), 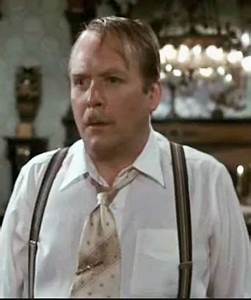 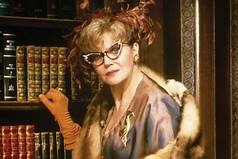 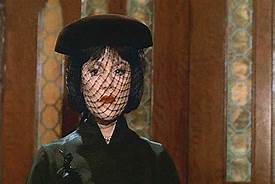 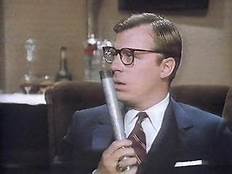 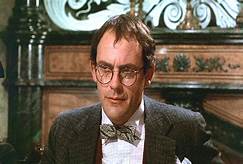 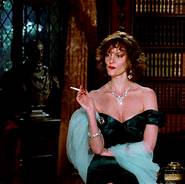 are all identified only by their aliases throughout the night.

Wadsworth reveals over the dinner that they have all been subjected to blackmail by their mysterious host.  The host, Mr. Boddy (Lee Ving), has been delayed but eventually shows up. 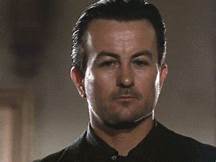 Mr. Boddy tells them all that Wadsworth is the biggest threat to their security and presents a package containing a gift for each.  Inside each package, the guest finds a potential murder weapon:  a candlestick, a knife, a revolver, a wrench, a lead pipe, and a rope

Suggesting that the real threat to their security is Wadsworth, Mr. Boddy suggests that one of the six kill him, and turns out the light.

But when the light comes back on it is Mr. Boddy who is lying on the floor.

Thus ensues one of the most convoluted and red herring infused plots ever conceived.  The guests pair up, along with Wadsworth and Yvette, trying to discover if there is another person on the premises.  Added to the confusion are the arrival of several unannounced visitors, such as a policeman and a singing telegram girl, each of which is murdered.  As the bodies pile up, it becomes increasingly evident that (at least) one of the guests is actually killing the rest of the people.

Eventually, after the guests (and the audience) are thoroughly confused,  Wadsworth reveals that he knows how it all happened.

Now, in the theaters, if you went to see this film, you were treated to one of three potential endings.  So if you saw this in the theater you may not know of the other two possibilities.  In the interest of fair play, I won’t tell you ANY of the endings.  You have the opportunity to see them all on the DVD, however, and you won’t have to buy three separate copies of the DVD to see them all.

There are some interesting little tidbits throughout.  But, just to note, Communism is a red herring.

The highlight is Curry’s portrayal as a butler, of course, but each of the guests, although essentially a caricature, have their moments.  Mull as the colonel is one of my favorites.  And Brennan is always a treat in whatever movies I see her in.