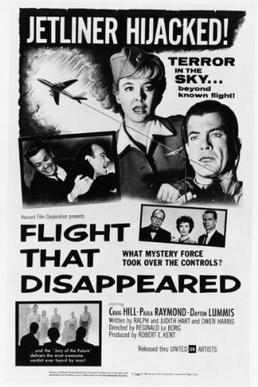 Terror in the Sky….beyond known flight!

Just when you thought you explored all the sci-fi films of the 1960s, “new” titles appear in a book or while browsing online. For us, it was The Flight that Disappeared that magically appeared. If the title is new to you, too, it is probably because it was never released on VHS or DVD….and because it was produced by a not-so-famous independent production company: Harvard Film Corp.

The film is not worth going out of your way to track down but if it is easily accessible then give it a peek, you’ll find it to be better than most B-films.

The movie begins on a jetliner en route to Washington D.C. Onboard is a nuclear physicist, a rocket expert, and a mathematical genius (Craig Hill, Dayton Lummis, Paula Raymond) who are all going to attend a conference at the Pentagon. Also onboard is a blind woman and her rather crazy husband (Meg Wyllie and Harvey Stephens), a pretty stewardess (Nancy Hall), and a handsome Dick Tracy-ish pilot (John Bryant). The flight begins smoothly until a mysterious force takes over the controls from the pilot and he finds the plane climbing on its own. It keeps right on climbing and climbing and climbing, even beyond the altitude that the jet was capable of withstanding. As the poster proclaims….What mysterious force took over the controls? It is at this point in the script that the film moves from an airplane adventure theme to science-fiction. Its plot may be a bit far-fetched for some, but there is a nice twist at the end that helps to ground it a bit more.

The Flight that Disappeared has a runtime of only 72 minutes so it is a breeze to watch and the film features a great cast of B-actors. Craig Hill did a small number of films in the 1950s before he moved to Spain and became a lead actor in spaghetti westerns. He is best known for playing P.T. Moore in the television series The Whirlybirds (1957-1960). Paula Raymond had a long career in film and television but had few leading roles. Instead, she is best known for her appearances on Perry Mason (and oddly enough, she resembles Della Street in this film).

John Bryant was also a frequent guest star on Perry Mason, but he is best known for playing Mark Fleming, the nephew of bank president John Fleming in the Vincent Price horror classic The Bat (1959) which, like this film, was released by Allied Artists. Interestingly, Harvey Stephens, who played John Fleming in The Bat, has a small part in this film, too. And lastly, there is Dayton Lummis, a very recognizable character actor who should have been given better parts than what he usually played. Right after filming wrapped on The Flight that Disappeared, Lummis teamed up with Craig Hill for another Harvard Film Corp. production – the drive-in classic Deadly Duo.