“When it flies, someone dies!”

Mystery writer Cornelia Van Gorder (Agnes Moorehead) has just rented a secluded country estate known as “the Oaks” and finds herself involved in a real-life mystery when she learns that one million dollars has been stolen from the local bank and the loot is believed to be hidden somewhere in the Oaks. Cornelia and her houseguests decide to hunt for the money but need to act quickly because a masked killer known as “The Bat” desperately wants to find it himself and he prowls the house at night in search of the money!

The Bat was originally written in 1920 by America’s foremost mystery writer Mary Roberts Rinehart. The novel was an enticing mixture of mystery, horror, and comedy. It was one of the first stories to feature an “old dark house” mystery with its creaky mansion, secret passageways, hidden money, and mysterious masked killer, and it spawned a whole genre of similarly themed stories and films, including The Cat and the Canary.

“The Bat” was so popular it was made into a play by Avery Hopwood and Rinehart that same year and ran for 867 performances on Broadway. Roland West brought it to the screen in 1926 with Emily Fitzroy and Louise Fazenda playing the leads. This silent horror film caused quite a sensation in its time, so in 1930, with the advent of sound, Roland West decided to duplicate its success by filming another version, cleverly calling this remake The Bat Whispers.Grace Hampton starred as Ms. Van Gorder with Maude Eburne playing her maid Lizzie and Chester Morris as Lt. Anderson. 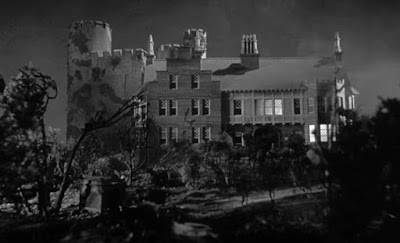 The Bat Whispers was notable for inspiring Bob Kane to create his own masked character based on the Bat: Batman. His comic hero not only had a similar name but also dressed in black, wore a cape and used the Bat’s famous batwing logo silhouetted against a circle of light.

“There’s a storm comin’ up and it’s gonna be a snorter!”

Allied Artists 1959 release of The Bat was the third remake and, as the old saying goes, “third time’s a charm”. This budget production is a fun adaptation chock-full of red-herrings, inventive story twists, and clues that you can puzzle out for yourself. It’s perfect entertainment for a dark and stormy night and, like a corny drive-in film, you can watch it over and over and never tire of it. This is in no small part due to the presence of its two leading actors – Vincent Priceand Agnes Moorehead. These legends always gave 100% to all of their performances and they lend this minor production a touch of class. 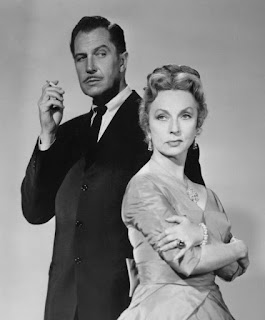 Agnes Moorehead was an exceptional actress. She had a long career in radio where her distinct and highly educated voice was put to good use in thrillers such as “Sorry, Wrong Number” (Suspense, May 25, 1943). She made many films in Hollywood as a supporting player but was rarely given a lead, so it is good to see her in a starring role and Cornelia Van Gorder was a tailor-made part for Moorehead. Ms. Van Gorder is a middle-aged mystery writer with a pithy sense of humor. She’s intelligent, strong-willed, and not easily scared by the Bat. “I have a gun – and I know how to use it!”, she declares. It would have been nice to see a series of mystery films developed around this character.

Vincent Price was given top billing even though he plays a secondary role in The Bat, that of the suave and suspicious Dr. Malcolm Wells. Price added a Shakespearian touch to all of his parts that made his characters seem admirable no matter how vile they may be. This quality made him one of the most beloved villains of the silver screen and, throughout the 1960s and 1970s, Price was cast primarily in horror films such as The House of Usher, Tales of Terror and The Mask of Red Death. Dr. Malcolm Wells is not a sinister character but he is cunning. He is also one of the prime suspects in the story, hence, Price’s facial expressions and the deliverance of his lines suggest that his character has wicked intentions.

As far as villains go, the Bat is quite a character himself. He not only terrorizes women but uses a clawed glove to rip their throats. And, like most movie killers, he only strikes at night.

“Some say the Bat leaves no fingerprints!” – Lizzie
“Well, that’s understandable. Having no face he probably has no fingers either.” – Cornelia 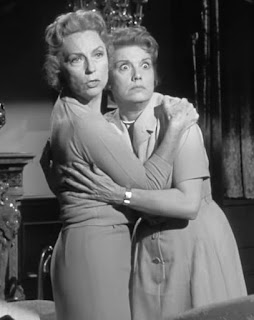 The Oaks is the perfect setting for a mystery writer and, shortly after the murders begin, Ms. Van Gorder decides to write a story about this “fantastic criminal” and the events that happened over the past week.

Along with Ms. Van Gorder in the house is her faithful maid Lizzie, portrayed by Lenita Lane (Castle in the Desert), her reliable chauffeur-turned-butler Warner (John Sutton), and a stern housekeeper (Riza Royce). Also in the cast is Gavin Gordon as the hard-nosed Lt. Anderson, Harvey Stephens as bank president John Fleming, John Bryant as his nephew Mark, and Darla Hood (The Little Rascals) and Elaine Edwards as the weekend houseguests.

Crane Wilbur (House of Wax) wrote the screenplay for The Bat and also directed the film. Wilbur was the cousin of Tyrone Power. Directing was not his forte so there are some inconsistencies in the story but he created a tense mysterious atmosphere and the film moves at a swift pace with plenty of excitement in every scene. He also injected the script with a number of twists and turns….so many that you are left wondering if the man revealed as the “Bat” at the end of the movie was indeed the same man masquerading as the killer throughout the film. That’s one mystery that Crane Wilbur just leaves dangling.

Constance Metzinger runs the website Silver Scenes, “a blog for classic film lovers.” This post originally ran in May and is being reprinted as part of this year’s Halloween celebrations.