“Hunting for gnomes in the Gnome-Mobile….”

Jaspar (Tom Lowell) and his grandfather Knobby (Walter Brennan) fear that they may be the last of the gnomes residing in the giant redwoods of California. As many of us know, gnomes live forever, but Knobby is so disheartened at the thought of his grandson never marrying that he loses his will to live. This causes him to become “see-throughish.”As he fades away more each day, Jaspar, in desperation, seeks the aid of a doo-deen (human) that happens to come to the forest on a picnic one day – little Elizabeth (Karen Dotrice).

Knobby, who is at first skeptical of trusting humans, agrees to accompany Elizabeth, her brother Rodney (Matthew Garber), and their grandfather (Walter Brennan, again) in their antique Rolls-Royce to be transported to a virgin forest where they hope to find more gnomes. But imagine Knobby’s surprise when he discovers that the old man who is escorting him is none other than D.J. Mulrooney, the owner of Mulrooney Timber Company which cut down most of the woods in his home forest!

The giant redwoods of California provide the backdrop for one of Walt Disney’s most delightful fantasy films of the 1960s. This was one of the last films that Walt Disney was able to personally oversee. He passed away shortly after the picture’s release. 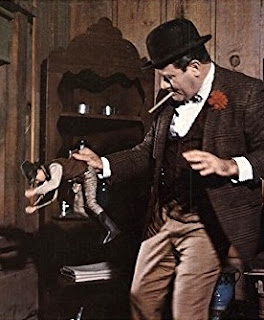 The Gnome-Mobile is packed to the brim with fun moments and is never tiresome. Eustace Lycett, Disney studio’s resident magic-maker, created the convincing special effects, utilizing the same method he did in Darby O’Gill and the Little People (1959) to make the gnomes look like they were only two-feet tall.

Our father was an auto mechanic so, growing up, we watched a lot of films that featured cars or chase scenes and this was a childhood favorite of ours. The Shaggy Dog was one of the first films Walt Disney made that featured a car chase as a climax and it would become a trademark of the Disney comedy films throughout the 1960s and 1970s. The Gnome-Mobile features a particularly exciting chase sequence through the forest with Richard Deacon in a Cadillac pursuing Grandpa Mulrooney and the children in their Rolls Royce. Bouncing along the dirt road, the Cadillac sheds its hood, fender, bumper, wheels, and doors as the race gets faster until it finally lands on the top of a pile of wrecked cars at a junkyard. A similar chase sequence would later be used in .
The Love Bug.

The Gnome-Mobile also features great color styling and art direction by Carroll Clark (Mulrooney’s hotel is especially fetching to the eye) and Bill Thomas created the colorful costumes which included the bright pixie-like dresses of the lady gnomes at the end of the film.

Like most Disney films, the casting is spot-on. Michael Garber and Karen Dotrice (billed as “The Mary Poppins Children”) are excellent and their acting is so expressive for their ages. Walter Brennan is convincing in his dual-role and the rest of the cast is made up of veteran character actors: Sean McClory as Horatio Quaxton, a disreputable owner of a traveling freak show; Ed Wynn as Rufus the gnome, Richard Deacon, Jerome Cowan, Charles Lane, Maudie Prickett, Ellen Corby, and Frank Cady and Alvy Moore (both regulars from Green Acres). 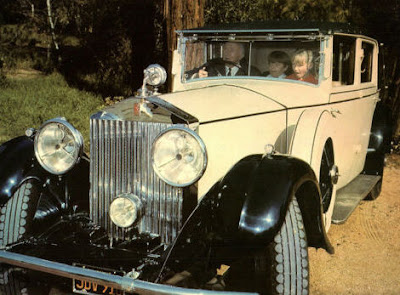 The Gnome-Mobile shows us just how much fun a picnic in the woods can turn out to be, especially if you meet a gnome along the way. And if you want to take a ride in the Gnome-Mobile itself, head on over to the Gilmore Car Museum at Hickory Corners, Michigan where the Rolls-Royce Phantom II that was used in the film, as well as the larger-than-life interior replica, are on display.