Often when a film becomes a smashing box office success, the production studio that made it believes they can replicate its ticket sales with the next generation, and so, every 15-20 years the same titles crop up with new casts and slightly modified scripts. State Fair is one such film. The 1932 novel by Phil Strong was brought to the screen in 1933 as a Janet Gaynor/Lew Ayres hit for Fox Studios. It told the story of the Frake family and their adventures at the Iowa State Fair, focusing on the romantic entanglements that the two teenage children, Margy and Wayne, get themselves into. Richard Rodgers and Oscar Hammerstein II then set this story to music for the 1945 Technicolor musical adaptation starring Dana Andrews, Jeanne Crain, Vivian Blaine, and Dick Haymes. This was a most entertaining production and it set the bar high for future remakes, one of which was State Fair (1962).

For this picture, Fox took the opportunity to cash in on the popularity of two of the top singing stars of the era – Pat Boone and Bobby Darin – and paired them up with two pretty gals, Ann-Margret and Pamela Tiffin, to make what they considered prime bait for the younger generation. To lure in the older crowd, one of Fox’s biggest stars of the 1940s, Alice Faye, was cast as Melissa “Ma” Frake and Tom Ewell, a popular stage and screen actor of the 1950s, was cast as Papa Frake. Richard Rodgers also added a few extra tunes to spice up the picture. And so, with an ideal cast, a dependable and well-used story, and lush Cinemascope, the brass at Fox thought this remake would be a box-office hit. They thought wrong. The film lost nearly a million dollars. 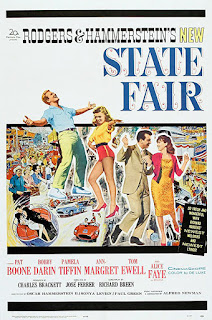 In life, imitation is often the sincerest form of flattery but in Hollywood it is a sign of unimaginative filmmaking. The 1962 version of State Fair tries so hard to have the bucolic charm of its predecessors that it fails to stamp its own impression, which is unfortunate since it really only disappointments when it attempts to duplicate the 1945 version. It is during these scenes that the acting seems bland and uninspired. The cast is uncomfortable in their roles and the entire production comes off as an apology to the audience for having such a “hokey” old-fashioned plot to work with. They should have taken a cue from Bye, Bye, Birdie (1962) a musical which oozes with small-town naivety and yet is perfectly at home in its own generation. There certainly is nothing hokey about a fair….unless you make it out to be.

Screenwriter Richard L. Breen adapted Sonya Levien and Paul Green’s original screenplay in an attempt to inject some new verve into the story and moved the Iowa setting to Dallas, Texas which, not surprisingly (since Texans do everything big) features “the largest state fair in America”. It was filmed on location at the modern Dallas fairground which boasts nearly 100 acres of exhibition halls, dance and dining venues, and a stock car track.  Pat Boone gets to try his racing skills on the track and Ann-Margaret performs a show-stopping rendition of “Isn’t it Kinda Fun” at a Hollywood Bowl style outdoor theater on the fairgrounds. The giant 52′ tall Big Tex who booms his welcome speech to the fairgoers, continues to greet visitors today. 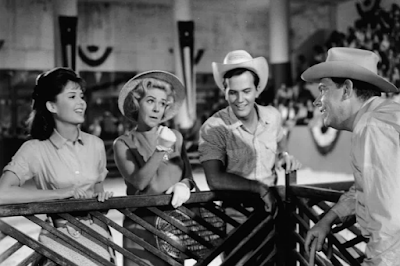 Pat Boone, who could croon as well as Dick Haymes, and Ann-Margret were the only redeeming actors in the film. They added a genuine warmth and sincerity to their parts, which the rest of the cast should have mirrored. Pamela Tiffin, sweet as she looked, was no comparison to Jeanne Crain. Her airy interpretation of Margy lacked a depth of character, and one had to wonder what she saw in Jerry Dundee (Bobby Darin) who seemed bent on simply making her one of his conquests. Tom Ewell did an adequate job in the role that Will Rogers originally performed in the 1933 version, but Alice Faye was wasted – and wooden in the few scenes she had. She had signed for the part believing that she would be reunited with her screen partner, Don Ameche, and be directed by Henry King (who filmed the original ’33 version). Instead, Jose Ferrer took the reins….and found himself riding a dead horse. Or was he the man to blame for killing it?

The 1962 version of State Fair is currently unavailable on DVD and Blu-ray. We will be sure to update this piece when it is released.