Joan Davis was a master of zany comedy. She was the feminine variant of Danny Kaye, Oscar Levant and Billy de Wolfe all rolled into one. But mostly she was uniquely Joan Davis: Rubber-faced, loose-limbed and shamelessly outrageous. A lost species from the bygone era of vaudeville. 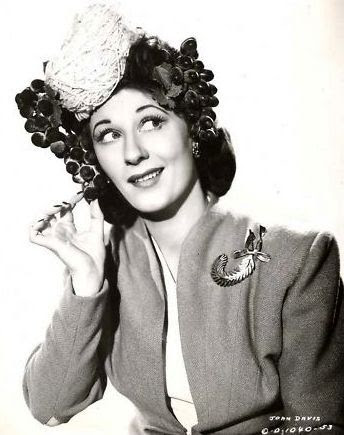 It was in vaudeville that Joan got her start. Billed as “The Toy Comedienne” she toured all around the states during the 1920s and by the time she reached her upper teens had performed on virtually every vaudeville circuit in the country. Her broad sense of comedy appealed to the masses and after entering films she quickly became one of the most popular comedians of the 1930s and 40s. Some critics hailed her as “the world’s funniest woman”. In over 45 motion pictures she exercised her raucous voice and muscle-straining grimaces in wet-your-pants-funny gags.

Like Eve Arden at Warner Brothers, Twentieth Century Fox often utilized Davis as “comic relief” to their box-office stars, Shirley Temple and Sonja Henie. She played second-fiddle to Alice Faye in several films ( On the Avenue, Wake Up and Live, Tail Spin, Sally, Irene and Mary ) and got to take center stage in a number of musical showcases such as Around the World and Sun Valley Serenade where she performed solo in several short skits.  It was in these vaudevillian style skits that she really excelled. In the 1937 Sonja Henie film Thin Ice she performs ‘Olga from the Volga’ and ‘My Swiss Hilly Billy’ with adroit burlesque.

“Gee, if I only had your face. You know, when I was born, my father took one look at me, called up the insurance company, and said ‘I want to report an accident.'” ( Show Business )

It was after leaving Twentieth Century Fox however that Joan Davis got starring roles in films at other studios such as Republic Pictures and RKO. In 1941 she teamed up with Jinx Falkenberg in Two Latins from Manhattan, a film that proved to be enough of a success that the two were teamed again in Two Senoritas from Chicago (1943). She was paired with Eddie Foy Jr. in Yokel Boy (1942), Jack Haley in George White’s Scandals (1945) and Eddie Cantor in the wonderful Show Business (1940) and If You Knew Susie (1948), one of Cantor’s last films. 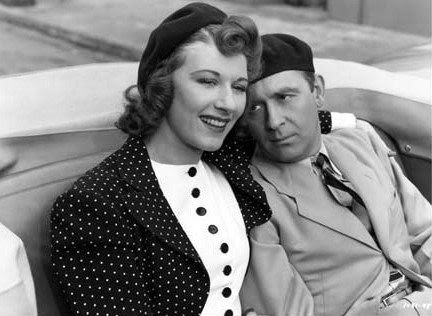 Although she was a versatile comedian and could perform in any scenario with success, it was in Joan Davis’ dance performances that her forte in humor lay. She would enter a dance with such an expression of seriousness and then as the number would continue, and get progressively worse, it would clearly turn into a farce, with Joan usually ending up on her rump by the conclusion of the dance. The “Swan Lake” dance with Lou Costello in Abbott and Costello’s Hold That Ghost (1941) was Joan at her prime…no matter how many times that scene is watched a gigantic belly-laugh ensues. It remains one of the greatest shticks in any Abbott and Costello film. 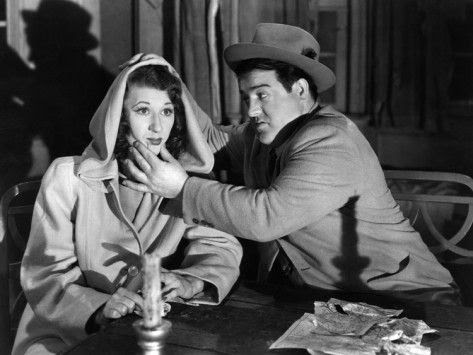 In the mid-1940s she starred in several comedies written especially to suit her unique comedic style – Kansas City Kitty, a musical about a piano teacher literally falling for her music publisher, played by none other than Bob Crosby, and Beautiful But Broke, where she plays a secretary who slaps together an all-girls orchestra at short notice. 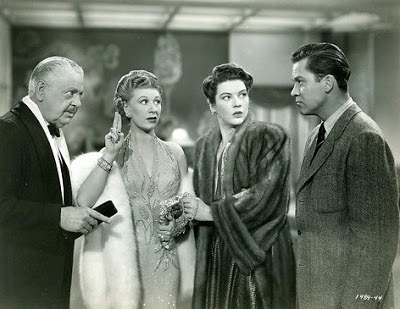 Over at Universal Joan Davis made two little gems, She Gets Her Man  (1945) , a fast-paced mystery about the daughter of a former police chief having to fill his shoes and catch a mysterious blow-gun killer at large, and She Wrote the Book (1945) , a humorous tale revolving around a college professor who takes the place of a steamy bestselling author to save the real author from embarrassment only to receive a bump on her head and suffered a brief case of amnesia where she believes she is the scandalous author. Oh my. 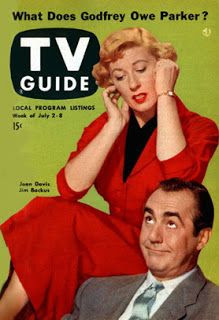 By the late 1940s, the public’s taste in humor was changing and the wild and wacky slapstick of Joan Davis wasn’t selling tickets anymore. Yes, it was time to move to television! Anything goes there. Her last film was Harem Girl (1948) and then Miss Davis took the plunge…all the way. She formed her own production company and vigorously plugged herself as America’s favorite comedienne starring in the now-obscure I Married Joan television series. The show featured the misadventures of a scatterbrained housewife married to a lawyer, a pre-Mr. Magoo Jim Backus. Whilst on-air there was an all-out war between NBC’s I Married Joan and CBS’s I Love Lucy which premiered one year prior. The stations battled it out and Lucy won, hands down.

Despite the results for the shows, if Lucille Ball and Joan Davis were to go head-to-head in a battle of the dippy dames, Joan Davis would emerge the victor. She was the batty blonde to top all.

Today Joan Davis is little known, even among film buffs. Cable channels have neglected to play her films and the I Married Joan series has yet to get an official full series DVD release. But she is a delight to watch and in my opinion remains one of the greatest film, TV and radio comediennes.

This post originally ran last year and is being reprinted as part of our ongoing tenth anniversary celebrations.