Author’s note: This is Spinal Tap is a pretty raunchy movie. If you are the least bit prudish, I suggest you avoid this movie. In fact, it might be prudent to skip reading this review, as I will be quoting several lines that might offend some sensibilities, but are necessary to convey why I think this movie is so funny. Be forewarned.

This movie is set up as a documentary — or as director Marti DeBergi (Rob Reiner) puts it, a “rockumentary.”  What it really is is a “mockumentary.” There is no real band called “Spinal Tap” (or at least there wasn’t in 1984). All of the characters in the documentary are actors playing parts in what is posed as a documentary on the 1983 musical tour of “The Loudest Band Ever”, Spinal Tap. Reiner, as DeBergi, follows with a film crew documenting the tour, as well as carrying on some intimate conversations with the main core of Spinal Tap: David St. Hubbins (Michael McKean), Nigel Tufnel (Christopher Guest) and Derek Smalls (Harry Shearer). It should be noted that all three actors were musically inclined, and they have since actually toured and produced a couple of albums under the name Spinal Tap.

If you are blessed with a copy of the DVD, a special feature has commentary from the three main core actors.  But instead of commenting as actors, they make the commentary in character as St. Hubbins, Tufnel and Smalls. This in effect gives you two movies in one, as, in the chronology of the film, the members of Spinal Tap supposedly were disenchanted with what DeBergi had done and make snide comments along with the commentary. 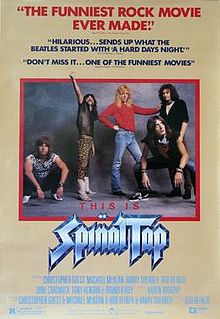 Debergi (film director Rob Reiner) introduces the theme of the movie by telling the audience that he began with a plan to capture “the sights, the sounds, the smells” of a rock band on tour.  Ostensibly,  the Tap (as I will refer to them for brevity) were going on tour to promote their 15th album Smell the Glove.

This movie would be hard to encapsulate as I am usually wont to do. Instead, I have decided to highlight some of the funnier bits.  According to my information, the movie never really had a script as such.  There was a  plan, of course, but most of the film was done impromptu, as such, with only a basic premise for each scene.

In one of the best (and more memorable scenes) Nigel (Guest) is showing DeBergi (Reiner) his collection of guitars, and his improvised amplifier.  The amp has been modified to go to “11”. 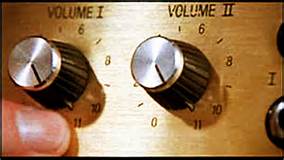 A brief side note: I enjoy being funny, even when the rest of the room might not understand it.  I was in a hotel last year that had 11 floors.  I got on the elevator with a young couple and the woman said to her male companion: “We’re on 10.”  And I waited a second, then said “These go to eleven.”  I got a quizzical look from the woman, but the guy smiled.  I said to him “I don’t think she got it…but you did, didn’t you?

One of the running gags throughout the movie is the rather bizarre accidents that happen to the drummers in Spinal Tap.  This is a parody of the actual phenomena of the life expectancy of drummers in rock bands, and this may be one of the  sensitive points to some of you.  But the Tap has had some really strange deaths of drummers.  One “died in a bizarre gardening accident”.  Another choked on vomit, or, more accurately, “someone else’s vomit”.  Another drummer exploded on stage.  (OK, I will admit it’s rather sick, but in the context it’s funny.) 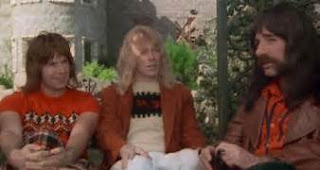 At one point, Debergi talks with the band about the reviews of their previous albums.  Intravenous de Milo was reviewed as “The tasteless cover is a good indication of the lack of musical talent within. The musical growth of this band cannot be charted.  They are treading water in a sea of retarded sexuality and bad poetry” (to which Nigel responds “Well, that’s just nitpicking, isn’t it?”)  The Gospel According to Spinal Tap (which actually shows the album as being titled “Rock and Roll Creation”) had a review that said “The pretentious ponderous collection of religious rock psalms is enough to prompt the question ‘What day did the Lord create Spinal Tap, and couldn’t He have rested on that day, too?'”   Shark Sandwich got only a two word review, “Shit Sandwich”.

The band has a continuing decline in attendance and many cancelled shows over the course of the film.  This leads to the decision to a revival of performing a rock opera, “Stonehenge.”  Nigel draws a diagram detailing a mock-up for the concert, which is supposed to be a replica of a portion of Stonehenge for the concert.  But on the drawing  he inadvertently writes the dimensions as 18″ instead of 18′.  Of course, the replica is built to specifications, but the band doesn’t know about it until they are performing on stage.  The replica comes down, accompanied by a couple of dwarves dressed as druids dancing around it.

One of the running gags throughout the film is the delay in the release of the album.  The executives are having fits and some markets are refusing to carry the album because they find the cover offensive. And believe me, as they describe it (which you never actually see), it is pretty racy and sexist.  The executives decide to release the album as completely black. (Note: this was years before Metallica released their black album). The consternation of the band over the cover is a pretty funny scene.

Eventually all the mishaps with the band and their manager, Ian Faith (Tony Hendra), leads to the dismissal of their manager.  St. Hubbins’ girlfriend, Jeanine (June Chadwick), takes over as manager. Jeanine represents the interference usually associated with The breakup of the Beatles, due to alleged conflict that arose when John Lennon began a romance with Yoko Ono. None of the other band members really like her, especially Nigel. A very funny scene happens towards the end of the movie where Jeanine has substituted a show that was cancelled by booking them to play a dance on an Army base. In the midst of interference from loudspeakers at the base, Nigel leaves, disgusted and quits the band. 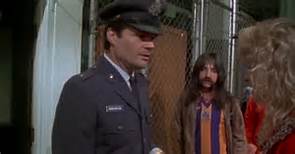 The movie is absolutely hilarious, especially when you realize that none of the actors playing three main band members (McKean, Guest, and Shearer) were actually English, but they manage to pull it off exquisitely. There are lots of recognizable faces in the movie as other characters, some of which you may know by name and some which may be familiar to you by face even if you don’t know their names. These include Anjelica Huston, Ed Begley, Jr., Fran Drescher, Fred Willard, Paul Shaffer, Howard Hesseman, Paul Benedict, Bruno Kirby, Patrick Macnee, Dana Carvey, and Billy Crystal.

I encourage you to give this movie a shot, but as I stated in the preface, if you are the least bit prudish, I will understand if you choose to avoid it.  It’s not as offensive as a few of the other movies I’ve reviewed over the years, but it does tip the scales in some places.