There’s just something satisfying about watching an older film and being nearly blown away by the techniques and visual stimulation used in something that is considered to be “old.” I have seen my fair share of Alfred Hitchcock films, but fair share compared to his “girthy body“ of work is nearly a sliver in the big scheme. I love the films of his that I have seen, but I think I have been much too lax in broadening my Hitchcock horizons and for no good reason. I get this way whenever I watch one of his films too and last time was with Strangers on a Train, a film that I completely adored and one that made me think I should watch more of his films…much like I am thinking and telling you right now.

Maybe it’s a good thing that I take time between his films, maybe it makes me appreciate them more when I do see them? If I went into another one of Hitchcock’s films right now, all high off the  celluloid extraordinariness – would I be disappointed? Perhaps, but that’s just bullshit excuses and I think this cycle all ends with a film by the title of Dial M for Murder. Words cannot express how much I enjoyed this film, but words expressing my enjoyment are kind of key in writing about it, so I better come up with something I guess.

Tony (Ray Milland) has concocted an intricate plot to murder his wealthy, but unfaithful wife, Margot (Grace Kelly). Tony was a professional tennis player and spent a good portion of their marriage playing in tennis tournaments, while his beautiful wife sat all alone back home in jolly ol’ England. Bored and before soaps, Margot needed a little “manly attention” while Tony was away and she got it from an American crime novelist named Mark (Robert Cummings), who was staying in England for a short period of time. Tony knows of this adulterous event and along with Margot being extremely wealthy, his motivations are all lined up and gives him all the reasons one would need to have his wife murdered.

Mark is now back in England for a visit and has met and befriended Tony to an extant, but that friendship is all a facade on both of their respective ends as Mark is really in love with Margot and Tony knows about their affair. How Tony found out in the first place was a letter that Mark had written to Margot when he left England to go back to America –  Tony got his hands on the letter and actually uses it to play an integral part in his scheme to kill Margot. That’s kind of the short of it all as the plot for this film is very intricate, but more so, spoiling any of it would be reprehensible on my part no matter how old this film may be.

Most of the focus is on these three characters and almost the entire film is set in a singular location, which would be Tony and Margot’s flat. Much of Dial M is filled with exposition and most of the movie is characters talking about or explaining something to move the plot along. Sounds kind of boring…one location, a few characters, and nuttin but talking. However, this one is far from boring and I was 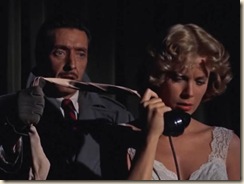 completely intrigued by the intricate details of every move that each character makes, or plans on making. Tables are constantly turned, backs are stabbed multiple times and there is no clear indication as to how things may turn out in the end.

Dial M for Murder is based off a stage play by English playwright Frederick Knott, who also wrote the film’s screenplay and the detail put into it is incredible. Every detail is meticulously thought out and as each character explains their plan, it is impossible not to be amazed by the brilliance of it all. Tony’s perfect murder scheme is so well thought out and so tight, that there is no way it wouldn’t work in his mind and this almost gives him an arrogance about the whole thing. Arrogance leads to mistakes and when one is made, the plot thickens as well as the mystery and tension.

Even with all of the long periods of talking throughout the film, Hitchcock is somehow able to make each of these dialogue stretches seem different from one another with a multitude of techniques and camera angles. Dial M is set in one location, but even more so, one main living room and the way that room is shot in so many different ways is an astonishing sight. One long scene towards the film’s opening has Tony explaining his murder idea to an unwilling accomplice – as Tony starts acting out how it should all go, the camera jumps to a high angle, almost top down view and in a voyeuristic way, follows every movement that Tony makes. It is quite brilliant and really draws you in to what Tony is saying, which is very important, because the entire film relies on being captivated by the narrative.

There are so many different little stylistic flourishes that keep you from just staring at a couple of talking heads and no matter how interesting what is being said is, without the visual prowess, it could get a little boring. It certainly doesn’t hurt the film that the acting is superb by all involved either and especially with these long scenes of heavy dialogue that are often delivered for lengthy periods of time with very few cuts.  It plays exactly like a stage play and considering that is where the source material stems from, the feel is more than fitting.

Dial M for Murder is a perfect case of all style AND substance and that is a balance not struck often enough. When this balance is found in a film that’s 55 year’s old, it just makes it that much more impressive to me…I don’t know why that is exactly. Probably naivety, or the fact that I have a predetermined thought of movies or “pictures” from that era and how they are stylistically. Hitchcock was leaps and bounds ahead of the curve and it is great to once again be shown why he was such a master, by viewing the phenomenal Dial M for Murder.

Matt House is a Massachusetts born fan of all cinema genres and eras but has a love affair specifically with horror, cult and foreign films. He writes for the online magazine BThroughZ as well as Paracinema…The Blog and his own personal blog, Chuck Norris Ate My Baby.