Film producer/director Irwin Allen let audiences dive deep into the waters of adventure with Voyage to the Bottom of the Sea, his second of three feature films that he made at 20th Century Fox studios in the early 1960s. Prior to gaining a reputation as “The Master of Disaster” because of his disaster-themed films of the 1970s, Allen tried his hand at writing, producing and directing adventure pictures. His first production for Fox – Lost World (1960) – was co-written by Charles Bennett and its success at the box-office led to the two men collaborating on another Jules Verne-like story. They took some inspiration from 20,000 Leagues Under the Sea and created a clever story about a modern era atomic submarine

Walter Pidgeon stars as the cigar-chomping Admiral Nelson, inventor and commander of the newly-built atomic sub Seaview. The Seaview is on diving trials in the Arctic Ocean when they discover boulder-size pieces of ice crashing into the sea around them. They surface and find that temperatures are over 100 degrees and the sky is aflame. A meteor shower had pierced the Van Allen radiation belt and caused it to catch on fire. Admiral Nelson and his right-hand man, Commodore Emery (Peter Lorre) believe that the Earth can be saved from burn-up if a missile were to be shot into the Van Allen belt to create an explosion. According to their calculations, this missile can only be launched from the Mariana Islands, and so the Seaview races to the south to reach the islands before the entire world burns. 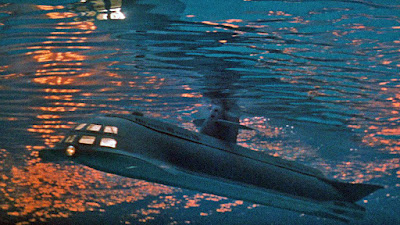 Along for the ride is Dr. Susan Hiller (Joan Fontaine), a psychologist who is studying crews for their reaction to stress, Vice-Admiral B.J. Crawford (John Litel), and Congressman Parker (Howard McNear). The voyage progresses smoothly until doubts begin to arise in the mind of Captain Lee Crane (Robert Sterling) as to whether the admiral is making a sound and safe decision. Lt. Connors (Barbara Eden) has complete faith in the admiral but cannot explain the unusual happenings onboard the Seaview…acts of sabotage that appear to be of Admiral Nelson’s doing.

Voyage to the Bottom of the Sea is a fun adventure flick packed with action. The race-against-time element makes the story exciting enough, but Allen threw in a touch of mystery with the added story of the saboteur. There are also two octopus attacks and a great mine-field sequence.

The Van Allen radiation belts had only recently been discovered when Irwin Allen began writing Voyage to the Bottom of the Sea, and so much about them was still unknown. The idea of the Van Allen belt catching on fire was later proven to be impossible, but at the time, it probably sent shivers down audiences thinking about it being an actual possibility.

Even though most of the film takes place within the confines of the Seaview, the film never feels stagebound. The sets, created by Herman Blumenthal, were very imaginative (they were later reused for the television series). The Seaview itself is an especially good design. 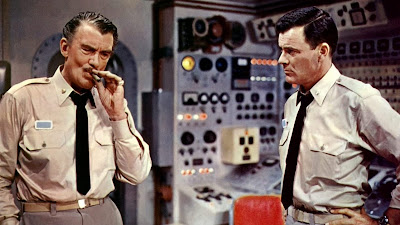 Irwin Allen plunged $1.5 million dollars into the making of Voyage to the Bottom of the Sea and it paid off handsomely. Critics gave the picture mixed reviews but audiences loved it and the movie raked in over $8 million dollars.

Teen singing-sensation Frankie Avalon helped to lure in the young female audience. His part was not very dramatic and, surprisingly, he didn’t sing in the film but you can hear his voice crooning the opening credits.

Also in the cast was Michael Ansara (who fell in love with and married Eden after making the movie), Regis Toomey, Henry Daniell, Skip Ward and Mark Slade.