In this post, Constance Metzinger shares her opinions on the 1933 favorite The Private Life of Henry VIII.
The name of Charles Laughton has become synonymous with that of King Henry VIII, a role that he portrayed both onscreen and on stage. Laughton was 34-years old when he played the part of this beer-gulping, head-chopping monarch, and his delightfully raucous portrayal remains a highlight in a career of top-notch performances.
British film-maker Alexander Korda had his first international success with this peek into the “private life” of the oft-married monarch King Henry VIII. The picture should have been titled The Private Loves of Henry VIII for the focus of much of the film is on Henry’s wives.
As the introductory written statement proclaims, “Henry VIII had six wives. Catherine of Aragon was the first; but her story is of no particular interest–she was a respectable woman. So Henry divorced her.”
We do not get to see Catherine of Aragon, instead, the film opens with Anne Boleyn (Merle Oberon), who is making preparations for her execution.

“Will the net hold my hair together when my head falls?”
Queens must think of the appearance they make to their subjects, even after death. Anne Boleyn knows her fate well enough. She recognizes the glances of affection that King Henry VIII (Charles Laughton) gives to Jane Seymour (Wendy Barrie) and realizes that his only course of action will be to have her put to death….which he promptly does.

Poor Jane Seymour has a short tenure as the king’s wife as well, but she at least dies a natural death. And then Henry spies the beautiful Katherine Howard (Binnie Barnes), a lady of the court. She is the object of affection for Squire Thomas (Robert Donat) but when she realizes that the king is smitten with her, she gladly sets her eyes upon the crown instead. Love is freely sacrificed to the god of ambition. 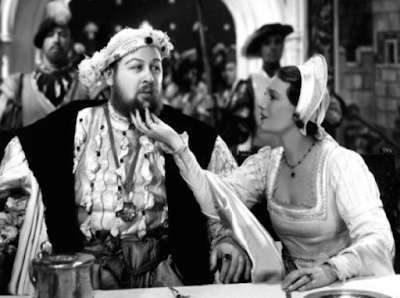 It is Katherine whom we are led to believe that the king loved the most among his many wives, but when he discovers her relationship with Squire Thomas, he nevertheless sets her head rolling. Anne of Cleves (Elsa Lancaster) and Katherine Parr (Everley Gregg) take turns wearing the band before Henry disgustedly exclaims in his old age, “Six wives – and the best of them was the worst of them.”
The Private Life of Henry VIII is filled to the brim with delicious dialogue by Lajos Biro. The picture leans more toward satire than drama and it is this winning combination of humor amidst such serious British history that makes The Private Life of Henry VIII so novel and so very entertaining. It was one of the first films from England to become successful in America and throughout Europe. With his earnings from the production, Alexander Korda went on to launch London Films, one of England’s most prestigious film studios. 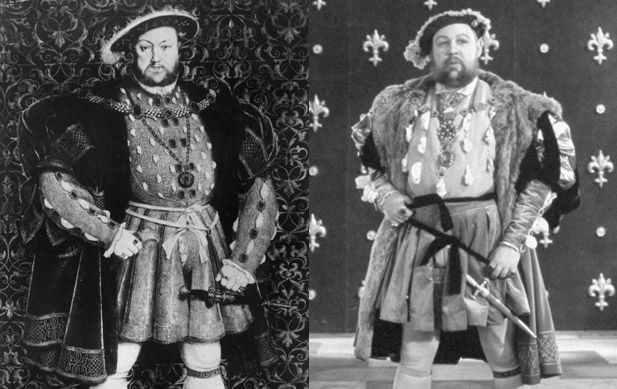 In spite of the plot’s focus on the wives of the enormous monarch, it is King Henry himself who takes center-stage throughout the film due to the magnificent presence of Charles Laughton. The actor bears a striking resemblance to the real Henry and his mannerisms most certainly must have matched that of the king. Nearly twenty years later, he would play King Henry VIII again in Young Bess (1953).
In fact, the entire casting for The Private Life of Henry VIII was excellent. Binnie Barnes gives an alluring performance as Katherine Howard and Merle Oberon, too, makes an impression with such brief screentime. Elsa Lancaster has a wonderful part as one of the few wives that Henry did not bed. Her sequence – and her clever method of remaining a virgin – is one of the most amusing in the film. And lastly, dear Robert Donat gives a rare supporting role and offers a hint to the audience on what a great leading man he will soon become.
Also in the cast is John Loder, Miles Mander, William Austin and Lady Tree.