Philip Yordan‘s western novel Man of the West was brought to the screen in beautiful Cinemascope as Gun Glory (1957) with the great Stewart Granger taking on the lead role of Tom Early.
It is 1880s Wyoming, and Early has just returned to the town he calls home after spending years away attempting to win a fortune gambling. He has gained an unwarranted reputation of being a gunslinger and is known in town as the man who “enjoys killing”. Early is surprised when he goes to his homestead and discovers that his wife has died and his 17-year-old son (Steve Rowland) blames him for her death.
Early wants to put away his guns, patch up his relationship with his son and return to ranching, but a local cattle baron named Grimsell (James Gregory) is bent on stirring up trouble instead. He wants to pass his herd of 20,000 cattle roughshod through the town’s valley which will destroy many of the settlers’ lands. Early warns the townspeople that they have the right to refuse him access to cross the valley but that Grimsell will not settle the dispute without a fight. After Grimsell attacks the preacher (Chill Wills) and his posse, Early decides to strap on his guns again and take on Grimsell single-handedly.

“That depends on what kind of shot you are” – Early

Stewart Granger, in spite of being an Englishman, was well-suited to the western genre. He looked good on a horse and had that rugged come-and-tackle-me appearance. Granger himself loved the American west and, several years prior to making Gun Glory, had purchased a 5,280 acre ranch near Nogales, Arizona to breed cattle. 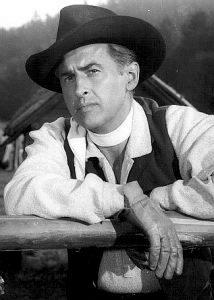 He gives a solid performance as Tom Early, making him out to be quite a noble character even though he deserted his wife and son years ago.

On its surface, Gun Glory appears to be a run-of-the-mill western, but there is a lot of depth to the characters and the relationships between them which gives the film its added appeal. The romantic angle is provided by the beautiful Rhonda Fleming who plays Jo, a young woman whom Early rescues from the leering eyes of storekeeper Sam Winscott (James Aubuchon). She needs a job and gladly accepts the task of being Early’s “live-in” housekeeper. Naturally, in the seclusion of his homestead, love blossoms between the two.

Steve Rowland also gives a good performance as Tom’s handsome son. He has to wrestle with his resentment toward his father and also his romantic feelings for Jo. Steve Rowland is the son of Roy Rowland, the director of Gun Glory.

James Gregory is delightful as the brutish baddie and the lovable Chill Wills gets an especially meaty part as the gentle but courageous preacher.

Also in the cast is Arch Johnson, Rayford Barnes, William Fawcett, Bud Osbourne, and an uncredited May McAvoy, a leading lady of the silent era.

“There weren’t any people here the last time I drove cattle through, too bad they’re here now, but they’re in my way…” – Grimsell

Philip Yordan had a reputation for being one of the best “script-doctors” in Tinsel Town. He himself worked uncredited on numerous films, patching up story plots and dialogue to make them play out better. He had an special knack for film noirs and westerns. Johnny Guitar (1954), Broken Lance (1954), The Man from Laramie (1955), The Last Frontier (1955) and The Bravados (1958) were all Yordan stories/scripts. Surprisingly, he did not write the screenplay to Gun Glory. Instead, William Ludwig got screen credit for the film even though it was written by screenwriter Ben Maddow, a talented writer who was a victim of the Hollywood blacklist.

Gun Glory is not one of the legendary westerns of the 1950s, but it ranks above many others for its fine script, great acting, beautiful color photography, and its entertaining ballad theme “The Ninety and Nine” sung by Burl Ives.