Government agent Alice Cable (Adrienne Barbeau) is sent to the swamp, where Dr. Alec Holland (Ray Wise) is working on a top secret experiment. Dr. Holland shows Alice a vegetable cell with animal DNA, telling her that his purpose is to create “aggressive” vegetation, or, more specifically, plants that can survive in extreme conditions. But when Holland has a breakthrough, a group of paramilitary soldiers led by a corrupt scientist, Arcane (Louis Jourdan), infiltrates his lab. The villains are there to steal Holland’s work, but a struggle results in an explosive compound setting the doctor afire, Holland then running outside and jumping into the swamp. Alice has eluded the soldiers, and when they come after her, they are thwarted by a still-living Holland, now a brawny plant-like creature (and played by Dick Durock). It isn’t long before Arcane mixes his own batch of Holland’s chemical with the hopes of achieving immortality.

Based on characters from DC Comics, Swamp Thing (1982) was written and directed by Wes Craven. Having previously helmed the low-budget hits, The Last House on the Left (1972) and The Hills Have Eyes (1977), Craven was provided a significantly higher budget and well-known stars, including Jourdan and Barbeau. Swamp Thing leans closer to action than any other genre, with some entertaining and impressive stunts. The movie is remembered for its campy qualities, although Craven’s intent was clearly to make a live-action comic book, exemplified by the exaggerated transitional wipes, not unlike the various and sometimes irregular frames of comic book panels. 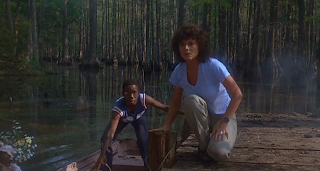 Swamp Thing is an unusual mutated monster, as he is most assuredly the hero. His identity is unmistakable to the audience, and he’s not played as a misunderstood creature, even to Alice. Her initial wariness of Swamp Thing, even if he seems to be protecting her, is tongue-in-cheek: The first thing she says to the mutated Holland is “Shoo!” while waving him away. Though Craven does touch upon Holland’s inner turmoil — the scientist realizing that his massive hands cannot handle the delicate lab work — the movie showcases a monster with noble intentions, focusing on Swamp Thing’s attempts to save Alice.

Alice, however, is not helpless, simply waiting to be saved. She swings and punches, knocking down one of the soldiers and shooting another with no hesitation. When she is cornered at a gas station with a young boy, Jude (Reggie Batts), a wise-cracking character who supplies much of the comic relief, she draws the soldiers away from the boy. The bulk of the film is the villains pursuing Alice, but she isn’t always rescued by Swamp Thing, sometimes escaping with no reinforcements. When Alice is invariably caught, she is adorned in a dress and bound much like Ann (Fay Wray) in the 1933 King Kong. The difference, of course, is that Ann was being sacrificed to King Kong, while Alice is being kept away from the monster. Barbeau is terrific as Alice, portraying a strong female typical of her roles in earlier movies such as The Fog (1980) and Escape from New York (1981), both directed by her then-husband, John Carpenter.

An ill-received sequel was released in 1989, The Return of Swamp Thing. Jourdan and Durock as the titular hero both returned, but the movie, which also starred Heather Locklear and Sarah Douglas, was treated as a comedy, a glaring shift in genres that was a misfire for audiences. The subsequent year, Swamp Thing: The Series made its television debut on USA Network. Though critics were largely unreceptive, the series lasted three seasons and has since developed a cult following. Durock reprised his role for TV. (Editor’s note: A recent revival of the series lasted a single episode before being cancelled). Composer Harry Manfredini wrote the score for a number of horror films, but is perhaps best known for his work on the popular slasher film, Sean S. Cunningham’s Friday the 13th (1980), and its numerous sequels. Cunningham also produced Craven’s The Last House on the Left, which featured David Hess, who stars in Swamp Thing as Ferret, leader of the soldiers. Hess provided memorable turns as villains in Craven’s movies, as well as two films from Italian director Ruggero Deodato, The House on the Edge of the Park (1980) and Body Count (1987/aka Camping del terrore). The actor passed away in October of 2011. 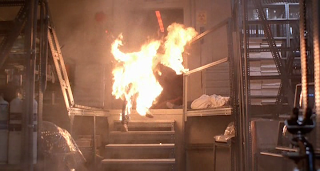 Some nudity in the film, including a bathing sequence with Barbeau, was cut to receive a PG rating, but the film was released overseas with these scenes included. When MGM released Swamp Thing on DVD, the international version was inadvertently used, despite the PG printed on the box. When the studio discovered the blunder, it quickly pulled the DVD from the shelves. MGM eventually re-released the movie on DVD, this time the original PG cut.