Cabaret started out as a Broadway show.  Actually it started out as a series of stories written by Christopher Isherwood about life in Berlin, post WWI, just before and immediately after the coming of the Nazi party.  The original play ran on Broadway for three years to the tune of over 1,000 performances, good enough for it to squeak into the top 100 of longest-running Broadway shows in it’s first run alone.  Time has been kind to many of those ahead of it.  When it closed in 1969 the play would have been ranked in the top 20 in terms of number of performances.

Cabaret as a film was a resounding success.  It made $42,000,000 against a budget of only $2,000,000 good enough to rank it sixth in the top 10 moneymakers of the year.  What beat it out?  Well, The Godfather, of course, but also The Poseidon Adventure, What’s Up Doc?, Deliverance, and Behind the Green Door. (And in case you were wondering, yes, I did include that tidbit just so I could mention Behind the Green Door in this article).

At the Oscars that year, Cabaret went head-to-head and toe-to-toe with The Godfather, both films acquiring 10 nominations in various categories, but Cabaret came out on top with eight Oscars, while The Godfather only went home with three.  Of course, The Godfather was the winner of the big one as Best Picture, but still…

One of the most impressive Oscar wins is the one that went to Joel Grey, who took home Best Supporting Actor.  In order to acquire the gold statuette he had to beat out not one, not two, but three competitors from that same Godfather dynamo.  (Al Pacino, James Caan and Robert Duvall). Eddie Albert was also in the mix for his role in The Heartbreak Kid, but I’ll bet he was a distant 5th in the voting, among that crowd.

I have stated on numerous occasions that I don’t particularly care for musicals.  The reason being that it just seems so unrealistic.  It never happens in real life where somebody will stop what they are talking about and do an exposition in song instead.  (At least, it never happens in the crowd I hang out with, anyway).  But Cabaret and Victor/Victoria both appeal to me and there is a major reason why;  in both movies the songs are just an added feature.  You could take out the songs and the movie would not suffer plot-wise.  Try that with West Side Story.

To be honest, however, there are a handful of musicals I like even with the fact that said songs are necessary to progress the plot.  I like Fiddler on the Roof.  And of course, you would have to have been living in a cave to NOT know I that I adore The Rocky Horror Picture Show.

Cabaret has some pretty good songs.  The best ones are the ones that feature Miss Liza Minnelli, but even the opening Joel Grey song “Willkommen” is a toe tapper. 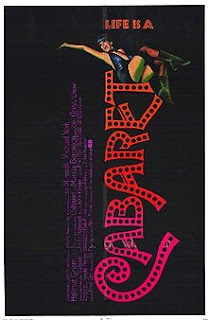 In 1931 Berlin, life is apparently rather decadent.  The free love movement of the 1960s almost pales by comparison.  Sally Bowles (Liza Minnelli),  a very free-spirited American woman, is a cabaret singer living in a rooming house with, among others,  a prostitute as a fellow rooming house boarder. Into this mix comes Brian Roberts (Michael York), a reserved British professorial student.  Brian makes a living by teaching rich German students English, while working towards a degree.

Sally immediately tries to put the moves on Brian, but he is very standoffish about it.  Sally thinks he may be gay, and Brian for his part does not try to dissuade her from the belief.  He in fact states that he has been with a woman three times and each experience was a failure. Despite this, Sally continues to try, on occasion.  And eventually does succeed. (So, “Maybe those three women were just the wrong women.”)

Brian begins teaching a young rich Jewish girl, Natalia Landauer (Marissa Berenson), and another of his students, Fritz Wendel (Fritz Wepper) develops a crush on her. But his attempts at trying to woo her are seemingly doomed to failure, because she insists that her future husband must also be Jewish.  And therein lies the rub, because Fritz is a Christian.  Or maybe he’s not…

A new man arrives on the scene, Maximillan von Heune (Helmut Griem).  He begins to woo Sally and Brian develops a resentment against the rich playboy.  But later, after Max has moved on to other conquests, part of the truth is revealed in a conversation between Sally and Brian:

Later, when it becomes apparent that Sally is pregnant, and since she has been having relations with both Max and Brian (and possibly others) and therefore

doesn’t know who the father is, Brian gallantly offers to marry her.  Which she initially accepts.  But because the thought of being a settled down wife to a professor instead of the free-spirit life she prefers begins to bother her, she has an abortion, not telling Brian about it until afterwards.  And this causes their relationship to deteriorate.  Brian, it seems, despite loving Sally’s free-spirit attitude just can’t accept it as it is.

Throughout the film, the ever-apparent rise of the vicious Nazi party becomes omnipresent.  But most of the characters see them as harmless and ineffective, which gives some shadowing of how such a group could actually come to power.  But Cabaret is not initially meant as a window into the darker side of Germany’s history.  Rather it is a look at the more decadent pre-Nazi history.

Whatever one’s view of the lifestyle that people chose to adopt in those Weimar Republic days of Berlin (and truthfully, they aren’t quite as decadent as some other periods of history), Cabaret is a wonderful movie on so many levels.