Victorian London, steeped in a dark and romantic aura, has always been the ideal setting for murders and mysteries in films of the 1930s and 40s. Lurking beneath the white facade of stately manors inhabited by fashionable ladies and gentlemen with high morals and social sensibilities lay seedy districts reeking with crime and misery….districts where foul deeds were not uncommon. Opium addicts, prostitutes, music hall wenches, and rum-guzzling sailors were wildly cavorting with destiny on a nightly basis.

It was this contrast between wealthy society and dredging poverty that gave birth to so many tantalizing stories of horror in the “Penny Dreadful”’s of the day; stories with characters like Sweeney Todd, the Demon Barber of Fleet Street and Jack Sheppard. All of them were loosely based on news accounts these authors were reading about on a daily basis of the serial killer Jack the Ripper.

In these gentle times, even whispers of innuendo were received by ladies with a good dose of smelling salts. Nevertheless, these tales of true-life terror were repeated throughout the city and developed into short stories of legendary fame. They featured crimes that super-sleuths like Sherlock Holmes could solve on a weekly basis or settings that gentlemen thieves such as Raffles could prowl around in. Once motion pictures gained popularity, these stories were brought to life in visual splendor.

One of the earliest films to depict this atmospheric era to perfection was Dr. Jekyll and Mr. Hyde (1932) starring Frederic March, Miriam Hopkins, and Rose Hobart. Director Rouben Mamoulian‘s pre-code horror classic transported audiences to a dark and dangerous London of the late 1800s, where they were able to witness first-hand the transformation of the reserved Dr. Jekyll into the hideous Mr. Hyde.
Here are a few more well-known Victorian London thrillers brought to the silver screen:

The Mystery of Mr. X (1935) – This decisively Jack-the-Ripperish story features Robert Montgomery as our light-fingered gentleman hero who is being implicated as the killer of nine grisly London murders done by a murderer who always strikes in a different neighborhood and leaves his mark next to his victims…the signature of Mr. X! Peter Lawford starred in a color remake of this tale in MGM’s The Hour of 13 (1952).

The Adventures of Sherlock Holmes (1939) – A grisly midnight murder in a secluded city park, mysterious South American funeral dirges, suspiciously heavy footprints, missing crown jewels from the Tower of London and a puzzling drawing of an albatross add up to making this one of Sherlock Holmes’ most intriguing cases. Ida Lupino and Alan Marshall star with Basil Rathbone and Nigel Bruce in this second Sherlock Holmes feature from the 20th Century Fox studios. A visual Victorian feast for the eyes it be.

Dr. Jekyll and Mr. Hyde (1941) – MGM pulled out all the stops in this ultra-glossy gas-lit masterpiece based on Robert Louis Stevenson’s classic tale of a man’s double nature – the law-abiding Dr. Jekyll and the positively hairy sexual sadist Mr. Hyde, the creature within himself that he created whilst experimenting to scientifically suppress the evil nature residing within mankind. The all-star cast includes Spencer Tracy in the title role, Ingrid Bergman as buxom barmaid Ivy, Lana Turner, Donald Crisp and Ian Hunter. Directed by Victor Fleming.

The Lodger (1944) – Laird Crager, a great burly hulk of an actor, portrayed the very essence of a creepy social recluse in this classic where, as Slade – a quiet pathology student residing at the home of the Burtons (Sir Cedric Hardwicke and Sara Allgood) – he is suspected of being none other than Jack the Ripper. Gasp! The gorgeous moody photography of John Brahm transports us into the cobblestoned mire of Whitechapel through its heavy fog-encased settings, period detail, and its disturbing visual vignettes. George Sanders and Merle Oberon also star.

Gaslight (1944) – Charles Boyer, Ingrid Bergman and Joseph Cotten star in this intrepid MGM remake of the 1940 British classic Gaslight featuring Anton Walbrook and Diana Wynard. Twenty years after a wealthy woman was murdered in her home in Thorton Square her niece moves into the London dwelling with her husband….a suave and sinister gentleman who plots to drive his wife mad because he has a dark secret to hide. MGM attempted to destroy all available prints of the English version of this psychological thriller but fortunately a few remained and today we can enjoy both editions on DVD.

The Picture of Dorian Gray (1945) – Oscar Wilde’s fantasy about the inner state of the soul of one Dorian Gray was given A-class treatment in director Albert Lewin‘s pet project, released through MGM. Silky smooth 26-year-old Hurd Hatfield played the title character  (a role which made him very unpopular in Hollywood) along with an impressive cast including George Sanders, Donna Reed, Angela Lansbury, Peter Lawford and Sherlock Holmes veteran actor Miles Mander. Incidentally, Sherlock Holmes himself (Basil Rathbone) wanted the role of Lord Henry but was overlooked because he was already being too closely identified with the legendary detective of Baker Street. Stunning cinematography, a strong narrative, and eye-popping Technicolor sequences make this a most memorable film.

Hangover Square (1945) – Laird Cregar returned to the screen as another downright suspicious madman, this time as a pianist who had to struggle with mental turmoil – and the compulsion to wreak destruction – whenever he hears the ping! of a certain note. Eee Gads! what a way to go through life. John Brahm’s filming is atmospheric and eerie in its dreamlike sequences and the picture has a great cast including George Sanders and Linda Darnell. 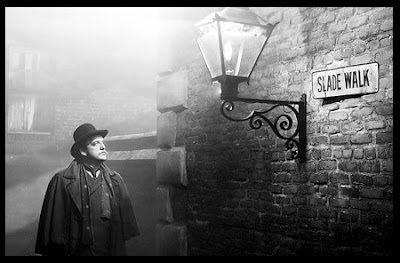 Constance Metzinger runs the website Silver Scenes, “a blog for classic film lovers.” This article is being reprinted as part of our seasonal Halloween celebrations!