Recently widowed Lucy Muir has left her London lodgings – and her in-laws – to come to White Cliff-on-the-sea with her daughter and loyal housemaid. There, situated atop a lovely coastal cliff, she finds her ideal home….Gull Cottage. It is up for rent.

“And priced at only 54 pounds per week. That’s very inexpensive for a furnished house.” 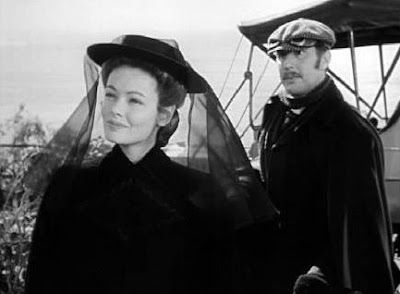 Strong-minded Lucy will not even let the thought of a ghost scare her away from Gull Cottage. The idea of returning to London and the life she led before is not a choice she wants to consider. Yea, even the gruff and determined Captain Daniel Gregg – the apparition she comes to meet there one dark and stormy night – yields to her wish to remain at his beloved home.

He had been frightening away, with his boyish pranks, all prospective tenants to Gull Cottage for the last several years and the fact that Mrs. Muir chooses to stay in spite of knowing he haunts the house wins her his admiration.

During their coming year together, a gentle love blossoms between this roguish sea captain and the spirited Victorian widow. She comes to see Captain Gregg not only as a dear friend but as an anchor and a pillar of support. Their relationship deepens when Lucy – forced to earn money for payment of the cottage – pens the captain’s memoirs, “Blood and Swash”. However, when she meets the suave author Miles Fairley (George Sanders) while at the publishing house, the Captain realizes that his “Lucia” may be wanting the love, companionship, and reality of a mortal man.

“Real happiness is worth almost any risk…. but be careful me dear, there may be breakers ahead”

Joseph Mankiewicz‘s wonderfully whimsical fantasy was released in theatres in 1947 to great commercial success. It was based on the novel, The Ghost and Mrs. Muir written two years earlier by author Josephine Leslie, who – like her character Lucy Muir – published her book under a much more masculine pseudonym…R.A. Dick.

20th Century Fox purchased the rights to the story shortly after its publication and selected Philip Dunne to rework it into a fitting screenplay for a feature film. Philip Dunne was a very talented screenwriter who had been nominated for an Academy Award in 1941 for How Green Was My Valley. He retained much of the essence of the book, and much of the plot, too – with the exception of eliminating the character of Mrs. Muir’s son. 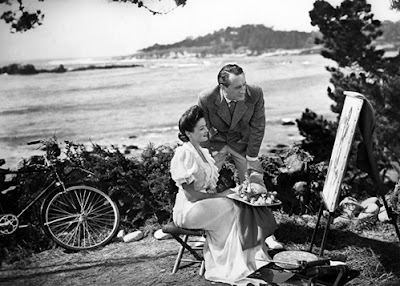 What resulted from his penwork was a sweeping romance like none other of the era. The script, the actors, Mankiewicz’s direction, the breathtaking cinematography (by Charles Lang Jr.) and Bernard Herrman’s beautifully haunting score all combined to make The Ghost and Mrs. Muir one of the most enchanting, timeless, and delightful films ever made in Hollywood.

Rex Harrison is superb as our beloved sea captain – handsome, brawny, and blazed-eyed….a man in every sense of the word. While Gene Tierney is his perfect mate: beautiful, prim and respectable. And what they both shared was the spirit of adventure in their souls.

“How you’d of loved the North Cape and the fjords and the midnight sun…to sail across the reef at Barbados where the blue waters turn to green….to the Falklands, where a southerly gale rips the whole sea white…..Oh, what we’ve missed Lucia! What we’ve both missed.” 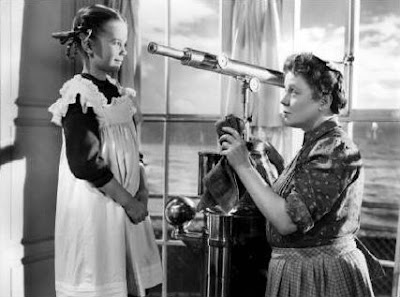 While “flesh and blood”, Captain Gregg must have been a magnificent seaman and one can imagine the loyalty he inspired in his men (and perhaps some fear, too) while aboard ship. Square shouldered, steadfast and weathered from his voyages, he was wise beyond his years, or as he described himself…“I did not lead a very wise life but it was a full one and a grown-up one. You come to age very quickly through shipwreck and disaster and at the heart of the whirlpool some men find God.”

Lucy Muir is quite an independent woman for the turn-of-the-century. Young, innocent and idealistic, she had married a man who had swept her off her feet, only to discover that he was not the romantic she had thought him to be. After his death, she wants to live a life of her own, free to make decisions without anyone warning her of society’s views on her actions. She finds her true self and her peace at Gull Cottage. And there amongst the splendor of the ocean she does not dream of her husband returning to life, but rather of a Gothic hero, a Flying-Dutchman spirit of adventure. A man who worships her as much as the fairest Lady he ever knew…the mighty Sea herself. 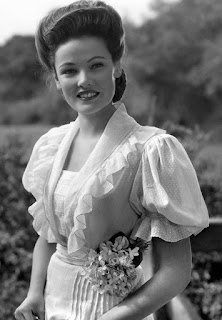 But is Captain Gregg a dream, or is he a man full of life and vigor just as much as Lucy?
Years later, when Mrs. Muir’s hair is white and the driftwood by the beach battered and worn by the crashing tide, she still reflects upon her “dream” of the captain. In spite of being a very beautiful woman, she had chosen to live her days in the seclusion of Gull Cottage. And we have the notion that men were not something Mrs. Muir ever pursued again. The ideal nature of the captain and the comradery they shared would be a hard one for any mere mortal man to compete against.Instead, all of Lucy’s real relationships are with other women….her maid being the only lasting friendship she has known. Her daughter later has her own life to lead and as such becomes as remote as the rest of the world that Lucy has turned her back against. But loneliness is something our heroine never knows, for she feels content and secure in her memories and secretly lives in hope of something as real as what she was dreaming of all those years.

In the hands of another director, The Ghost and Mrs. Muir may have been a tragic story…a story of lost love and regret and of a woman living out an empty life of isolation. But instead, under the direction of Joseph Mankiewicz, it becomes a magnificent magical romance. Gentle and warm and humorous, too. A tale of love transcending all boundaries.