Joan Crawford in a western? If that sounds incredulous, Ms.Crawford must have thought so, too, because it was not until 1954 that she starred in her first spurs-and-guns picture – Johnny Guitar. Unlike Barbara Stanwyck, Joan seemed out of place in the desert locale sporting jeans – but she gave it a good try.

Crawford stars as Vienna, a saloon/casino owner who owns a good chunk of territory in a wind-swept Arizona cattle town and wants the railroad to put in a new stop in town thereby carrying tourists to her gambling lair. Emma Small (Mercedes McCambridge) has recently brewed a potful of poison in her heart against Vienna because Vienna stole her sweetheart, the Dancin’ Kid (Scott Brady), away from her and now is dead set against her notions of securing a railroad stop.

The Dancin’ Kid isn’t the noblest citizen in town. He and his cronies (Ernest Borgnine, Ben Cooper, Royal Dano) are constantly being blamed for robbing stage-coaches. In truth, they are mining ore from a hidden silver vein. But when the vein runs dry, the Dancin’ Kid sees no harm in robbing the town bank – owned by none other than Emma Small. Emma is certain that Vienna is behind the robbery, so it is a good thing that Vienna hired her former lover, Johnny Guitar (Sterling Hayden), for protection.

Johnny Guitar grossed more than $2.5 million when it opened in theatres in January 1955, in spite of primarily negative reviews from critics. It is an unusual western from director Nicholas Ray ( They Live by Night, Rebel Without a Cause ), playing out like a western-noir with a lot of tough-talking drama. The film is slow to start with way too much pretentious dialogue taking place within the confines of Vienna’s saloon but, once the picture moves out-of-doors, the story begins to unfold and it is pure entertainment from there on.

Mercedes McCambridge gives a powerful performance of an embittered woman who is sharpening her claws readying herself for the chance to accuse Vienna of “aiding and abetting” criminals, a hanging charge. In two fantastic showdowns, they butt heads in a war of glares, scathing remarks, and guns.

McCambridge was not the first choice to play Emma Small. Crawford, who owned the film rights to the novel “Johnny Guitar” by Roy Chanslor, had wanted either Bette Davis or Barbara Stanwyck for the role but both actresses were too expensive. McCambridge adds such a bite to the character that neither Davis or Stanwyck could have given.

Actually, the entire cast is glove-fit for their roles…with the exception of Joan Crawford. It is good to see Scott Brady in a semi-villainous role. Sterling Hayden gives his usual gruff performance as Johnny Guitar. The remainder of the cast is made up of familiar western character actors: Ward Bond has a great part as big man John McIvers, Frank Ferguson plays the town marshall, and John Carradine and Rhys Williams are friends of Vienna’s. 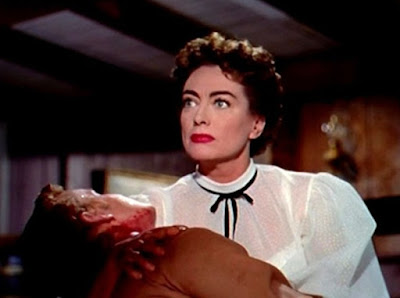 Johnny Guitar was filmed in TruColor and the color cinematography is beautiful. Costume designer Sheila O’Brien made excellent use of her fashion color palette bedecking Crawford in bright solid colors that stand out among the muted old western town surroundings. In one scene, Vienna is dressed in a gown of white that seems to symbolize her virtuous innocence among the black-clothed posse that has come to hound her.

This particular scene emphasizes what many modern reviewers consider is what Johnny Guitar is really about – a visual commentary on the House of Un-American Activities communist scare which was taking place at that time. In Hollywood, so many actors – including Sterling Hayden – were pressured into naming fellow thespians whom they believed to be communists. Vienna has no personal grievance against the Dancin’ Kid and his men but, when little Turkey, one of his gang, is captured in her house, it seems to prove her allegiance to him. The posse threatens Turkey to admit that Vienna is one of the group. Denial means death. A tough choice for the poor kid to make….as it was for those who testified against their friends during the Communist trials. 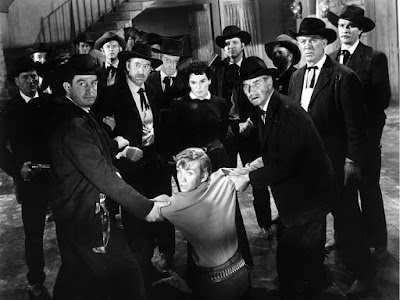 Peggy Lee gives a sultry performance of the title song near the end of the film, which, if you had felt like turning off your television mid-way through Johnny Guitar, would have made you regret it. It is one of the best western endings that I have seen in years.