In 1865, on Cauldbrae Farm, sheepherder Old Jock (Alex Mackenzie) travels to Edinburgh, since the family he works for can no longer afford to pay him. The family dog, a Skye Terrier named Bobby, has taken a liking to Old Jock, and the fiercely loyal canine follows the man for the 20-mile distance to Greyfriars Place. Old Jock, however, is an ailing man, and he succumbs to pneumonia. He’s buried in Greyfriars Kirkyard, where Bobby evades the cranky caretaker, Mr. Brown (Donald Crisp), and sleeps atop Old Jock’s grave.

Before long, Bobby has his routine down: He spends his nights in the kirkyard, and his days in the city, some of the hours spent at a diner that Old Jock frequented. The restaurant owner, Mr. Traill (Laurence Naismith), already acquainted with the terrier, feeds him each day – at Bobby’s own table. Bobby wins over everyone, from Mr. Traill to the city’s children and even Mr. Brown and his wife, who appreciate the terrier killing the rats in the kirkyard. It seems that everyone wants to claim Bobby as their own, but eventually it’s a matter of specifying ownership: the local authorities wish to identify an owner to pay an expensive licensing fee, or the stray dog will be taken away. 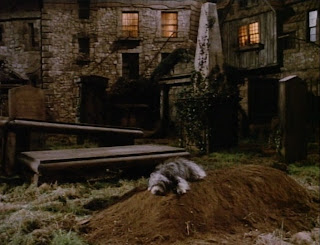 Greyfriars Bobby (1961), directed by Don Chaffey, is a Walt Disney film based on Eleanor Atkinson’s 1912 novel of the same name, from a true story about a dog in 19th-century Edinburgh who slept on his master’s grave for 14 years. Chaffey does a superb job of presenting Bobby as the film’s protagonist, keeping the camera at the dog’s level, particularly when no humans are around. Bobby is an adorable ball of fur, and there are endless shots of the dog sprinting across open land, a wonderful and delightful sight.

The movie is not as depressing as the plot might suggest. It’s an inspiring tale, not only of a dog’s loyalty and devotion, but also of the good which he instills into the people he surrounds. There’s a remarkable scene when the children, all of poor families, bring Bobby to Mr. Traill for a promised shilling. The man first feeds Bobby, and the kids are unquestionably envious that a dog is eating stew made with real chicken. Mr. Traill takes the children to the kitchen, and they have what he calls a picnic, an act which sparks a genuine relationship between the diner owner and kids. Likewise, the barely restrained animosity between Mr. Traill and Mr. Brown progressively dissipates the more time they spend with Bobby. 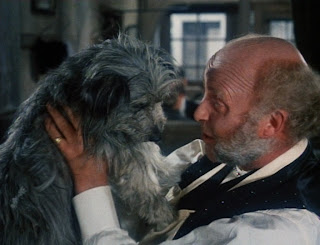 Highlights of the film: Old Jock sneaking Bobby into a lodging house in a knapsack; Mr. Brown’s never-ending allusions to the kirkyard regulation of “No Dogs Permitted” (even picking up Bobby at one point so that the wee dog, presumably, can read it for himself); Mr. Traill’s obvious unhappiness at the family taking Bobby back to the farm; and Mr. Brown’s wife coaxing her husband, who doesn’t hide his aversion for the terrier, into giving Bobby a bath.

Bobby steals the film, but the performances from the humans are solid all around. Naismith is especially good, particularly his scene in which he makes an argument in court against any person being Bobby’s owner and refuses to pay the fee out of principle. It’s also a treat to watch two patrons of the diner, both of whom make snide remarks about Bobby, being put in their place by Mr. Traill – including a veiled threat against a man who suggests striking the dog.

A kirkyard is not technically a graveyard, but a churchyard. This is why, in the movie, Old Jock’s former employer believes it “grand” that he’s buried there – it’s consecrated ground. (It’s chosen for the sheepherder because it’s the closest place for a proper burial).

Crisp started in Hollywood as an actor and became a director during the silent era. He later returned to acting full time and had a successful career, earning an Academy Award for Best Supporting Actor for How Green Was My Valley (1941). Naismith was a regular on the TV show, The Persuaders! with Roger Moore and Tony Curtis, and also had a small part in the 007 film, Diamonds Are Forever (1971).

Chaffey is perhaps best known for his fantasy films, including Jason and the Argonauts (1963, featuring Naismith as Argos, whose ship is the Argonauts’ namesake), One Million Years B.C. (1966) and Creatures the World Forgot (1971). He also directed episodes of notable TV series, such as The Prisoner (including the first episode), Danger Man (aka Secret Agent), The Avengers, Fantasy Island, Charlie’s Angels and T.J. Hooker.

Atkinson’s book also provided the basis for the 1949 film, Challenge for Lassie. Interestingly, actor Crisp appears in the film as Jock, companion to Lassie, the Bobby substitute. Another adaptation was released in 2006 as The Adventures of Greyfriars Bobby. Bobby in this movie is a West Highland White Terrier, chosen in lieu of a Skye Terrier for purely visual reasons. Christopher Lee has a small but significant role in the film.

It’s very difficult not to associate a dog’s hanging tongue with a smile. When dogs are happy, the panting commences, and tongues invariably fall out. The canine hero of Greyfriars Bobby spends much of the film’s duration flashing his doggie smile, and it seems impossible not to smile along with him. Bobby is always by Old Jock’s side, despite not being the man’s dog, because as Mr. Traill says, “a dog chooses his own master.” Is the title of the movie a reference to everyone in the city as Bobby’s owners? It’s more likely that Bobby owns the city, from the people’s hearts to a monopoly on cuteness.

Sarkoffagus is a film fan and writer at the Classic Film and TV Cafe.