In the mid-1950s Walt Disney gave ABC their very first full-hour western television program – Davy Crockett. The series was such a success that the network soon launched many other similar series such as Maverick, Wyatt Earp, and Lawman. These westerns brought ABC so much income that in 1957, when Walt Disney approached them with a fresh idea for a sitcom (sans the gun belts and tumbleweed) they turned him away. This minor detail didn’t bother Disney in the least, since he turned the material into a feature film release. The Shaggy Dog became one of the top-grossing films of 1959 earning $9,000,000 at the box-office and out-performing The Diary of Anne Frank and North by Northwest. That’s something to bark about.

What made this low-budget comedy such a smashing hit? For one thing, it was a novelty. After a decade of musicals, crime dramas, spectacles, and method-acting melodramas, here was a little film that played out like a television series, a Leave it to Beaver versus Enemy Agents. It was unique. It was fun. And above all, it was great family entertainment. Walt knew how to appeal to all ages, and The Shaggy Dog provided entertainment and humor for the young and old alike. It was filled with excitement, clever dialogue, and plenty of visual gags. (The studio went on to recycle many of these gags in their recurring films).

Unlike the box-office hits of 1959, The Shaggy Dog did not have any moments of great splendor, instead it leisurely followed the story line only to stop occasionally to wittily comment on the social status at the time or sprinkle gentle humor. Writer Bill Walsh penned the amusing screenplay based on the 1930 novel, “The Hound of Florence”, by Austrian author Felix Salten (Bambi). 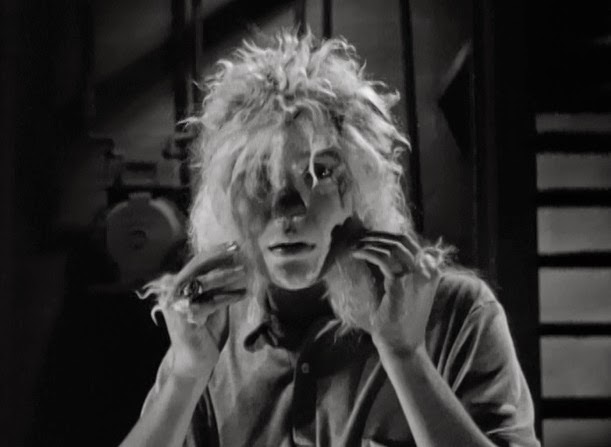 The Shaggy Dog follows the adventures of a junior scientist who accidentally recites an ancient Borgia curse that releases a 400-year-old shape-shifting spell. With the magical words, “in canis corpore transmuto” Wilby Daniels transforms himself into a big, shaggy dog – a bratislavian sheepdog to be precise, belonging to the new neighbors on the block. It is while being in the four-footed state that Wilby overhears a plot to steal a secret missile plan at the nearby air base. It’s Shaggy to the rescue then as he tries to convince his father, and the local authorities, that Continental spies are at work in the neighborhood! 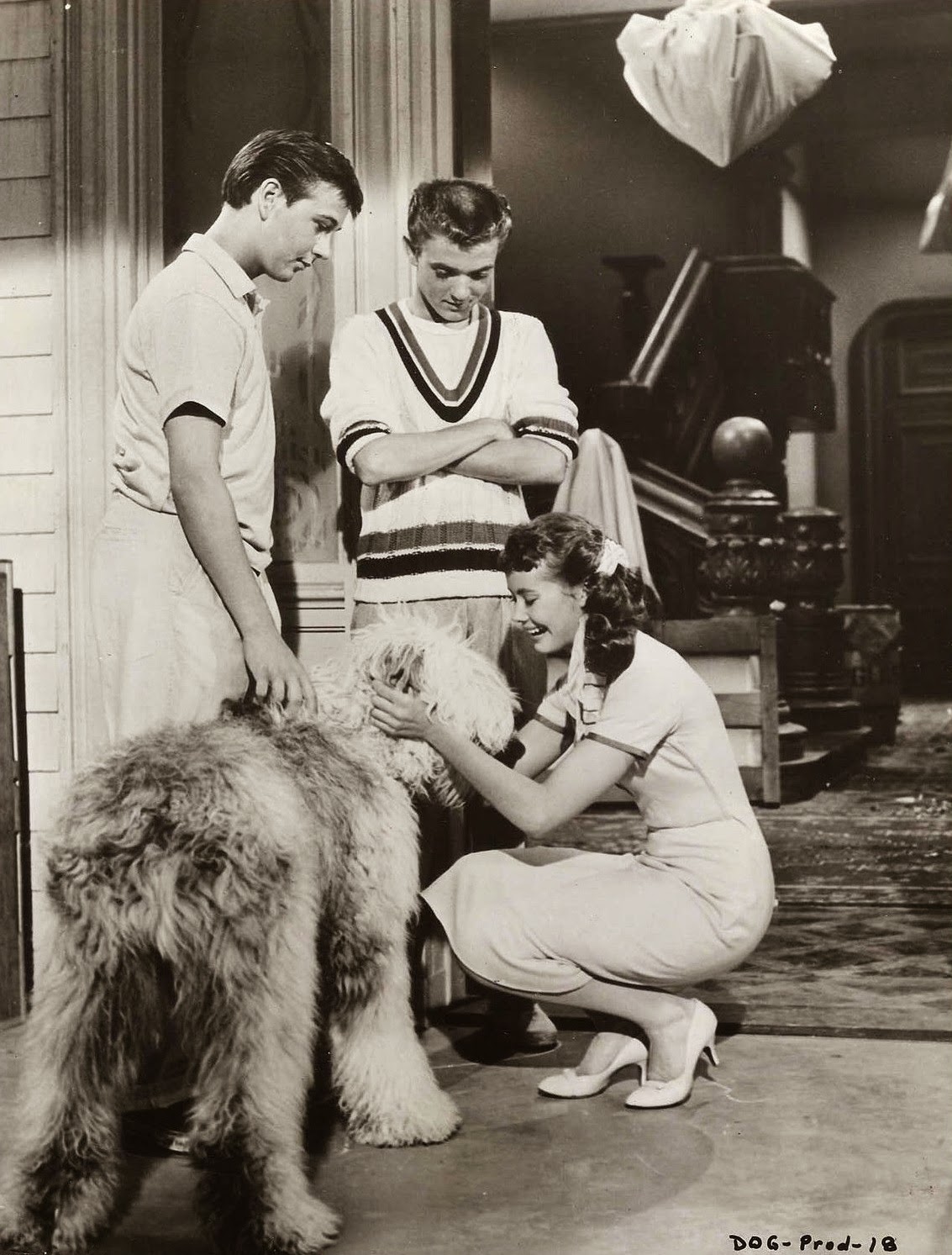 The Shaggy Dog boasted a fine cast of young players, all of whom would come to be associated with the Walt Disney Studios. Tim Considine took a radical turn from his wholesome Spin and Marty role to play Wilby’s scheming friend Buzz. At the expense of his good ol’ pal, he whizzes around in his hot-rod wooing the most eligible girls in town. One of these girls just happens to be Allison, played by Annette Funicello in a brief part…her first film appearance. She is soon replaced when Franceska Andrassy (Roberta Shore) moves in with her father in the big Victorian manor across the street. If this street looks familiar, it’s because it is the Universal cul-se-sac featured in The Munsters, The Burbs and Leave it To Beaver.

Tommy Kirk proves to be in top form as Wilby Daniels. Although he made many more films with Walt Disney during the 1960s, none of his roles would be as appealing as Wilby. Tagging along as a mischievous helpmate is his little brother Moochie, naturally played by Mickey Mouse Club “Moochie” himself – Kevin Corcoran. Moochie doesn’t display much surprise when he discovers his brother is a dog, but rather jumps at the notion of having a pet playmate to take on walks and throw sticks to. Corcoran later went on to become a producer with the Walt Disney studios in the 1970s and 1980s. 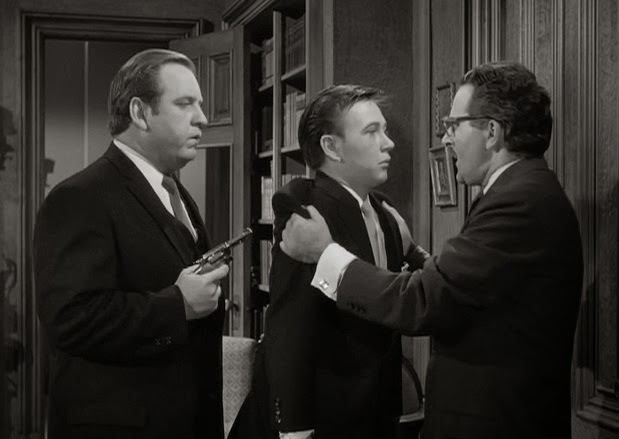 Unlike the childish, bumbling crooks seen throughout the Walt Disney productions of the 1990s, The Shaggy Dog featured some pretty normal rough-and-tough criminals (played by Anthony Scourby and Jacques Aubuchon), although in this flick they’re spies and quite debonair to look at. In fact, they’re so suave that our damsel-in-distress does not even realize they are up to no good until after they kidnap her. Our devious villains conjure up images of the sophisticated foils that were so popular in series of the 1940s, such as those seen in Sherlock Holmes, Michael Shayne, or The Three Stooges shorts. These criminals are upstanding citizens loaded with wealth which they love to lavish on their collections of fine art and furniture. No one in the community would even dare consider them to be enemies of the state.

Fred MacMurray had been making films covering every possible genre since he began his career back in 1929. After making a number of mediocre pictures during the 1950s, Disney asked Fred if he would be willing to try his hand at comedy once again. The Shaggy Dog marked the beginning of a seven-picture association he had with Walt Disney Studios. In the film, MacMurray plays a retired mailman and the father of our two leading lads. He has an allergic reaction to dogs that makes him despise the mere mention of their name and prompts him to bring out his trusty double-barreled shotgun from the hall closet.

“You know that dog thing is all in your mind”

“All in my mind?! I itch, my sinuses are bloating up, my throat is constricting so that I can hardly breath, those old Pekingese wounds on my ankle are throbbing like bongo drums…and you say it’s all in my mind!”

One of Fred’s best scenes involved him trying to convince the head of security at the missile plant that his son is a dog. Variety noted, “It’s a pleasure to see such a master of timing and emphasis as Fred MacMurray back in comedy again, even though he is somewhat limited in his material. Where he has a good line, he shows that he has few peers in this special field of comedy”.

Playing his wife is the lovely Jean Hagen, another gal who had her share of spuds before snagging this wholesome part. Cecil Kellaway, Paul Frees (a legendary voice-over actor for Walt Disney), Forrest Lewis and Gordon Jones rounded out the great cast, but let’s not forget the film’s star player – the shaggy dog. “Chiffon” was in fact Sammy’s Shadow, a talented pooch California State Division of Highways clerk. He had an illustrious pedigree and, after enrolling in William Koehler’s obedience training classes at the age of four months, he joined the Allied Movie Dogs firm and landed this wild and woolly part. Twenty sheepdogs had been tested for the part but Koehler knew he had a winner with Sammy and it is truly the dog performing all of the stunts seen in the film (except for one talking sequence where a hand puppet was used). Sammy went on to win the 1960 PATSY (Picture Animal Top Star of the Year) award for his performance in The Shaggy Dog. 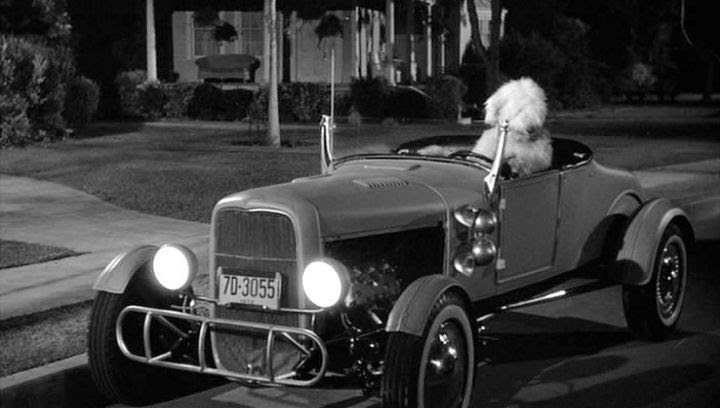 The Shaggy Dog has held up well over time, which is a testament to the enduring strength of a simple story told well. It is also notable for instigating important changes within Disney’s production outlook for the coming decades. It was the first film to use animated title sequences and the picture’s success told the studio that live-action comedy films were a profitable venture not to be overlooked. Unfortunately, they held to its “formula” so closely that many of the later Disney productions lacked novelty.

This article originally ran in 2018 and is being reprinted as part of our ongoing tenth anniversary celebrations.