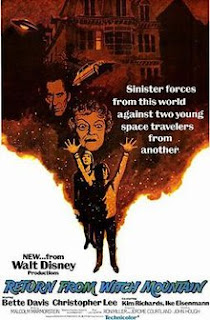 Bette Davis was one of the greatest actresses who ever lived, in my opinion. She could pull off sultry sirens, innocent ingenues and beastly characters with equal panache. One only has to watch Dark Victory, All About Eve or Whatever Happened to Baby Jane? to become convinced that she was just dynamite on screen.  Her debut performance in Bad Sister garnered her the attention that led to a career of great performances and netted her, over the years, 11 nominations and two wins for Oscars.

So why, at the end of her career, did she opt for such clunkers as these two films I’ll be focusing on today? During her heyday she had complete control over what she would do, and I doubt that she would have signed on to either of these movies at the height of her career. Both of these, however, rank in the bottom 10 of her performances on at least one site I have seen. And I agree wholeheartedly.  She deserved better, and if I had watched these two without ever having seen or heard of Bette Davis before, I might never have watched another.

This movie is actually a sequel to a previous Disney film, Escape to Witch Mountain.  (You don’t actually need to see the first one, but it might help explain a few things if you did.  I didn’t, but I read the plot summary on Wikipedia.)

At the start of the movie we see a flying saucer land in the Rose Bowl arena. (In the first movie it was revealed that our two kids were actually extraterrestrials). Off come Tony (Ike Eisenmann) and Tia (Kim Richards), along with their Uncle Bene (Denver Pyle).  Uncle Bene sends the pair off on a vacation to visit museums.  A pre-arranged taxi awaits them.  The taxi breaks down, being out of gas, and the taxi driver goes off to get gas.

Both Tony and Tia have various psychic abilities and Tony mentally sees someone falling from a height and goes off to try to save him while Tia remains behind.  Thus we have a rather typical Disney trope of two young kids separated and their attempts to reconnect with each other.

Christopher Lee as a scientist, Dr. Victor Gannon,  has developed a device that allows him to take control of the actions of an individual who has been implanted with the device.  His unwitting stooge is the nephew of Letha Wedge (Bette Davis).  Sickle, played by Anthony James (he was a significant character in In the Heat of the Night), is a somewhat dimwitted heavy in the film.  When Gannon’s device is accidentally broken while Sickle is walking along a building’s ledge, Gannon has no way to stop Sickle.  Fortunately for Sickle, Tony arrives on the scene and uses his innate ability to stop Sickle from crashing into the pavement.

Gannon, having observed this, sees power in his eyes. Letha sees dollars, but Gannon sees the potential for world domination, and the pair kidnap Tony. Meanwhile Tia, who remained behind at the cab, and who ts psychically connected to her brother, sees him in danger. She takes off looking for him.

Gannon, back at his lab, has added his mind control device to Tony and is trying to perfect a way to use him in his nefarious plans.  Tia connects up with a youth gang who help her try to find Tony. Letha, still with the bottom line of getting rich, waits until Gannon leaves on an errand and tries to use his device to get Tony help rob a museum which conveniently has a display of gold bricks (yeah, right.)

I won’t delve too much more into the plot.  It is a typical Disney-esque story.  Of course the bad guys are defeated in the end and the family is reconnected.  The story itself is not really horribly bad, especially if you like the Disney take on family entertainment.  Lee is acceptable as a Disney villain, but Davis seems to be at a loss.

I actually had to force myself to sit through this one to the end.  I admit that I’m not the biggest Disney family movie fan, but I do like quite a few of them.  But this one just left me cold.  Even without Davis I doubt I’ll give the first movie a watch. 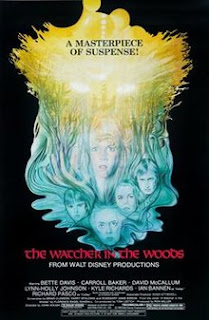 A Disney movie, just by the fact that Walt Disney’s name was attached to it, usually meant a family-friendly fun event.  Between the release of the previously reviewed  movie above and this one alone, Disney had released such all ages fun as The Cat from Outer Space, The Apple Dumpling Gang Rides Again, Unidentified Flying Oddball and, later in the same year as this movie was released, Herbie Goes Bananas and The Last Flight of Noah’s Ark.  Even 1979’s The Black Hole could have been considered family friendly (although maybe the younger set would have been lost in the technical aspect of it).

The Watcher in the Woods, however, marked a divergence from the usual family fare.  The trailers for the movie even suggested that this was NOT a movie for the folks to take the tots to see.  In addition to the voice-over which ends with “This is NOT a fairy tale”, there was an added piece that suggested that, although Disney was proud of their new movie, that parents should not bring the younger kiddos to see it.  It turns out that this is not a marketing strategy, nor is it hyperbole.  The movie is pretty scary, at least in terms of the standard Disney fare.

An American family that has a father, Paul Curtis (David McCallum), his wife, Helen (Carroll Baker) and two daughters, Jan and Ellie  (Lynn-Holly Johnson and Kyle Richards) are looking for new digs in England and are brought to a mansion owned by a Mrs. Aylwood (Bette Davis).  The mansion is being rented as Mrs. Aylwood has moved to the guest house, and the price is such a steal that the Curtises can’t resist.

Mrs. Aylwood decides she will “take a chance” on the Americans, which has a lot to do with the fact that Jan looks a lot like Aylwood’s daughter, Karen, whom, as we will see, disappeared some 30 years earlier.  The first indication there is something weird going on around the woods surrounding the mansion is when Jan looks out her window and sees a bright light, and the window cracks when she touches it.  But like any good horror movie instead of running for safety she just looks at it with a “That’s odd” look on her face.

Ellie gets a new puppy which she names Nerak.  This is presaged by Ellie, in a sort of trance, writing the name in the dew on a nearby window.  But she writes it backwards, and if viewed from the other side it is “Karen”.  The neighbors of Mrs. Aylwood, in particular Mary Fleming (Frances Cuka), are disturbed by the coincidence.

It turns out that Mary, along with Tom Colley (Richard Pasco) and John Keller (Ian Bannen) were involved in a secret initiation rite with Karen Aylwood the night she disappeared, and all three have lived with the guilt they felt that led to her disappearance.  Jan becomes convinced that the upcoming solar eclipse will be important, and becomes even further sure that she can rescue Karen, whom she is sure is still alive, but trapped somewhere.

After having watched this movie I would have thought that all of the actors were just pulled off the street and had never acted before.  No one, not even Davis, seemed to have a clue.  Davis, for her part, plays a wooden emotionless character.  And as cute as she is, I don’t think Lynn-Holly Johnson should ever have been given a chance to take off her skates and try acting.  Even McCallum, who was excellent in the TV series The Man from U.N.C.L.E. seems lost in his altogether very brief role.

Upon reflection, I think the blame for both of these movies should really lie on the shoulders of the director, John Hough.  Hough had a career in Hollywood, but most of his output was pretty unmemorable. He was responsible for one of the worst (my opinion) versions of Treasure Island, and The Howling IV (but then ALL of the sequels to the original The Howling were pretty bad, so maybe I should cut him a break there…)

This article originally ran last June, and we are reprinting it as our Flashback Friday post this week!