It took until his middle years for his professional star to peak, but this strapping, stoically handsome Southerner left a lengthy onscreen legacy dominated by a slew of the western genre’s most enduring entries. Born in Orange County, Virginia in 1898 and raised in Charlotte, George Randolph Scott knew a privileged upbringing in prestigious private schools, excelling in athletics as a teenager. He was 19 when America entered World War I and enlisted in the Army. Though he stayed in France after the Armistice to pursue an artillery officer’s commission, Scott soon returned home to enroll at Georgia Tech. He majored in textile engineering with an eye toward joining his father’s manufacturing firm.

By the late ’20s, however, the notion of acting captured his imagination; through his father’s acquaintance with Howard Hughes, Randolph journeyed to Los Angeles and made his screen debut with a bit part in the 1928 George O’Brien western Sharp Shooters.

Over the next several years, the horse-trained novice continued to rack up small roles and worked on honing his performing expertise at the Pasadena Playhouse. He’d get his first featured screen part in the now-lost ’31 indie Women Men Marry, and Scott’s stage efforts landed him a contract with Paramount the following year. It wasn’t long before the studio found Randy a successful formula, having him headline a series of 10 popular B oaters based on the prose of Zane Grey. Director Henry Hathaway cut his professional teeth on most of these 1932-33 programmers, including Heritage of the Desert, Wild Horse Mesa, The Thundering Herd, Sunset Pass, Man of the Forest, and To the Last Man.

Paramount concurrently kept Scott busy to good effect in such efforts as 1932’s Hot Saturday (where he first worked with lifelong pal Cary Grant), the horror outing Murders in the Zoo (1933), and the psychic suspenser Supernatural (1933), starring Carole Lombard. After the Grey westerns ran their course, the actor was a popular loan-out for RKO, where he appeared in the 1935 version of She, with Helen Gahagan co-starring as “She-Who-Must-Be-Obeyed,” and played second male leads in two Astaire/Rogers musicals: Roberta (1935) and Follow the Fleet (1936) . One of Randy’s most popular films remains 1936’s The Last of the Mohicans, based on the James Fenimore Cooper saga and featuring him as 1700s frontier scout Hawkeye.

Scott went freelance after his Paramount deal expired in ’38, and the next few years would find him in musicals (1937’s High, Wide and Handsome with Irene Dunne), comedies (1940’s My Favorite Wife alongside Dunne and Grant), and as a father figure in two Shirley Temple vehicles, Rebecca of Sunnybrook Farm (1938) and Susannah of the Mounties (1939).

Westerns, however, still dominated his workload. He’d saddle up through the pre-WWII era for such notable pictures as Jesse James (1939) with Tyrone Power and Henry Fonda; as lawman Wyatt Earp in another ’39 oater, Frontier Marshal (which would be filmed eight years later as My Darling Clementine); in 1940’s Virginia City, a first-rate Civil War-era actioner co-starring Errol Flynn; and opposite outlaw queen Gene Tierney in Belle Starr (1941). The list of “A” westerns continued with When the Daltons Rode (1940), also starring Kay Francis and Broderick Crawford; the 1942 Fox Technicolor extravaganza Western Union; as John Wayne’s nemesis in 1942’s The Spoilers and in Belle of the Yukon (1944), where he played opposite dance hall girls Dinah Shore and Gypsy Rose Lee.

The war years found Scott doing his share of combat flicks. He was a Marine Corps drill sergeant in To the Shores of Tripoli (1942), co-starring John Payne and Maureen O’Hara, while he took to the skies with the Army Air Corps in 1943’s Bombardier, with Robert Ryan and Pat O’Brien;  and in 1943, he appeared in Columbia Pictures’ first color production, The Desperadoes with Glenn Ford. It was back with the jarheads in the blood-and-guts Gung Ho! (1943), followed by a non-military turn as a selfless doctor working in war-ravaged Asia in 1945’s China Sky.

After his 1946 role in Abilene Town, which characterized him as the iconic frontier hero who stood alone trying to clean up a lawless community, it became clear to Scott that western fare would be his destiny. And except for a few turns from this period– among them the 1945 buccaneer tale Captain Kidd with Charles Laughton,  the comedy/mystery Home, Sweet Homicide (1946) with Lynn Bari, and the sentimental Christmas Eve (1947), as Ann Harding’s son–he stuck to his (six) guns. Key sagebrushers on his late ’40s resumé include Badman’s Territory (1946), Trail Street (1947), and Albuquerque and Return of the Bad Men (both 1948). Years later, Scott reminisced about his decision to appear exclusively in western films and said, “They have been the mainstay of the industry ever since its beginning. And they have been good to me. Westerns are a type of picture which everybody can see and enjoy. Westerns always make money. And they always increase a star’s fan following.”

With the onset of the ’50s, Scott remained among the country’s top box-office draws. The years’ weathering only served to lend an effective world-weariness to his screen persona, and allowed him to segue seamlessly into the “adult western” era. He continued to make profitable saddlebusters for Warner and Columbia through the mid-’50s, as evidenced by Colt .45 (1950), Santa Fe and Man in the Saddle (both 1951), 1952’s Carson City and Hangman’s Knot, and Man Behind the Gun, The Stranger Wore a Gun and Thunder Over the Plains (all 1953).

Randolph Scott in Decision at Sundown (1957)

The remainder of the decade saw the actor enter his collaboration with director Budd Boetticher, which resulted in some of the most distinctive and acclaimed projects in Randy’s career: Seven Men from Now (1956) with Gail Russell and Lee Marvin; The Tall T (1957) with Maureen O’Sullivan and Richard Boone; Decision at Sundown (1957); Buchanan Rides Alone (1958); opposite Virginia Mayo in Westbound (1959); Ride Lonesome (1959); and Comanche Station (1960).

Scott thereafter received a fitting cinematic farewell alongside fellow iconic screen cowpoke Joel McCrea in Sam Peckinpah’s 1962 fading-of-the-Old-West elegy Ride the High Country. Always a shrewd investor, the independently wealthy Scott had neither the inclination or need to ever return to performing, and he led a quiet retirement until his passing in 1987.

Scott always protected his privacy and once said, “Frankly, I don’t like publicity. I always remember something that (theatrical producer and impresario) David Belasco said and had incorporated into the contracts of his stars. His theory was, ‘Never let yourself be seen in public unless they pay for it’.” 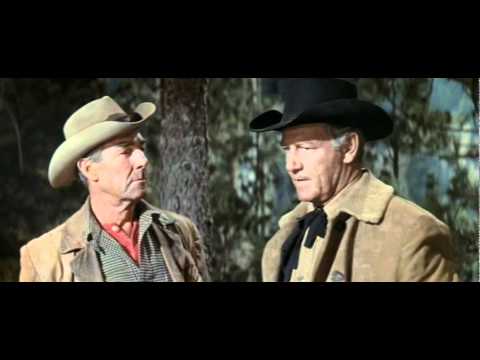