In this guest blog, writer Joel Gunz presents a pictorial examination of how the art of Salvador Dalí influenced and impacted the works of Alfred Hitchcock. (Whom Gunz lovingly refers to as “Hitch”).

Take a look at the two pictures below. If Hitch didn’t consciously borrow from Dalí’s painting when he came up with the scene in Mother’s bedroom in Psycho, I’ll eat Magritte’s hat.

The bed with its outline of feminine curves, the water and the bright red gem on a pedestal are all sexual symbols. Undercutting that eroticism, however, is a swarm of ants clotted where the invisible woman’s sexual parts would be. (They’re hard to see in this picture.) In Dalí’s skewed, alternate universe, those bugs represent death and decay. Sadly, his wife, Gala, had recently undergone surgery which rendered her infertile.

For now, let’s focus on this painting’s quality of desire and repulsion, femininity and rot. These are notions that had been on Hitch and Dalí’s mind for years. Dalí referred to this as the “phenomenology of repugnance.” Yes, it’s a mouthful and if you say it out loud, you’ll sound like a Harley-Davidson with a fouled spark plug. Try it! Still, it’s a key to understanding the painting, along with Psycho.

“Repugnance would be a symbolic defense against the intoxication of the death drive. One experiences repugnance and disgust for what one wishes to get closer to, and from this comes the irresistible ‘morbid’ attraction, conveyed often by incomprehensible curiosity, of what appears to us to be repugnant.”

In other words, Dalí explained why we slow down to rubberneck at the scene of an accident.

He had been reading Freud’s The Pleasure Principle and was at least aware of Arthur Schopenhauer (The World as Will and Representation) and Hungarian philosopher Aurel Kolnai, who wrote in Der Ekel (Disgust) in 1929 that “our psychic ambivalence regarding death lies behind most reactions of disgust.”

The point is this: as artistic contemporaries, Dalí and Hitchcock drank deep from the same philosophical well.

(Preter-)naturally, that brings us to Psycho. As you might have caught in my post on Hopper’s influence on Psycho a couple of weeks ago, when making that movie, Hitch had much more on his mind than how he was going to secretly replace Marion’s blood with chocolate syrup. One of its themes is the notion of attraction/repulsion, disgust/fascination.

When Lila Crane (Vera Miles) is drawn to the Bates mansion seeking her lost sister, she is pulled forward by both her curiosity and her fear. The audience, likewise, wants her both to flee that murder site and proceed into the house. 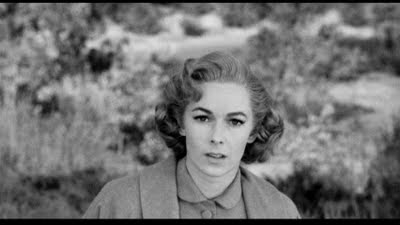 Lila goes straight upstairs to Mother’s bedroom, where she encounters a room many audience members in 1960 would have seen in the film’s trailer. It’s a scene loaded with more red herrings than a communist Bar Mitzvah. (Ba dum bump.) 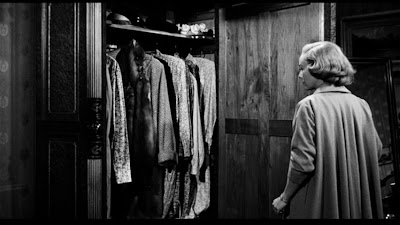 Though we half expect a skeleton to fall out of the wardrobe, there’s nothing in there but a rack of out-of-fashion clothes. Notice the asexually modest long sleeves — all the better to hide mother’s withered arms. 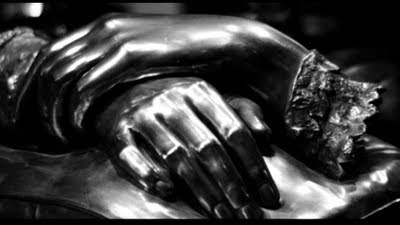 Hitch zooms in on this lifeless statuette of hands on a Bible. Creepy, perhaps, but harmless. 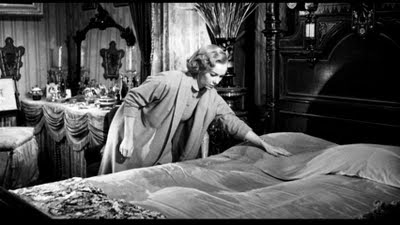 As if to make sure it’s real, Lila touches the impression of Mother’s body on the bed.

Lila’s tour of Mother’s room confirms one thing: this room is occupied by a very real, though absent, person — and it is very much in the spirit of Dalí’s Surrealist composition above. Of course, the irony is that Mother has been dead for quite some time. In that way, this room is even more Dalí-esque, for on that bed is a fresh imprint of someone long gone. That understanding, however, is available only to audiences who are seeing the movie for the second time and know how it ends. That is, on first viewing they will think it’s Mother’s body print; on second viewing, they know it can only be her corpse (or, perhaps, Norman’s body print, which would hint at incest or necrophilia). I believe that Hitch planted these clues just for those repeat viewings. Regardless, Psycho is even creepier upon second viewing.

Of course, Lila’s “incomprehensible curiosity” doesn’t end there. Eventually, it leads her to the fruit cellar — a storehouse of slowly decomposing vegetation — to finally come face-to-face with the desiccated flesh of death itself. 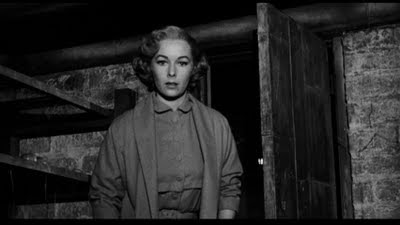 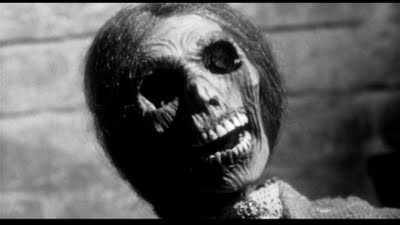 So, next time you see a horror movie and your friends yell at the heroine not to go down to the basement, simply tell them that her behavior is quite normal. Tell them that she’s simply acting on Dalí’s principal of the phenomenology of repugnance. Who knows? Maybe it’ll get you laid. Or not.

For more details about Hitch’s connection to surrealism, take a look at my post from May 24, 2007 — updated with new pictures!

As creator of the award-winning blog, alfredhitchcockgeek.com, Joel Gunz has been invited to speak at conferences and other cultural events and was a regularly featured speaker at Alfred Hitchcock’s The 39 Steps on Broadway. He is currently seeking an agent and publisher for his book, Notes from and Alfred Hitchcock Geek. His Facebook page is: http://www.facebook.com/alfredhitchcockgeek.