“There is a creature alive today that has survived millions of years of evolution. Without change, without passion, and without logic. It lives to kill. A mindless eating machine, it will attack and devour anything. It is as if God… created the devil… and gave him… Jaws.” – Narration from the original 1975 trailer.

Where does an obsessive fan of Jaws even start? How does one trace the threads of its power to captivate, to enthrall, to terrify? What does one make of its entwining itself throughout a life, and especially the nightmares, the nightmares of monstrous, maniacally grinning sharks that look like nothing ever seen on earth? One starts at the beginning, one supposes.

Being exposed to it from the age of four is probably the main fact of it. Growing up in the 1970s, you couldn’t escape the Jaws phenomenon, even if your folks wouldn’t let you see it until you were older. So you spent a lot of time being accosted by this monstrous shark image and wondering if, when you finally saw the movie, you’d die of fright. And by you I mean me, of course. The week before I saw it on re-release in 1978 or ’79 (at a drive-in, no less!), I laid awake in bed each night, literally fearful for my life.

One of my earliest memories is of my parents picking my sister and me up from our aunt’s house, who’d babysat us while they went to see the movie. From the darkened backseat of the car I asked, “How’d they kill the shark?” My mom replied, “Three men went out on a boat and blew it up.” In my tiny head I had an image of three men in a wooden fishing boat throwing a stick of dynamite into the ocean while a rather large nondescript fish swam beneath them. 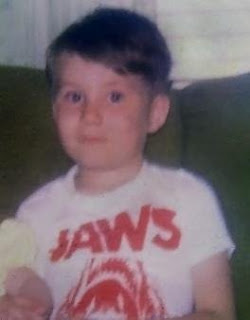 Also a kid I spent a lot of summers down at the Jersey Shore so there was plenty of time to ruminate upon just what lurked beneath the waters. Daytime was bad enough, of course, but night was worse. Hearing the endless roar of waves and looking out over a blackened sea and imagining what was beneath – imaging myself out in those waters, helpless and alone, truly vulnerable, as swells lifted and dropped me, pushing me further and further from shore – was almost too much for my imagination.

I’d lean over the boardwalk railings and give myself a frisson of delicious terror, like someone who craves the burn of whiskey or habaneros on their palate. Then my parents would call me to catch up and off I’d run, glad to be free of the fear that I know haunts people everywhere; even, I’m sure, in landlocked places. I even remember being afraid of swimming across a pool at night, when I was older, and giving myself that same tease of terror… and then getting out, drying off, going inside. 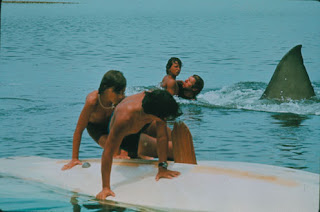 The estuary sequence as originally shot

But Jaws is more than just cheap thrills, and while I always watched it over and over whenever it was on TV, it’s been in the last three or four years that the obsession has fully bloomed. Once I had the DVD it was on almost nightly. Now that I’m an experienced film fan, with a film degree and all that entails (basically writing about films for free online), watching Jaws is a different experience; the pleasures are not simply in the terror the movie engenders, but in how that tale is told. It is common film lore that the shark didn’t work so the filmmakers couldn’t use it as much as envisioned, etc., etc. 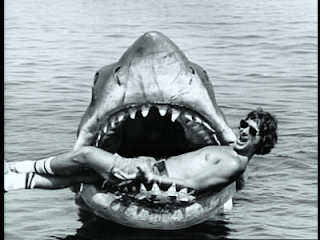 Today I see how perfectly the film is constructed, how effortlessly it presents character and dramatic conflict, how it takes its time getting to the “good stuff.” Like all great ’70s movies there is overlapping dialogue, faces that bear the traces of lives lived and not makeup artists employed, and space, so much space for which the characters to move in and around, a real sense of place… until we get to sea, of course, and all avenues are closed off. It’s man versus nature and man versus man and man versus himself. Brody, Quint, and Hooper each have their own reasons for confronting this beast. Scheider, Shaw, and Dreyfuss are one of the great cinematic ensemble casts. Watch each actor closely next time you see the film; you’ll be amazed at the little things they do to solidify their characters. 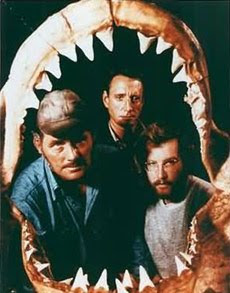 Do I think that Jaws is the best movie ever? Honestly, in many ways, yes, I do. It is surely the finest thriller Hollywood has made; in its perfect cocktail of character and carnage it is still a beacon to filmmakers today. While other favorite movies of mine may aspire to a higher, more rarified art, I am also of the opinion that art and generic conventions need never be separated and yield some of the finest films ever made. The Godfather could have been a cheap gangster flick; The Silence of the Lambs a potboiler about a mad doctor; Raging Bull just another sports triumph movie. But they’re not, and neither is Jaws simply another monster-on-the-loose story. 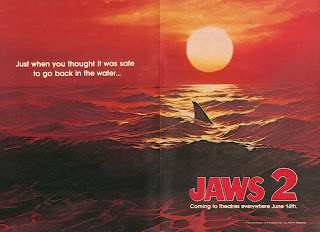 I’m surprised when I talk with people who think so. Once in a video store I overheard a young woman whining to her boyfriend, “Why is Jaws in the horror section?” Took all my strength to not grab her, thrash her about, and shout in her face, “Because when a shark EATS YOU it’s considered SCARY.” 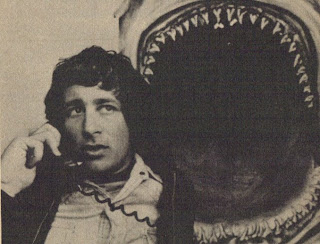 “Hello, Universal? Look, I know I’m only 26 years old, but I’m gonna make you the first movie to ever gross $100 million ever. What? You want me to shoot it in a tank? FUCK YOU.”

Jaws could have been what all of its countless imitators are: cheap and fast, Roger Corman-style exploitation flicks with all of the blood but no heart to give it a beat. We’ve all seen those movies. Steven Spielberg‘s  (and, of course, Scheider’s and Dreyfuss’s and Shaw’s and Verna Fields’s and John Williams’s) Jaws, even with it gore-flecked teeth and gaping maw and insatiate hunger, with the irrational fear it has given people all over the world, is heart, all heart, and probably even my own.

Cheers, and thanks for reading. 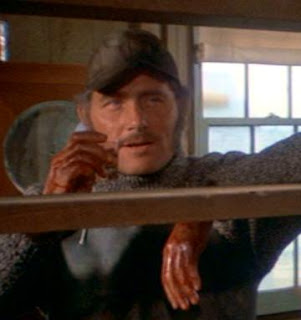 “Here’s to swimmin’ with bow-legged women.”
The second most famous toast in film.

Will Errickson, born in NJ and now living in NC, discovered JAWS and a love of movies and monsters at an early age. The love of blogging and bourbon, however, came much later. You can read more of his writing at Panic on the 4th of July.