As some of you already know, underrated classics are what I love to write about most. There are hundreds of little-known treasures that deserve to be shared, one of which is The Black Orchid.

The Black Orchid stars Sophia Loren and Anthony Quinn as a middle-aged widow and widower who fall in love and want to get married. The first half of the film follows happy-go-lucky Frank (Quinn) as he attempts to woo “the Black Orchid” Mrs.Rose Bianco (Loren). Some people in their Brooklyn neighborhood label her “no good” because she drove her first husband into a life of crime, an activity that eventually led him to be fished out of a river dead. Her neighbor Mrs.Gallo (Naomi Stevens) knows this isn’t true and she encourages Rose to pay more attention to Frank.

When he finally wins her affection, they encounter two roadblocks to the alter: Rose’s son Ralphie (Jimmy Baird) who is spending time at a state work farm/juvenile center and Frank’s daughter Mary (Ina Balin, making her film debut ). Mary is about to wed her sweetheart Noble (Peter Richman) and move away into a house of her own but when she discovers that her father plans to wed, jealousy and bitterness consume her. Ralphie likes the idea of Rose remarrying but when he hears the wedding plans may be canceled, he runs away.

Like most Hollywood films, The Black Orchid has a happy ending and if tears flow easily for you, you will probably need a handkerchief or two to dab your eyes when you see the sweet reconciliation between everyone.

The Black Orchid was released by Paramount Pictures in 1958 and over the years has gotten some poor reviews for a very simple reason – the film is often classified as a comedy when it isn’t. It is a drama. It has some humorous moments but it is far from being comedic. If you know you are about to watch a drama rich with emotion then The Black Orchid won’t disappoint. 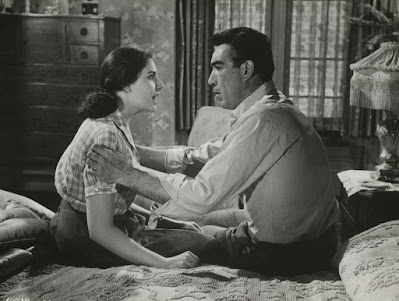 The film was beautifully shot in black-and-white by Robert Burks (Vertigo, North by Northwest) who is best known as being Alfred Hitchcock‘s favorite cinematographer. It also features a good score by Alessando Cicognini and costumes by Edith Head, but what makes it stand out is its script. This was Joseph Stefano‘s first script. He would later become famous for penning the screenplay to Psycho (1960). Stefano created characters with depth and even though his dialogue is commonplace, it is the natural-sounding tone of the lines that make this story seem so believable. Frank’s first wife was mentally ill and so when Mary begins showing signs of bitterness, a dark underlayer begins showing through the story turning the romance into a psychological drama.

Anthony Quinn and Sophia Loren give excellent portrayals of two tough Brooklyners from “the old country.”Such a beautiful romance blossoms between them that it is painful to see how close their children came to breaking it up. Ina Balin gives an especially good performance as Mary, displaying her sweet gentle side in one moment and jealously and stubbornness in the next.

Also in the cast is Virginia Vincent as Mary’s friend Alma, Whit Bissell as the sympathetic director of the juvenile center, Joe Di Reda, and Frank Puglia.