Dennis Morgan and Jack Carson were great pals off-screen and they had the good fortune to play together on-screen in 11 films released throughout the 1940s. Most of these were simple comedies in the vein of the popular Bob Hope and Bing Crosby Road pictures that Paramount was issuing. In 1946, Morgan and Carson made a film called Two Guys from Milwaukee which turned out to be a hit for the fellows and so, two years later, they banked on its success and came back with Two Guys from Texas, even though none of the characters are the same. 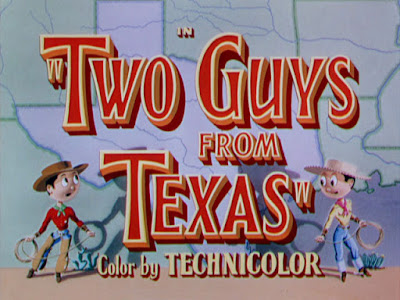 In this fun outing, they play Steve Carroll and Danny Foster, two song and dance men. Their act bombed in the East so they are heading West to try their luck in California. Their car breaks down in the Texan desert en route and they take refuge at a dude ranch run by Joan Winston (Dorothy Malone) who, in exchange for room and board, employs them to entertain her guests. This they willingly do and they also bring a little romance to the ranch with Steve falling for Joan and Danny being pursued by Maggie (Penny Edwards).

Two Guys from Texas is rather slim on plot but packed with entertainment. Morgan and Carson were a great duo and their characters were known for constantly ribbing each other. They had some excellent banter in It’s A Great Feeling (their last pairing) and they have some funny quips in Two Guys as well.

There is a good running subplot about Danny’s (Jack Carson  terrible fear of animals — even a squirrel sends him into a fit — and another about a bank robbery in town which the boys are accused of. The grand finale takes place at the annual rodeo where Danny and Steve attempt to capture the real crooks in order to clear their names and win back their gals. This finale was later used again in Here Come the Nelsons (1952) with Ozzie Nelson riding a wild bronco while his boys set out to foil bank robbers at the rodeo. 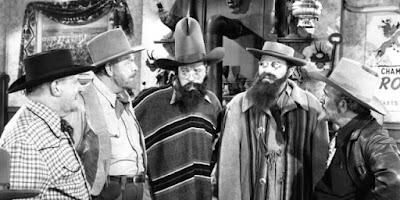 Two Guys from Texas was filmed in vibrant Technicolor and was directed by David Butler who always did fine work. It features some great musical numbers penned by Jule Styne and Sammy Cahn (notably “Everyday I Love You Just a Little Bit More” and “I Want to be a Cowboy in the Movies”) and it also boasts a great supporting cast of characters including Fred Clark, Forrest Tucker as an inept Texan sheriff, Monte Blue, John Alvin, Gerard Mohr and even an appearance by Bugs Bunny!

If you are looking for light-hearted good-natured fluff for entertainment, what more can you ask for?