On the coast of Madagascar lies a pirate’s hideaway – Diego Suarez – a fortress for thieves. A narrow harbor is the only entrance to the city and this is heavily defended by cannons. The British Royal Navy wants to destroy this base and capture every pirate on it, but they cannot find a way to enter the harbor without damaging their fleet. Lieutenant Brian Hawke (Errol Flynn) has a plan: he poses as a deserter and hopes to gain entrance to the base by joining their band and gaining the trust of the pirates. Captain Roc Brasiliano (Anthony Quinn) is suspicious of this new recruit but “Spitfire” Stevens (Maureen O’Hara), another pirate leader, approves of him. She dislikes men in general but this handsome rogue intrigues her. She gives him the use of one of her ships and even agrees to marry him (who wouldn’t!), but Hawke’s plan backfires when he is discovered by Captain Roc signaling to the British fleet and is captured. As the British warships are just about to enter the bay, Hawke must find a way to free himself and save the fleet from destruction.

Against All Flags is a grand little pirate flick. The story, by Aeneas MacKenzie and Joseph Hoffman, is easy to follow and packed with action and a dash of humor. George Sherman’s direction is taut and the settings are colorful, looking gorgeous in Technicolor. The film also boasts a strong supporting cast that includes Mildred Natwick, Harry Cording, Phil Tully, and Lester Matthews. Robert Warwick has a great part as the infamous pirate Captain Kidd. However, it is the three leading stars that make this film special. 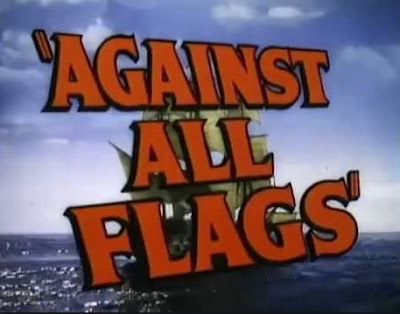 Against All Flags was made seventeen years after Errol Flynn became famous as a swashbuckling hero in Captain Blood (1935). He wasn’t as youthful but he certainly was just as dashing. Douglas Fairbanks Jr. was originally slated to star in the film but when Universal Pictures purchased the rights to the script they managed to snag Errol Flynn for the lead instead. This turned out to be Flynn’s last Hollywood swashbuckler.

Anthony Quinn signed on early to play the villain. He was probably delighted to find out that Maureen O’Hara was going to star in it as well. This was the fourth time these two cronies would be united – and the third pirate-themed film they would make together. Quinn is wonderful as the jealous Captain Roc. He wanted to make Spitfire Stevens his woman but could never arouse romantic feelings from her, hence he becomes doubly jealous when the handsome Lt. Hawke not only earns her admiration but her love as well.

Maureen O’Hara was initially hesitant to star opposite Errol Flynn after he made an amorous advance towards her years earlier, but “he had won me over. I respected him professionally and was quite fond of him personally. Father Time was slowly calming his wicked, wicked ways, and deep within that devilish rogue, I found a kind and fragile soul.”*

Her character is aptly named Spitfire Stevens because she has a fiery temper and a jealous streak, too. O’Hara always had a knack for playing women who were very strong and independent and yet still feminine with not a trace of tomboyism. She looks particularly dazzling in this film. 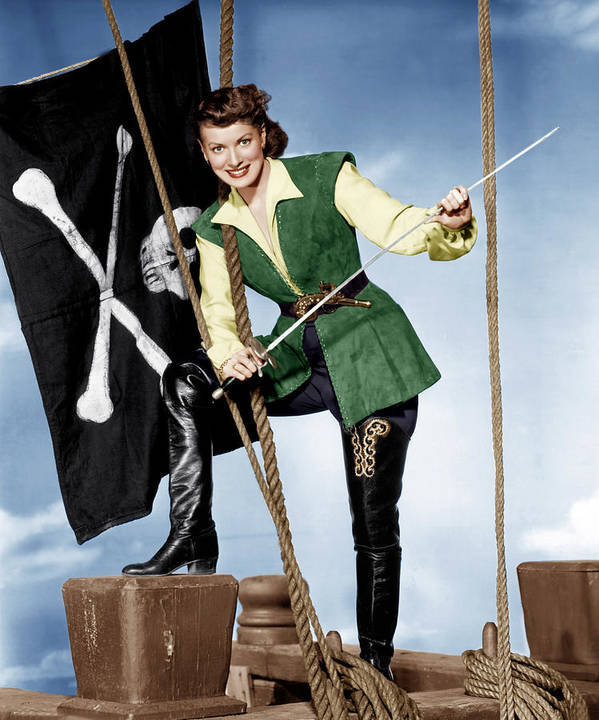 Against All Flags premiered on Christmas Eve in New York and was a great success at the box office. Variety wrote that it “takes a tongue-in-cheek attitude towards the plotting at times without minimizing the story’s chief concerns with swashbuckling movement.” The plotline really took a comedic turn when it was later remade as The King’s Pirate in 1967 (starring Doug McClure and Jill St. John).

Constance Metzinger runs the website Silver Scenes, “a blog for classic film lovers.” This post originally ran last year and is being reprinted as this week’s Throwback Thursday article.