Eugene Loring was never a household name and yet his unique style of dance was recognizable in many musicals of the 1940s and 1950s. His best-known works are Silk Stockings (1955) and Funny Face (1957), but it was through the peppy “La Bamba” number in Fiesta (1947) that first made me take notice of him. Loring blended jazz with ballet and contemporary dance to create innovative moments that were exciting to watch onscreen.

Eugene Loring, born in 1911 in Milwaukee, fell in love with music and dance at a young age. His father ran a saloon and dance hall and Loring would always join in for the Friday night dances. He was also a self-taught pianist. One day, he saw Uday Shankar, a talented Indian dancer, perform and Eugene knew that he wanted to become a professional dancer.

He went to New York City to study with George Balanchine at the School of American Ballet in 1934, beginning at the ripe old age of 24. Loring had a powerful physique and chiseled facial features that made him look like an ancient Grecian dancer. He joined with Michel Fokine’s dance troupe only two months later and quickly moved from being a character dancer to a soloist in his productions. By 1936, Loring was already creating his own ballets for the Ballet Caravan, a touring company specializing in an all-American repertoire. These ballets included Harlequin for President (1936), Yankee Clipper (1937), and Billy the Kid (1938), which featured a score by Aaron Copland and is still often performed today.

Based on his work in these productions, he was offered a lucrative six-month MGM contract in 1943. But, in typical Hollywood fashion, the studio did not know what to do with Loring after they signed him and so his first work in film was actually an acting job as jockey Taski in National Velvet (1944). It was not until 1945 that Loring was tasked with choreography work, helping to create some of the dances in Ziegfeld Follies. It was during the making of this film that he met Fred Astaire, whom he would work together with on four films, including his next production Yolanda and the Thief, which gave Loring his first onscreen credit as choreographer.

Loring staged a number of interesting dances for productions throughout the 1940s including The Thrill of Brazil (1946), Fiesta ( 1947 ) which showcased Ricardo Montalban’s fine dancing ability; Abbott and Costello‘s Mexican Hayride ( 1948 ) and even The Inspector General (1949). Most of these films featured only a few dance numbers and so Loring had plenty of time to continue his work in ballet, his true love. He choreographed the marvelous “Carmen Jones” on Broadway and in 1948 founded the American School of Dance in Hollywood.

Loring felt strongly about how American dancers ought to be trained. He always believed that dance was dance and no dancer should learn simply one style but instead embrace a wide variety of forms and movement. “Americans are a composite lot and American dancers must be as many-faceted as the melting pot” Loring said in an interview conducted for Dance Magazine in 1956. The American School of Dance was open to anyone interested in dance and featured all forms – tap, ballet, jazz, modern dance – blended in a unique well-rounded curriculum.

In the early 1950s, Loring worked on several MGM productions that featured Mario Lanza  including the fun “Tina-Lina” from The Toast of New Orleans ( 1950 ), and “One Alone” and “It” from Deep in My Heart (1954) that beautifully showcased Cyd Charisse’s ballet ability and Ann Miller’s fantastic tapping skills.

But Loring is best known for his work with Fred Astaire in two MGM musical classics – Funny Face (1957), which gave Audrey Hepburn a chance to jazz to an eclectic beat in “Bohemian Dance”, and Silk Stockings (1957) which again featured the lovely Cyd Charisse in the exciting “The Red Blues” and “All of You” dance numbers.

Eugene then took time off from Hollywood productions and, aside from a few television productions (including Cinderella in 1965), he focused his attention on teaching. He founded the dance department at the University of California at Irvine where he taught up until his death in the early 1980s. 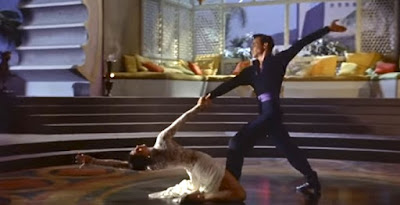 Eugene Loring may be one of the lesser-known choreographers, but during his lifetime he created a fine body of work. He invented marvelous dance numbers for all of the films he worked on and left “Billy the Kid” as his legacy to the world of dance, the man deserves more recognition for his contribution to film choreography than he has received.