In this guest post, Constance Metzinger remembers the 1956 British film Now and Forever.

“You can’t separate us! We love each other!”

Lonely upper-class English schoolgirl Janette Grant (Janette Scott) falls in love with handsome Mike Pritchard (Vernon Gray), a poor mechanic from the local village. Janette’s mother believes the courtship to be unsuitable and puts a stop to it by threatening to send her daughter to Canada. “Canada??!” the poor girl declares. And so, the two young lovers decide to defy their parents and attempt to elope to Scotland.
Playwright R.F Delderfield clearly took inspiration from Shakespeare’s Romeo and Juliet when he wrote The Orchard Walls, the play which Now and Forever was based on. In place of the feuding families he focused the conflict on social class differences and an unfeeling mother (excellently played by Pamela Brown). It’s an engaging story and you cannot help being sympathetic to the youngsters in their plight, especially that of poor Janette.
Janette’s parents were divorced when she was younger and so she lives at home with her mother, who coldly informs her one day that her father passed away in Ireland. This news, coupled with a lack of friends and her impending separation from Mike, leads her to attempt suicide by jumping from the bell tower at her school. Mike and Janette were willing to wait until they were older to marry but the threat of being separated now forces them to consider eloping as their only alternative. 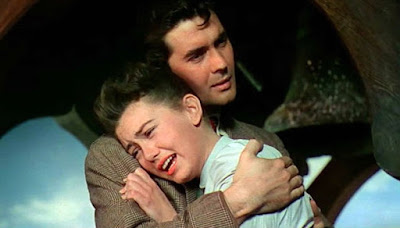 Michael Pertwee helped to write the screenplay which, although engaging, is rather incredulous at moments. Back in 1950s England, gossip yielded a powerful hand, especially in small villages, but would two eloping teenagers warrant front page news across England? By the end of the film, it seems as though the entire country’s police force and its citizens have the dragnet set for their entrapment.
Director Michael Zampi, who was best known for making comedies (Too Many Crooks, Tonight’s the Night, Laughter in Paradise) shows that he was equally adept at handling drama. The Technicolor filming of Now and Forever is beautiful, as are the lovely scenes of the English countryside as Janette and Mike go scouring about in his hand-built roadster. The cast is top-notch, too. Janette Scott, a popular British child actress, was given the chance to display how well she could handle a more mature role and show her audience how much she was growing up. Vernon Gray, who resembles a young Tyrone Power, makes an admirable lover. Kay Walsh is also featured as Miss Muir, the headmistress at Janette’s school. This role could have been expanded on because Kay’s talent is wasted otherwise. Jack Warner plays Mike’s father, and then there are small parts going to a number of great character actors such as Ronald Squire, Guy Middleton, Bryan Forbes, and Hattie Jacques. 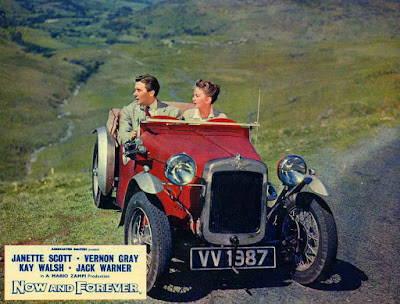 Now and Forever was clearly aimed towards a teenage audience with its heroes being two young defiant lovers. They set off on a romantic escapade to Scotland to elope and live happily ever after with only true love and nary a coin in their pockets to support them, but will a marriage such as theirs last? There is a disturbing air hovering over Janette’s affection for Mike. It is as though the loss of her father made her realize that she had no one in the world to love and there was no one left in the world to love her. Miss Muir didn’t have the courage to give her the maternal love she needed and after she meets Mike she pours all of the love that she stored up onto him. But this makes her seem possessive and all the more pitiable. Mike loves her but how much of that love was corrupted by fear after her suicide attempt? Even marriage would not clear the doubts and insecurities Janette has.
So, while the film is thoroughly entertaining, its ending seems to leave the audience suspended. The title reads Now and Forever but perhaps Will You Still Love Me Tomorrow? would have been more appropriate.
Now and Forever is currently out of print, but when it becomes available again we will let you know!