“Barbara Stanwyck is splendid in the role of Annie Oakley; this is indeed her most striking performance in a lo 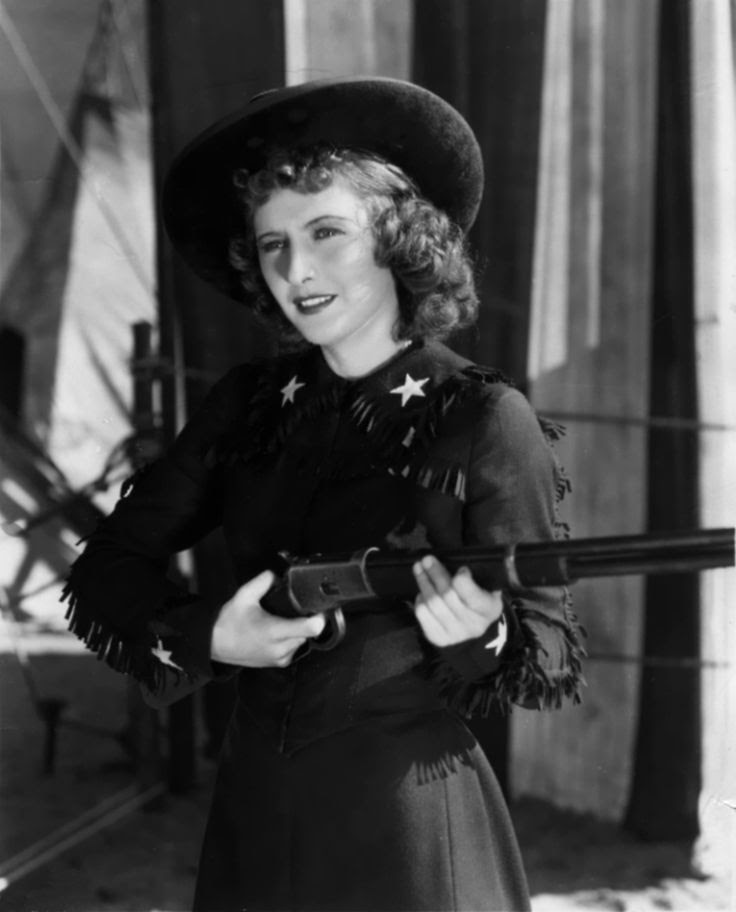 Andre Sennwald, a New York Times reporter, stated the above shortly after seeing the premiere of Annie Oakley in December 1935 and there is no denying just how right he is.

Annie Oakley is a rootin-tootin’ grand picture that tells the (albeit a bit fictional) story of the sharp-shootin’ pixie from the backwoods of Ohio: “Little Miss Sureshot” Annie Oakley, and Barbara Stanwyck is larger than life in her portrayal of the legendary star of Buffalo Bill’s Wild West Show.

Stanwyck, the tough-talking no-nonsense dame who sprang from the Bronx, was just beginning to find a footing in Hollywood in the mid-1930s. Warner Brothers studios was dishing her disappointing film projects and so she decided to take matters into her own hands and venture out as an independent player. Annie Oakley was her first feature with RKO studios and it gave her a hearty push into stardom. By 1939, she had an Oscar nomination under her belt (for Stella Dallas) and was raking in a hundred thousand dollars a year as salary. Miss Stanwyck had made herself a home in the limelight and would remain a shining star in the Hollywood galaxy until her dying day…and rightly so. As she proves in Annie Oakley, Barbara Stanwyck was able to take on any portrayal and truly make you believe she was the character you saw onscreen. 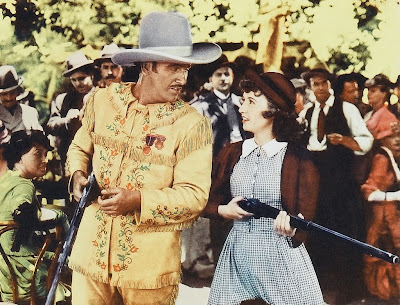 The film begins with the famous match between Miss Oakley and Frank Butler, who has his name (and character) changed to Toby Walker for the film. The rather conceited Toby Walker, the top marksman in the country, has been recently signed to Buffalo Bill’s touring Wild West extravaganza and while staying over one night at McLeod’s hotel in Cincinnati he makes a bet with McLeod that he can beat any marksman in that “hick” town. McLeod pits him against Annie Oakley, the little lady who provides him with the quail for his diners…quail that are always free of buckshot, unlike the game other hunters provide him with.

Annie, so sure of her shooting talent, puts her own money up for the bet as well as some that the townsfolk contributed from back home. When the time comes for the match however, she doesn’t have the heart to beat Walker at his own game. Mainly because she thinks Toby Walker is the gosh darn prettiest fella she ever laid eyes on!

Annie’s ability does not go unnoticed by Buffalo Bill’s agent Jeff Hogarth (Melvyn Douglas) who hires her for the show regardless of her throwing the match. And then it’s off to New York and all across America showcasing the marksmanship and brilliant riding skills of the cowboys and frontiersmen of the Wild West, all for the price of one dollar.

At first, Toby Walker and Annie Oakley are rivals, but his heart of gold shines clear and bright to Annie and she falls for him hard. He teaches her tips on showmanship and they court behind the tepees all the while keeping up a front that they despise each other for publicity purposes. Preston Foster is charming as Toby Walker and they really do seem the ideal match.

Annie Oakley boasts a chuck-wagon full of character actors such as silent comedian Andy Clyde as the cheap Scotsman, MacLeod, a superb Moroni Olson as Buffalo Bill, Pert Kelton as Toby’s old flame, and small parts for Dick Elliott and Willie Best. Pert Kelton later went on to portray the first “Alice Kramden” in the original Honeymooners skits from The Jackie Gleason Show.

Chief Thunderbird also shines as Sitting Bull, the ruler of the Souix tribe who fought against Custer in 1876. Here he grunts disapprovingly of the wild west heroics displayed by the men of the Buffalo Bill show and refuses to take a part in the public display….until Annie Oakley takes the stage, then he heartily adopts her as Little Miss Sureshot and joins the “the big happy group”.

This was George Stevens‘ first foray into the western genre and he marked this film with his signature stamp of excellence. The film wraps adventure with romance and comedy all in one briskly paced 90 minute package of entertainment, even if it does lack historical accuracy. Later, in the 1950s, Stevens would make the western genre his niche, directing such iconic films as Shane (1953) and Giant (1956). Barbara Stanwyck was another loyal cowboy; when asked what kind of film she enjoyed making most, her reply would inevitably be “westerns”.

In real life, Annie Oakley and Barbara Stanwyck were not unlike each other. Annie Oakley was a small-town gal who used her talent of marksmanship to catapult herself into international stardom. In a time when few women were celebrities she became a role model for other women, while Barbara Stanwyck was a “Little Miss Sureshot” in her own right : she aimed high at becoming a great actress in her time and she hit the bullseye dead center. Always a fighter, she embodied Annie Oakley’s spirit of rugged determination and confidence in one’s own abilities, as can be seen in this film.