For this month’s featured TV/Movie set I chose the classic Lassie Come Home, not because it’s a particularly noteworthy bit of set design, but rather because the movie has two oh-so-cute cottages….and because we happened to have a whole bunch o’ loverly screenshots handy.

Lassie Come Home was the very first of the Lassie films and it was such a success upon its release that Metro-Goldwyn-Mayer made the collie a star of the studio and featured her in a series of pictures : Son of Lassie, Courage of Lassie, Hills of Home, The Sun Comes Up, Challenge to Lassie, and The Painted Hills.


Like a lot of other Hollywood canine stars, Lassie wasn’t her real name and actually – gasp! – she was not a she but a he named Pal. Pal won the role after a nationwide search and played in the next five Lassie pictures, being admirably trained by his owner, Rudd Weatherwax. Pal’s long line of heirs continued the Lassie acting tradition for him up until the late 1980s. Incidently, Rudd Weatherwax is one member of a large family of animal trainers and is the uncle of Ken Weatherwax, who is best known for playing Pugsley on The Addams Family  television show.

Lassie Comes Home is undoubtedly the best of all the pooch’s films and its simple story was often times remade by a number of studios in the coming years. In this film Lassie follows her beloved master, Joe Carraclough (Roddy McDowall) to school everyday and waits outside the schoolhouse at 4pm precisely, when Joe leaves school, to walk home with him. Everyone in the village knows what time it is when they see dear Lassie pass by. Her internal clock never fails her. Of course, her being a big dog makes her have a big appetite and Joe’s parents (Donald Crisp and Elsa Lanchester) just don’t have the money to support her, let alone themselves, being as poor as they are.

So to solve this situation they sell Lassie to a kindly dog breeder, the Duke of Rudling, (Nigel Bruce) who takes her off to Scotland to groom for some upcoming shows. Lassie doesn’t enjoy the duke’s idea of prime accommodations however and decides to hike back to his master – it being only several hundred miles to home. On route to Yorkshire he meets a few kind souls who sustain him on his journey, one of them being Rowlie the “pots” man (played by the adorable Edmund Gwenn) and the Faddens, Daniel and Dally (Ben Webster and Dame May Whitty).

Pal was a real ham when it came to acting and – viewer beware – you need a good pile of Kleenexes on hand to watch this film. If Academy Awards were given to animals then Lassie would have earned one hands down (I mean, paws down) for his performance here.

Like most MGM films of the 1930s-1950s, Cedric Gibbons was billed as the art director with Edwin B. Willis handling the set decoration. Gibbons and Willis had a particular flair for creating old and weather-worn sets and the both the Clarracough and Fadden cottages have the look of being handed down from generations past. 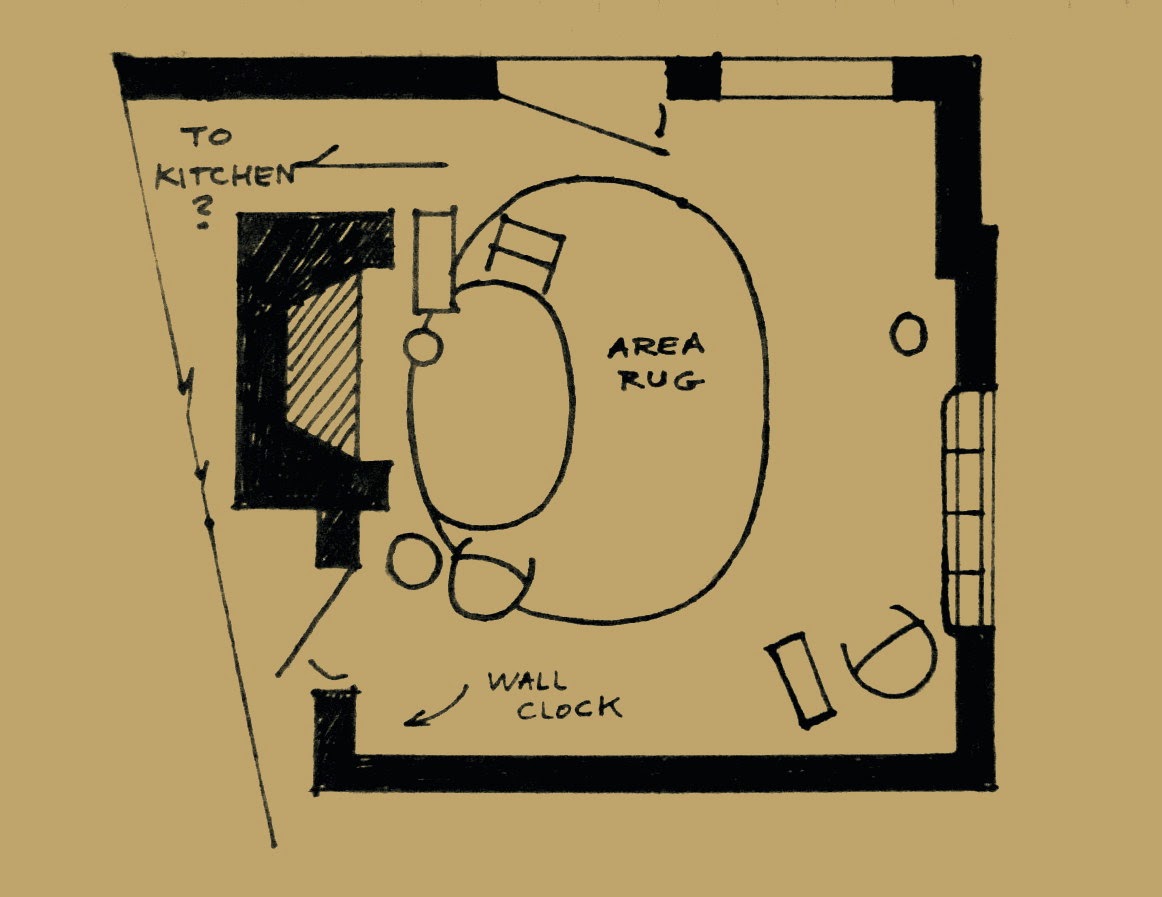 As poor as Lassie’s family was it looks as though they lived in a bigger cottage than the Faddens for they had two bedrooms, with Joe having a room of his own upstairs. Downstairs there was only the main room, a country kitchen with fireplace and a round dining table which doubles as a desk for homework and sewing work. 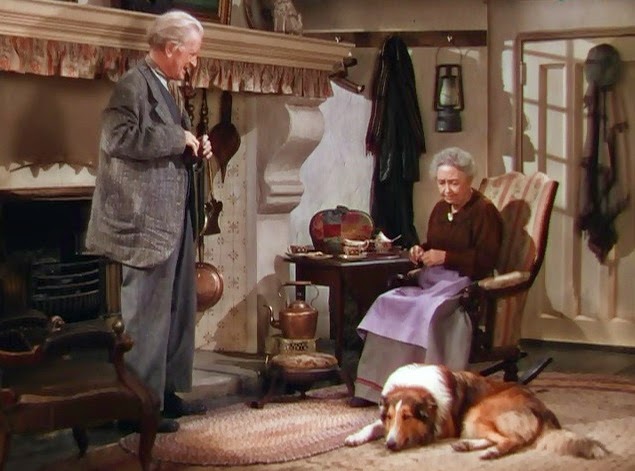 In the Fadden cottage there is the main room as well with a door leading to the kitchen or possibly to the bedroom. It couldn’t be more than 800 square feet and yet how comfortable a home it is! Just the right size. For a couple and a dog, that is…. 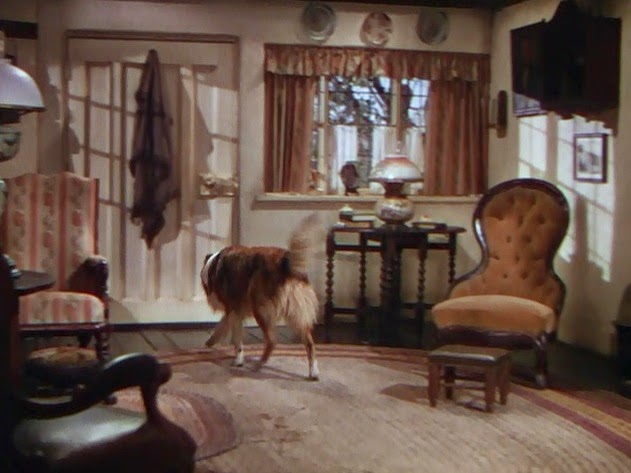 Another bit of interesting trivia : Ben Webster and May Whitty were husband and wife in real life and you can see their comradery in their scenes together. Reminds us of that other great acting couple: Stringer Davis and Margaret Rutherford. 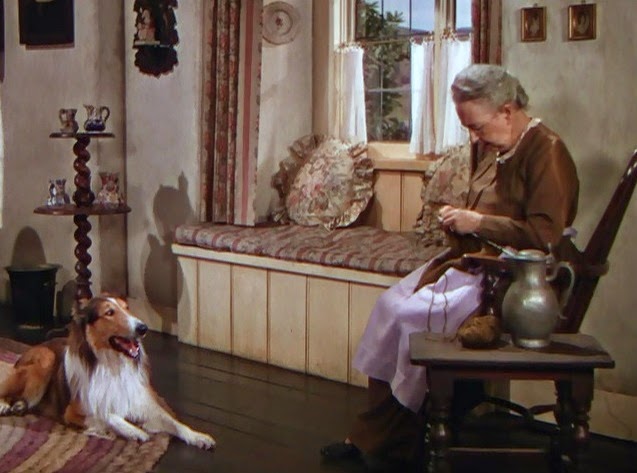 After they rescue the poor wee dog during a rainstorm, Dally asks her husband to bring her some milk to feed Lassie with and we get to hear this wonderful bit of dialogue :

“That’s the last of the milk Dally. Won’t be any for your tea tomorrow morning”

“It won’t matter Dan. I often think we do things just from habit. In America they say that they always drink their tea without milk”

“Well…. that’s because they haven’t learned any better”

Tsk, tsk, tsk…those Americans are something else. Can’t even drink a cup of tea properly! 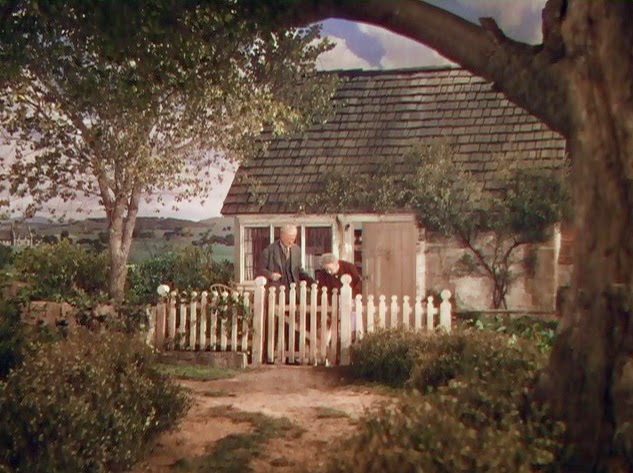 It’s a wonder no one has undertaken to build retirement homes of this size for elderly  (or newlywed) couples. Although with the amount of “stuff” most people have these days, this size home wouldn’t even be big enough to store what the average person has in their garage.

This post was originally featured on MovieFanFare last year.