“In life, there are always two possibilities….”

It is quite common to find a film that begins terrifically, loses a bit of its appeal midway through and then flounders at the end. But it is rare to find a film that begins slowly and then gets better and better until it reaches its climax. This is because screenwriters desire to “hook” their audience within ten minutes through a compelling script. Me and the Colonel is one of those rare films that fall into the latter category of having a slow beginning – and yet, one cannot say that it does not feature a compelling script. Quite the contrary; Me and the Colonel is wonderful entertainment.

Danny Kaye stars as Jacobowsky, a Polish Jew who flees from town to town throughout France trying to avoid the Nazis – as this takes place at the beginning of WWII. He is a clever and extremely resourceful man, a practical survivor. He uses people and situations to help provide him with the tools and opportunities to make his escapes. It is during his attempt to flee Paris that he meets Colonel Prokoszny (Curt Jurgens), a proud and stubborn Polish officer, and his aide Szabuniewicz (Akim Tamiroff).

Jacobowsky is reluctant to use the colonel in his escape plan since he is unapologetically anti-Semitic and extremely unhelpful. However, as the colonel is Jacobowsky’s only chance, he uses him to drive the car that will take them to southern France and to safety in Spain. Their flight from the Nazis is immediately complicated when the colonel “goes the wrong direction” and heads north into German-occupied territory to rescue his mistress Suzanne (Nicole Maurey). The colonel has a penchant for getting them into trouble and it is left to Jacobowsky to continually use his inherent wiles to rescue them from one scrape after another along their journey. It is through Jacobowsky and the colonel’s ordeal together that they manage to form a bond of friendship that transcends their differences. 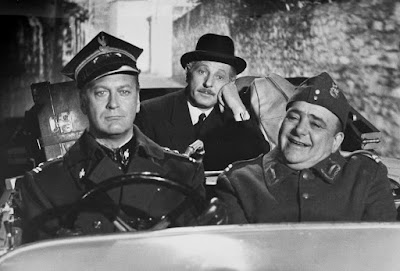 Danny Kaye was a marvelous actor. His skill at drama was often hidden behind the humorous masks of the characters he played. Me and the Colonel leans more towards drama than comedy and Kaye does not play Jacobosky for laughs. The publicity department at Columbia Studios attempted to warn Danny Kaye fans who were expecting zany comedy and tongue twisters that “Kaye pulls a switch.” It was an uncharacteristic role which he played with impressive ease….and won a Golden Globe for his endeavor.

Jacobowsky has such a beautiful soul and it is so appealing to watch him unfold the various layers of his character throughout the film. Suzanne recognizes what a rare individual Jacobowsky is and is lovingly drawn to him. He – and the audience – are left to wonder whether she feels a romantic attachment to him or simply honors him for his noble character.

I have always been amazed at how well Danny Kaye was able to play the romantic. Perhaps it is because we expect him to be the clown that his moments of displaying genuine warmth are all the more touching. Me and the Colonel features one of the sweetest love scenes he ever did. Tucked away in a French palace during a thunderstorm, he confesses his love to Suzanne and the predicament he feels he is in due to his loyalty to the Colonel. Not revealing what she feels, she simply asks him if he would like to dance and there, on the beautiful marble floor of the palace, they waltz. 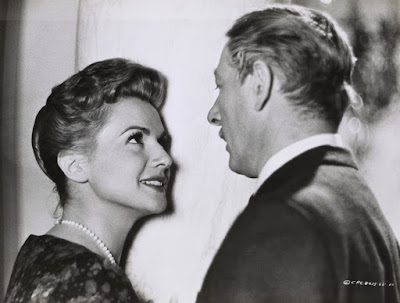 “More and more I like this Jacobowsky”
Me and the Colonel was nominated for Best Motion Picture at the 1959 Golden Globes and at the Mar del Plata Film Festival. It was based on a play by Franz Werfel ( “The Song of Bernadette” ) and S.N Behrman ( “The Pirate” ) that played for 417 performances on Broadway in 1944 with Louis Calhern, Annabella, Oskar Karlweis and Edward Bromberg as the four intrepid escapees.
It is a light-hearted but thought-provoking drama generously sprinkled with humorous dialogue. Touches of espionage and the serious undertone of its setting make it reminiscent of Ernst Lubitsch‘s To Be or Not To Be  (1942) and Howard Hawks‘ I Was a Male War Bride (1949).
Curt Jurgens, who almost always give a top-notch performance, overdid it in this role and his performance of Prokoszny borders on buffoonery. Yet, he redeems himself at the end of the film and we catch a glimpse of a more tender-natured colonel. Prokoszny is stiff-necked and ego-maniacal but nonetheless endearing. Jacobowsky is willing to give up his life for this man and understandably so. He is courageous and fiercely loyal. The colonel’s aide shows equal loyalty to him, as does Suzanne, even though she knows very well that he had affairs with women in every city he stopped at.
“In the cathedral of my heart, a candle will always burn for you!”
The lovely French actress, Nicole Maurey, is always a delight to watch. She is perhaps best known for appearing opposite Bing Crosby in the post-war drama Little Boy Lost (1953  and for her part in The Day of the Triffids (1963) where she was once again fleeing France for the Spanish border.
Me and the Colonel features beautiful location filming throughout France and a great supporting cast which includes Alexander Scourby, Françoise Rosay, and the marvelous Martita Hunt in a brief part as a nun who aids our heroes in their escape.