In today’s Guest Post, Constance Metzinger explores some of the funniest horse-racing comedies ever made!

Three Men on a Horse (1936) – Frank McHugh stars as a meek salesman who has an uncanny ability to pick horses. For that skill alone, a group of gamblers decides that he’s a man worth kidnapping. Joan Blondell and Guy Kibbee also star in this Mervyn LeRoy film.

A Day at the Races (1937) – This certainly ranks as one of the wildest comedies about the track – and who best to star in it than a trio of real-life horse betters: The Marx Brothers! In this classic Groucho plays a veterinarian posing as a doctor who, with the help of a misfit racehorse, tries to save a New York sanitarium from bankruptcy.

Straight Place and Show (1938) – If you thought A Day at the Races was zany, then check out The Ritz Brothers. Their comedy routines weren’t as rollicking as the Marx Brothers, but it is still a good rule not to eat peanuts while you watch. In this picture, they take up jobs as wrestlers to raise money to help a young man train his first racehorse.

Scattergood Rides High (1942) – Guy Kibbee starred in a whole slew of Scattergood films during the 1940s, so naturally the small-town philosopher ended up eventually visiting a horse farm. Jed Prouty and Dorothy Moore also star in this 4th entry in the series.

It Ain’t Hay (1943) – Bud Abbott and Lou Costello often used their own material, but on occasion they resorted to an old script, which was the case with this film. Princess O’Hara (1935) was a Jean Parker/Chester Morris comedy that perfectly suited the hi-jinks of the Universal boys. Lou plays a street vendor who finds his nag has been replaced with a thoroughbred. In no time at all, he is off to the tracks!

So You Want to Play the Horses (1946) – This one isn’t a feature film, but a gem of a short film that can’t be passed up while we are mentioning horse racing comedies. George O’Hanlon made an excellent series of “So You Want to….” comedy shorts featuring his Joe McDoakes character, and this one covers the ins and outs of the betting game.

The Fabulous Suzanne (1946) – This amusing Republic quickie features a young Barbara Britton (best remembered for playing the scatter-brained Mrs. Brown in the television series My Favorite Martian) as a waitress with a surefire “system” for winning at the racetrack. Otto Kruger and Rudy Vallee also star.

Easy Come, Easy Go (1947)  – Also known as Easily Seen, Easily Forgotten, but while you watch it is fun. This Sonny Tufts comedy features one of the largest Irish casts in any film – Barry Fitzgerald, Arthur Shields, Frank McHugh, and Allen Jenkins to name just a few. Frank Faylen and Diana Lynn also star.

The Return of October (1948) – This is a silly but engaging family comedy about a trainer (James Gleason) who loved horses so much that he swore he would come back to life as a horse. His niece (Terry Moore) believes he did just that and Professor Bassett (Glenn Ford) finds her to be an excellent subject for his upcoming thesis.

Sorrowful Jones (1949) – Sorrowful Jones may sound like the name of a horse, but it is really Bob Hope‘s character, who is a cheap bookie who is stuck playing nursemaid to a little girl after a man leaves her as a marker for a bet. Lucille Ball also stars in this comedy and the twosome of Hope and Ball were reunited in three more films, including Fancy Pants just a year later. 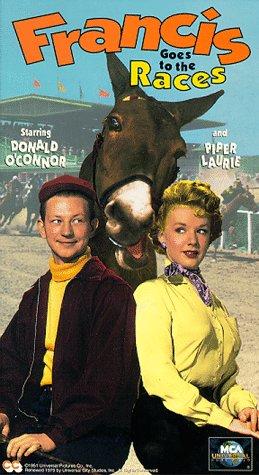 Francis Goes to the Races (1951) – Francis may be a mule, but he enjoys a good race just like any horse. Here, Francis gives Peter (Donald O’Connor) some hot insider tips “straight from the horse’s mouth” that come in handy when Peter attempts to help his gal (Piper Laurie) and her grandfather repay debts they owe to a racketeer.

Money from Home (1953) – If Abbott and Costello can make a racing picture, so can Martin and Lewis. This one has veternarian Virgil (Jerry Lewis) donning a jockey outfit and racing to the finish on an underdog, much to the surprise of Dean Martin, Mara Corday and Pat Crowley.

The March Hare  (1956) – This colorful British comedy is set in Ireland and stars Cyril Cusack as a drink-loving trainer who whispers a “magic word”, obtained from the fairy queen, to his horse before each big race. A sideline romance between Terence Morgan and Peggy Cummins, and a slew of great British character actors (Martita Hunt, Wilfred Hyde-White), make this a gem.