Greer Garson and Walter Pidgeon were the epitome of enduring love. In the majority of their films together they played married couples, a husband and wife perfectly balanced :Garson’s dignified but gentle and kind nature opposite Pidgeon’s strong and stable nature. They were a match made in MGM Studio’s heaven and were one of Hollywood’s most durable box-office teams. Off screen they were life-long friends. ”I did eight pictures with that gal and we never had a bad word between us,” Pidgeon once told an interviewer.

In 1937, during a trip to London, MGM’s head Louis B. Mayer’s noticed Greer Garson in a dramatic play called “Old Music”, and being very much impressed with her demeanor he quickly signed her to a contract. MGM had recently scored successes with Boys Town and Men of Boys Town, two films dealing with child welfare, and so, in 1940, Louis B. Mayer decided that adapting Ralph Wheelwright’s best selling novel “Blossoms in the Dust” would be a great follow-up film and an excellent vehicle to showcase his new lovely leading lady, Greer Garson, who had triumphed as Robert Donat‘s wife in Goodbye, Mr. Chips (1939) and opposite Laurence Olivier in Pride and Prejudice (1940). 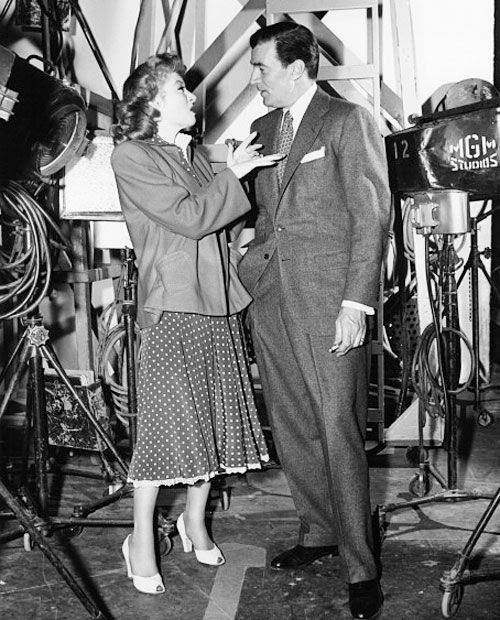 Garson would be teamed with Walter Pidgeon, one of MGM’s most seasoned actors, having gone through the fire of refinery by starring in a string of successful B films as detective Nick Carter. The rugged Canadian had first met Ms.Garson in a screen test and had quipped, “I’ll bet we’re starring together and running this studio before you know it!”. Prophetic words.

Blossoms in the Dust was a heartwarming drama about Edna Gladney, a welfare worker for children who was spurned on in her maternal efforts to help children find a good home through the premature death of her own dearly loved son. The film had an air of gentility and quiet gallantry which set the tone for Garson and Pidgeon’s subsequent teamings, most notably Mrs. Miniver, their second film together and one of their most fondly remembered films today.

The Minivers were an average British couple who braved the Blitz heroically, remaining courageous and hopeful even when the deaths of those near and dear to them hit hard. Although war and its ravaging effects was spreading like wildfire across Europe and Great Britain, the Miniver’s proved that bravery and stability still remained in England, if not in the land at whole but within each citizen’s hearts.

Independently the fight could be daunting, but together they became an indestructible rock. As a couple, they depended on each other and drew off of each other for strength and encouragement. This was to be one of their strongest assets as a team.

Mrs. Miniver was an enormous critical and box-office success. Movie-goers around the world thrilled to it and President Roosevelt was so impressed with the film – and its propaganda value – that he ordered millions of leaflets containing the vicar’s speech near the end of the picture to be scattered over occupied Europe by Allied warplanes.

Mrs. Miniver was followed by the equally successful Madame Curie (1943), an autobiographical account of the Curie’s quest to discover radium. Walter Pidgeon claimed this was his favorite film to make, and in his opinion, one of his best performances.

While they portrayed the ideal married couple on screen, off screen there was no romantic involvement between the actors. Walter Pidgeon was wed in 1931 to his second wife, Ruth Walker and they remained happily married until his death in 1984. Greer Garson’s first marriage had ended during the honeymoon. The same year that Madame Curie was released, Garson wed Richard Ney, the young actor who had played her son in Mrs. Miniver. Despite the fourteen year age gap, they had fallen in love during the making of the film but due to pressure from MGM postponed their nuptials until after Miniver‘s release. The marriage would not last. Within four years they were divorced. It was not until she met E.E Fogelson during the making of Julia Misbehaves that she found lasting love. They were married until his death in 1987. 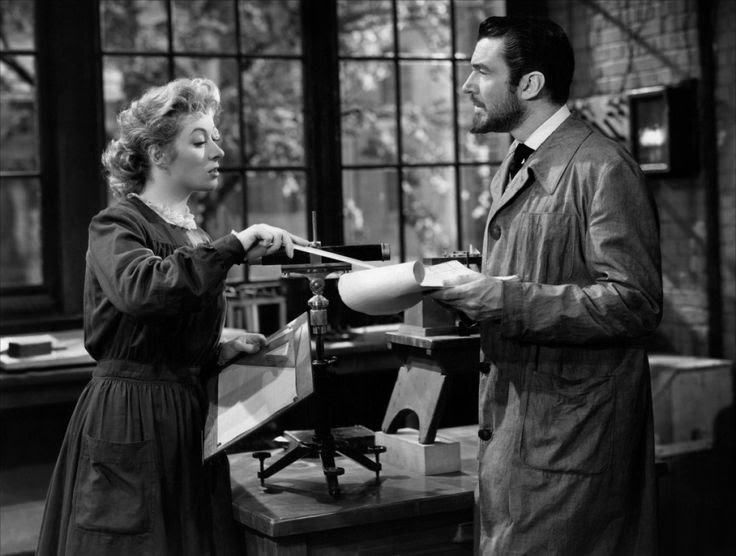 Garson and Pidgeon’s next project together was an adaption of Louis Bromfield’s novel Mrs. Parkington. Set in the late 1800s, it followed the life of an Irish girl in America, from her early days helping her mother run a hotel out west, to her marriage to the illustrious Major Parkington, and their rise to becoming one of the most powerful industrialists in the states. It also followed – in the years ahead – what became of their children and grandchildren. This allowed Greer Garson to be “aged” from a young woman to an elderly matriarch in her eighties. Pidgeon was excellent as the rambunctious Major, ready to face any challenge that may come to America, but unaware of the tempest brewing within his own home. 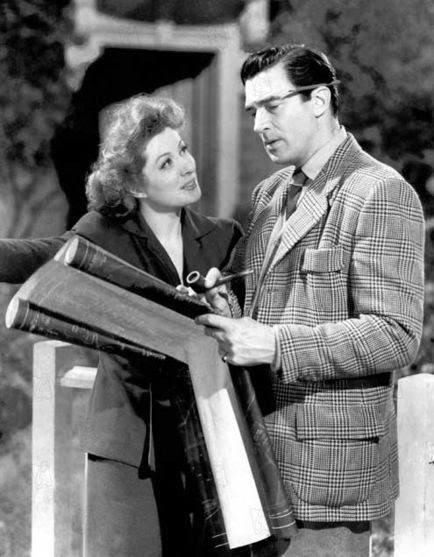 Walter Pidgeon was busy in the mid 1940s making films such as Week-End at the Waldorf, The Secret Heart and If Winter Comes while Greer Garson made The Valley of Decision and the ill-fated Adventure. By 1948, the powers-that-be at MGM thought it was time to re-team the golden couple, but fearing the public’s disinterest in noble portrayals, they decided to cast the duo in a comedy – Julia Misbehaves. This proved to be a mistake. Although the film had a great cast including Elizabeth Taylor and Peter Lawford, Garson was much too prim for the flippant role of a mother who abandons her children and home-life for the stage. Her new hairstyle was not nearly as flattering either!

And so, the following year they returned to the splendor of the Gilded Age in That Forsyte Woman, an adaptation of John Galsworthy’s novel “A Man of Property”, part one of his epic Forsyte Saga. Errol Flynn gave one of his best performances as Soames Forsyte, the wealthy heir who dearly loved Irene (Garson) but, once again, it was gentle Walter Pidgeon who won her hand at the end.

Television was slowly creeping its way into America’s living rooms and the big movie studios were seeing their cash-flow slipping away. With nostalgic fortitude, MGM turned to trying to recapture its past magic with re-releases of its former box-office successes as well as turning to sequels. The Miniver Story was one such try which also proved to be a failure. It’s somber tone was not welcome when audiences were clambering back to the theaters to watch grand musicals in glorious Technicolor.

Their last picture together would be in Scandal at Scourie made three years later. This color melodrama returned to the theme of their first film – orphans. This time, instead of aiding orphans, they were fighting for the opportunity to keep a little girl that caught their fancy. 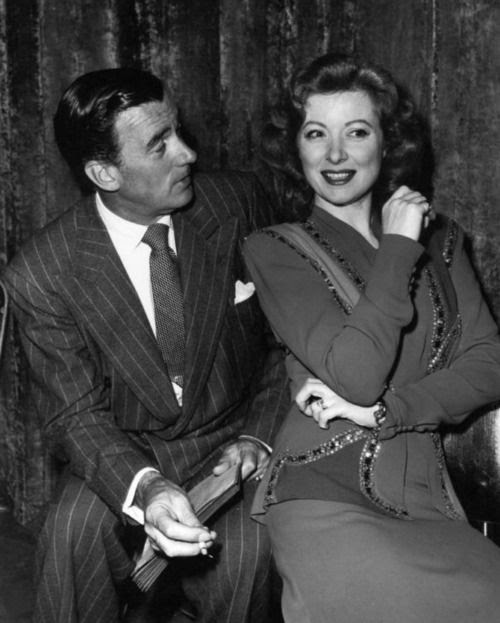 Walter Pidgeon and Greer Garson were both extremely talented actors and, unlike many other actors of the era, were very much in real life the characters they portrayed so often onscreen. This brought to their characters and the pictures themselves an honesty that kept them from becoming trite.

Garson once defined in an interview what she considered a film ought to achieve,  “I think the mirror should be tilted slightly upward when it’s reflecting life — toward the cheerful, the tender, the compassionate, the brave, the funny, the encouraging, all those things — and not tilted down to the gutter part of the time, into the troubled vistas of conflict.”

As a couple onscreen, Walter Pidgeon and Greer Garson often showed us how to live life by looking on the brighter side, ever remaining hopeful despite what conditions you face, and always helping your fellow man knowing that he often faces similar struggles.

Constance Metzinger runs the website Silver Scenes, “a blog for classic film lovers.” This article originally ran last year and is being reprinted as part of our tenth anniversary celebrations.