What can be written about The Shining at this point? It’s a masterpiece directed by the legendary Stanley Kubrick that tells a horror story both in the mind and outside it. A haunted house film filled with psychological trauma. I didn’t want to put The Shining on this list but I haven’t seen it uncensored in a few years and wanted a film I knew was truly creepy. The film is easy to make fun of now with its somewhat racist and misogynist views, and boy, does Shelley Duvall continue to irritate me, but the horror is never diminished. It’s just as fascinating and worthy of being on your Halloween list, if not being the key film for All Hallow’s Eve.

Writer Jack Torrance (Jack Nicholson) moves his wife Wendy (Shelley Duvall) and young son Danny (Danny Lloyd) to the Overlook Hotel where he’s set to be the winter caretaker. The Overlook has a dark history after the last caretaker murdered his wife and children but Jack isn’t concerned. When Danny starts seeing ghostly apparitions and Jack slowly descends into madness it seems the Overlook’s past might be seeping into the new generation.

I understand fans who cite “it’s not the same as the novel” but I should disclose I’ve never read Stephen King’s original novel. I am, however, open to watching the four-hour miniseries if only because I hope Wendy is a better character. Let’s get some of the characterization out-of-the-way. Before I get in too deep let me say this will probably be a scattered review because there’s so much to discuss. Kubrick’s casting here is hit or miss. I adore Jack Nicholson in this role right off. This was one of his first leading roles after winning a Best Actor Academy Award for One Flew Over the Cuckoo’s Nest in 1975 and he makes Jack Torrance his own; he’s frightening, funny, and utterly unpredictable and you can’t wait to go from scene to scene to watch what he does next.

The only problem I have with his performance is you never don’t believe he’ll go mad. From the opening minutes with Nicholson’s angular eyebrows and his persona you know “Well, this guy is going to go crazy.” I have heard Torrance in the novel is supposed to be an unassuming man, and I think having someone who appears normal looking and didn’t have Nicholson’s persona of playing a manic lunatic could have been better. But who am I kidding? I love Nicholson in this role. Scatman Crothers is also amazing as the Overlook cook Dick Halloran. Halloran is the epitome of the “mystical Negro” trope of literature and he come off as a stereotypical character but the way Crothers inhabits the character makes him sweet and charming.

The only character I flat-out hate is Shelley Duvall. Yep, can’t ignore it. I hate Wendy Torrance and the way Duvall plays her. I don’t blame Duvall for how the character is written. I find her to be adorable in other things (particularly in Shelley Duvall’s Faerie Tale Theater), but I hate how she acts as Wendy. Wendy is the nurturing mother constantly making excuses for her husband, especially when she tells the doctor the story of how Jack broke Danny’s shoulder. Once they get to the Overlook, Wendy becomes a total doormat, letting Jack berate her. I have to wonder if this was Kubrick’s late attempt at dissing feminism because he makes Wendy ineffectual and too stupid to live! You end up rooting for Jack a lot of the time as his berating of Wendy is funny.

The big reveal — Wendy discovering Jack’s novel (“All work and no play makes Jack a dull boy) — is terrifying and the one piece of acting Duvall does well. As she frantically runs through the pages, seeing the writing is all the same, the subtle change in her demeanor heightens the tension with each page turn. If only that fear had resulted in her being a resourceful and dominant character. Of course right after this is the best scene of the movie where she threatens Jack with a baseball bat. I’ve included the scene below for you (NSFW) and it not only highlights Nicholson as a villain, but also shows how you have to root for him against the inept and annoying Wendy. Jack takes on the role of the audience here, asking Wendy questions and effectively telling her to hit him, dammit! By the end Wendy becomes so dumb she can’t open the pantry door, only realizing after trying to open it five times that it’s locked! 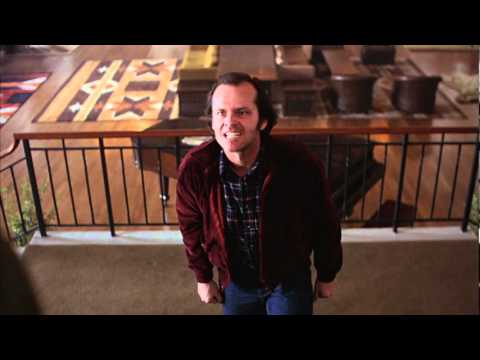 The above scene is the right blend of location with horror as Wendy’s rise up the stairs places her further away from escaping Jack while moving her deeper into the hotel. The hotel itself becomes another character of the film and is beautiful. One of my favorite non-horror based moments is the opening tour given to Wendy and Jack. You get a great overlook (pun intended) of the hotel and it’s just gorgeous, almost making you forget the hotel is built on an ancient Indian burial ground (in any other film I’d have been out like a shot). The hotel’s beauty and expanse makes you believe you could easily spend the winter cooped up there. I, for one, could easily get a lot of work done in the Overlook. As the film progresses the hotel starts to invade the frames further. The tracking shots of Danny’s bike on the carpet are great examples with the carpet and bike dividing the frame, and from there you have the familiar sounds of the bike’s wheels on the floor (lulling you into security) where you expect something to jump out around the corner simultaneously. The shot of Jack looking into a model of the maze not only highlights the lovely maze itself but also puts Jack into the role of the God’s eye furthered when the camera zooms into the maze model which morphs into Danny and Wendy in the maze itself (gotta love those inventive Kubrick shots).

The research on The Shining is extensive, and whenever I watch it I notice something different. With this rewatching I noticed the idea of doubling taking place, for any one thing its opposite is shown. Obviously, you have the two caretakers, Jack and Delbert Grady (Philip Stone). You have Grady’s two daughters dressed up to be twins but it’s apparent they aren’t, making them all the more unsettling. There’s the beautiful woman in the bathtub of room 237 and the haggard corpse, etc. All of these combine with Jack being near mirrors, again presenting a double image. When Jack goes into the Gold Room for the first time and talks to the bartender Lloyd (Joe Turkel), there’s a mirror behind them with the implication Jack is talking to himself. The lines become blurred throughout as Jack’s madness increases, almost as if the ghosts are slowly moving out of the mirror and into the real world. To go further, the ghosts move out of Jack’s imagination and into the frame of the film for the audience to consume. (I’ll get into the idea of celluloid and audience consumption in a second.) When Wendy is finally able to see the ghosts at the end it’s safe to assume the horrors of the Overlook are no longer confined to the mirrors of Jack’s mind, but now manifest physically. The film appears to attack television and forms of entertainment, with Jack’s famous line “Here’s Johnny” being lifted from the Johnny Carsn-era Tonight Show, returning us to the opening of the film when Danny mentions knowing the meaning of cannibalism because he “saw it on television.”

For a horror masterpiece it’s surprising, much like it was with my Leslie Vernon review, to see how little gore is in this. The horror comes in the film’s final half and there’s only one one-screen murder presented (the murder of Grady’s family is done before the events of the film and presented after they’ve occurred). I am curious as to the movie’s timeline. The head of the Overlook mentions Grady murdered his family, but it’s never said if Jack was the man for the following winter. The way it’s read it appears several winters have passed with little incident unless there’s something I’m missing? With that being said, Grady is the best incarnation of the Devil as well as representing Jack’s inner demons. The way Grady seduces Jack into “correcting” his family at the end is so suave you almost believe this is the man Jack wishes he was. By the end Jack has become an axe-wielding homicidal maniac complete with limp, far removed from the cool Delbert Grady.

Frightening, smart, and containing best use of a bear costume that still scares the living crap out of me, The Shining is a must-see no matter what. Seriously, that scene with the bear/dog costume never fails to scare me to death and I don’t know why, maybe because it makes you scratch your head? The acting is amazing from Nicholson, and while I find Wendy to be an annoying character it’s fun watching her be terrorized. This is the quintessential Stanley Kubrick film and worth the watch for sure!

Kristen Lopez is an entertainment writer with a Masters in English. She predominately focuses on reviewing classic films at her site, Journeys in Classic Film, but also reviews contemporary films and writes feminist critiques at Awards Circuit (www.AwardsCircuit.Com)  and co-hosts the Walt Sent Me podcast.