Some people refuse to watch Westerns on the grounds that the predictable parade of horses, gunfights and tumbleweeds makes them ultimately shallow and boring. They are missing out; there were Westerns made in the 1950s that balanced action with internal conflict and embraced moral ambiguity, and these films are a far cry from the shoot ‘em up variety. The Big Country (1958) was one of these and is a wonderful film for people who insist they don’t like Westerns.

The first element that sets this Western apart is its exploration of individual morality. Sea Captain James McKay, played by Gregory Peck, journeys west to reunite with fiancée Pat (Carroll Baker) and meet her father, Major Henry Terrill (Charles Bickford). The Major has the young couple’s future planned out on his Texas cattle ranch, and his way of thinking — that might makes right, that only money and power have value — does not sit well with a self-determined, contemplative man like McKay.

McKay isn’t bothered that his ways seem strange to the people on the ranch, but when Pat agrees with them that McKay’s self-effacing attitude makes him appear weak and cowardly, McKay has to choose between the woman he loves and his own moral code.

The film certainly isn’t lacking in more typical Western action; alongside McKay’s personal conflict is the vicious feud between Maj. Terrill and Rufus Hannassey (Burl Ives). Ostensibly over water rights to the Big Muddy, their fight is simply ego-fueled and petty, resembling class warfare between the haves and have-nots. By all outward appearances Terrill is an outstanding citizen, but Hannassey reminds him that it takes more than money and manners to make a gentleman.

However, this is no “horse opera,” and the second thing that sets this story apart is the multi-layered love interests. School teacher Julie Maragon (Jean Simmons), friend of Pat and owner of the Big Muddy, fends off the unwanted advances of Hannassey’s shiftless eldest son Buck (Chuck Connors). Ranch foreman Steve Leech (Charlton Heston article) is not pleased at the arrival of McKay, desiring Pat for himself. And there is the growing mutual admiration between Julie and McKay which ultimately causes him to risk his life to save her.

Such a grandly conceived film of epic scope requires skilled actors to support the story, and the cast of The Big Country delivers. Gregory Peck was at the top of his game, with hits such as Captain Horatio Hornblower (1951) and The Man in the Gray Flannel Suit (1956). Seeking more control over the types of roles he played, he formed his own production company and shared the producer role with director William Wyler. The two had worked together previously on Roman Holiday (1953). Audiences loved to see Peck in solidly heroic roles; the part of Jim McKay seemed tailored to him — as it should, as Peck also helped adapt the script from the novel by Donald Hamilton.

Born in London, Jean Simmons had been in major British productions such as Black Narcissus (1947) and Hamlet (1948), making her a huge box office draw on both sides of the Atlantic. A Western might have seemed incongruous for her talents, but director Wyler said of her, “The first thing you look for is talent and this girl is full of it. She can play comedy and drama with equal facility.”

Nominated for her thumb sucking in Baby Doll, (1956) Warner Brothers viewed Carroll Baker as the next Marilyn Monroe. But between troubles with Warner Brothers and husband director Jack Garfein, she missed out on roles in Rebel Without a Cause (1955), The Three Faces of Eve (1957), and Cat on a Hot Tin Roof (1958). She was pregnant while filming The Big Country, putting the already difficult shoot on a tight schedule.

Charlton Heston initially turned down his role; after the success of The Ten Commandments in 1956, he didn’t think the role of ranch foreman Leech was big enough. Still, working with Peck and Wyler would be a great experience. Undoubtedly it was worth it; Heston worked with Wyler the next year on Ben-Hur, which won eleven Oscars, including one for Heston.

1958 was a great year for Burl Ives. In addition to rave reviews for his work as Big Daddy in Cat on a Hot Tin Roof, he also won an Oscar for Best Supporting Actor for The Big Country. Of the major actors on the set, he was one of the few who didn’t have a problem with director Wyler. “I found Willy delightful. I never got annoyed at him. I learned a helluva lot from him.”

Charles Bickford had also worked with Wyler before on a film called Hell’s Heroes (1929). (The film was remade several times, most notably in 1948 by John Ford and titled 3 Godfathers, starring John Wayne.) As prolific as his career was–Anna Christie (1930), The Plainsman (1936), and Duel in the Sun (1946), among others–it’s surprising that his name isn’t better known. Feisty and independent, his constant arguing with Louis B. Mayer got him blacklisted for a time. Age had not changed him; he argued with Wyler and eventually stormed off the set, returning only when Wyler threatened to report him to the Screen Actors Guild.

William Wyler had already won two of the three Academy Awards he would ultimately receive–Mrs. Miniver (1942), The Best Years of Our Lives (1946), Ben-Hur (1959)–when he teamed up with friend Peck to co-produce The Big Country. Like Peck, Wyler also sought more creative control, but ultimately, their experiences on the set cost the two men their friendship. Wyler’s diverse body of work is the result of a career that spanned 45 years, from 1925 to 1970.

Wyler’s use of cinematography and Jerome Moross’ Oscar-nominated score elevate the film above the typical Western. Wyler had just finished the anti-war Friendly Persuasion (1956) in which violent conflict is portrayed as something to be avoided but sometimes necessary. The Big Country goes one step further by portraying conflict as ultimately pointless. Wyler’s use of long shots and muffled sound during the fight between McKay and Leech as well as the final showdown between Terrill and Hannassey illustrates the insignificance of human conflict against the greater landscape. It is, after all, a big country — the petty feuds between men mean little in the wider scheme.

The story of the outsider trying to enter the group, receiving hard knocks, and ultimately becoming one of the group is nothing new in a Western. The Big Country reverses the theme and explores the results; McKay neither wants nor needs to become part of their violent ways, and he’s got the funny hat to prove it. His detachment from their concerns and questioning of their moral authority is ultimately what arouses Pat and Leech’s contempt for him, and McKay remains the outsider, by choice, throughout the entire film — not the kind of social non-conformity one expects to see in a 1950s film.

The Big Country contains action, drama, exquisite cinematography, and compelling characters big enough to convince anyone to take a second look at Westerns.  A great example of the epic films of the ’50s, it also has a director and cast at the peak of their creative prowess. Don’t let old assumptions cause you to miss this fun and insightful tale.

Now, catch the action of The Big Country with the theatrical trailer from 1958: 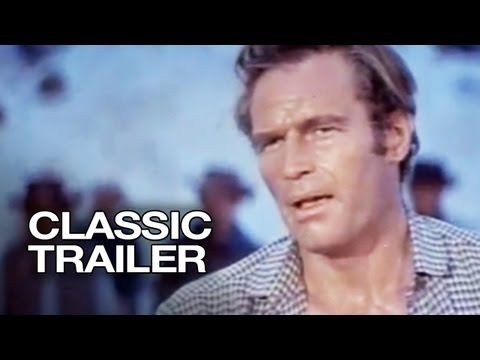 Victoria Balloon is a writer, classic film enthusiast and pop-culture pundit. In addition to knitting small appliances, Victoria is currently involved in helping to bring back the Matinee at the Bijou TV series in an HD sequel to be hosted by Debbie Reynolds.

You can trek over to the Bijou Blog, where cowgirl wordsmith Victoria has even more to say about this epic yarn, a sagebrush saga just too big for one blog. And for another take on The Big Country, be sure to check out John McElwee’s comments over at Greenbriar Picture Shows.

To read our article about Gregory Peck the leading man of The Big Country follow this link: Gregory Peck: Leading Man in a Gray Flannel Suit