Editor’s Note: This article was originally published in September of 2010.

Broads… They say that you can’t live with them and you can’t kill them… or can you? Anyway, so goes Billy Wilder’s supremely taut tale of murder and insurance fraud that has tritely (though, very appropriately) been called one of the earliest classic examples of film noir, with its dark style of filmmaking and even darker story tone. Yes, I must admit that I had never seen the film, until recently. There are always going to be “classics” that are missed with all the thousands of films available for consumption, and being a “slightly younger” gentleman, there was a time that getting my hands on—let alone making time for—movies from the ‘40s was a bit tough for me.

So, that’s the excuse (as lame as it may be) that I’m going to go with for never viewing the moody 1944 thriller, Double Indemnity, until now. Furthermore, I’m not all that familiar with the work of Mr. Wilder (though, I love The Apartment), but that’s something soon to be remedied since I tend to gravitate towards films dealing with grim and controversial subject matter (even when they’re comedies), and Wilder thankfully didn’t seem to shy away from such topics. After all, James M. Cain’s novella of the same name from which the film is based is certainly rife with nasty business, making the project incredibly tough to greenlight due to the rigidity of the era. Wilder was definitely a brave man who deserves credit for thumbing his nose at authority and venturing to make one of the most daring films of the ‘40s (and possibly the best of its kind?) even in spite of stern and conservative opposition.

After viewing DI, I became overwhelmed with feelings of gratitude that I didn’t grow up in the ultra conservative days of the ‘40s and ‘50s, especially when it comes to the movies that would have populated my formative years since they all had to adhere to the dreaded Hays Code. Now, I want to be very clear here: I understand that this is a biased viewpoint, and that folks who did come of age during this time will claim that it wasn’t that bad. After all, most people are always going to hold their childhoods near and dear to their hearts.

Furthermore, I’m not trying to rile anyone up. I swear I mean no disrespect to the era nor am I attempting to denigrate the filmmaking that took place during this time. There are tons of worthwhile old movies that are great for a multitude of reasons. Besides, storytelling is storytelling. I don’t feel that any era is particularly superior when it comes to movie-making. There have been good and bad films made every year since the medium was born. That’s kind of my point. Double Indemnity is a pretty incredible film. That’s why it befuddles me that there would ever be an organization that would try to keep a film like this from being made, all in the name of human decency, which is complete nonsense. What I’m trying to say is that while there will always be lost and confused souls who will unfortunately try to control what others do, there really isn’t anything in DI’s filming of the subject matter that’s all that objectionable (even in the elements that were eventually changed or cut, such as the gas chamber scene) looking back on it.

I understand that the times were different (I found it very amusing that the furthest the film could go as far as sexuality, was discussion of Barbara Stanwyck’s anklet), but the Hays Code was a little too strict even for the ‘40s. Think of all the cinematic ground that could have been broken if such needless “rules” didn’t exist. I’m just happy that I grew up in a time where the ratings system was implemented to let filmmakers craft the kind of movies that they wanted and freedom of expression in cinema was something that was a little more coveted. Furthermore, I was disappointed to learn that singer Kate Smith actually led a campaign against the release of DI on moral grounds. I’m a lifelong Philadelphia Flyers fan, and Smith’s rendition of “God Bless America” that’s always played before pivotal Flyers’ games is considered one of the best good-luck charms in sports. Discovering that Smith was a “moral crusader” was a bit disheartening. Although, writer Cain later recalled that her protest probably added about a million dollars to the film’s gross, perhaps proving that maybe things don’t ever really change that much… but, I digress…

Double Indemnity concerns insurance salesman Fred MacMurray (in a very unconventional role for him) who stumbles into an illicit affair with lonely and embittered housewife Stanwyck (also playing against type as a sultry femme fatale). They eventually decide that together they’ll take out an accidental insurance policy on Stanwyck’s husband (Tom Powers) unbeknownst to him (a feat in itself), and then kill him and make it look like an accident to collect the money. Additionally, they dedicate themselves to making the accident look like Powers fell from a moving train so that the policy will pay out twice as much because it contains, you guessed it, a “double indemnity” clause. (Incidentally, Stanwyck’s mother was killed circa 1911 due to a fall from a trolley car. I can’t help but wonder if this film hit close to home for her).

Now, I’ll confess that at first I had a real problem with MacMurray’s character, considering him to be a real slimeball. After all, the guy isn’t in Powers’ house for five minutes before he’s hitting on a man’s wife. However, upon further reflection I came to the conclusion that he was just a bored, weak-willed individual who gave into sinful temptation. In other words, the character was a human being… fallible, like we all are (aside from the whole murder thing, of course). I was also disconcerted that since MacMurray’s character apparently knew all the ins-and-outs of the insurance game, that he would be willing attempt such a harebrained scheme. (Did he really think that no one else would be on the train?) That this would be the case is especially curious, considering his relationship with Edward G. Robinson, the best claims adjuster in the business whose job it is to investigate phony claims. Then again, perhaps that’s also a part of fallible human nature that MacMurray would be so obstinate and megalomaniacal that he would think he could still get away with the crime. Anyway, most of my qualms were quickly assuaged due to the strong performances of the cast and the crackling dialogue of Wilder and Raymond Chandler’s tight script.

Just in case there are folks out there, like myself, who still haven’t seen this film, I’ll forgo spoiling any more of the story’s machinations. Besides, to do so would be missing the point behind why the tale is so suspenseful. Suffice it to state that MacMurray and Stanwyck’s “perfect crime” eventually goes haywire, and all involved are sent scrambling. That’s where the heart of the film lies, in the relationships between the characters. Robinson almost steals the movie as the fast-talking, wise-cracking, sharp-as-a-razor investigator whose explanation to his boss as to why Powers’ death couldn’t be a suicide is possibly the best moment in the film. However, Stanwyck is equally superb, in a part that netted her an Oscar nomination, as the cold and calculating temptress who always keeps the audience guessing as to what she really wants. Although, that could be because she’s unsure of her motives herself. The stunning Stanwyck gained all of this success despite that horrid blonde wig. Wilder claimed the look of the ridiculous wig was intentional in order to telegraph her phoniness, which ostensibly makes sense.

As far as MacMurray is concerned, he could be the unsung hero of the production. I was really taken with how he was able to essay the part of being a heel while simultaneously conveying that guilt and paranoia were eating at him. This is in addition to the almost tender relationship he shared with Robinson (which culminated in an ending most likely far superior to the aforementioned gas chamber scene) as well as with Stanwyck’s stepdaughter (Jean Heather). The only problem with the film that put me off was the EXTREMELY fickle nature of the characters. I don’t think I’ve ever seen attitudes and feelings change so drastically and so quickly in a film before. Sometimes these turns are so jarring that it flirts with not making any narrative sense. Miraculously, the actors are so good that they manage to get away with these transgressions. Besides, it seems that the film is more concerned with human behavior and the consequences of one’s actions than with their actual motives. Hey, that works for me. I was initially prepared to give DI three and half stars out of five, but considering the performances, I’m going to give it four stars “right down the line.” 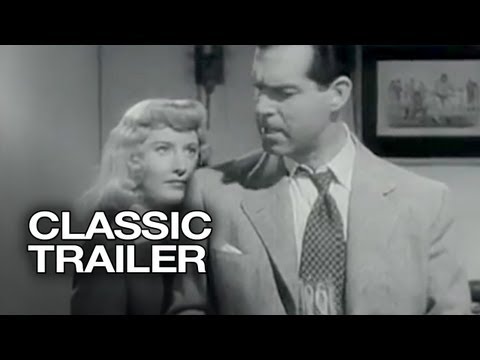