Actor Richard Ney tried to warn us about the shortfalls of stock short-selling when he abandoned a 25 year Hollywood career to become a best-selling author of books critical of Wall Street obfuscation and greed.

Ney made his screen debut as the son of Greer Garson in William Wyler’s 1942 wartime drama Mrs. Miniver, which garnered six Academy Awards including Best Picture and Best Actress (Garson). In 1943, Ney married Garson, despite being at least ten years her junior. Their troubled marriage lasted until they divorced in 1947. The high esteem American filmgoers held for screen icon Garson, combined with the negative publicity surrounding their stormy divorce, put a damper on Ney’s hopes for a successful career in movies. (Great thanks to Jeff Carrier at CinemaStarPhotos for providing the photo of Richard Ney and Greer Garson).

Despite a handful of good performances in films like The Late George Apley (1947), Ivy (1947) Joan of Arc (1948), The Fan (1949) and several lesser films, Ney found himself relegated to featured roles in trivial films like Babes in Bagdad (1952), a horrid Arabian Nights rip-off which co-starred Gypsy Rose Lee, and The Premature Burial (1962) from B-movie king Roger Corman.

Like other fading film actors, Ney accepted roles in 1950s television shows such as Studio One, Kraft Television Theater, General Electric Theater, The Millionaire, Peter Gunn and Have Gun, Will Travel.

In the early 1960s, Ney began transitioning out of the film and TV entertainment business and into something else altogether. With an economics and public finance degree from Columbia University in New York, he opted to move into the financial world. But instead of just being a financial consultant or market advisor, Ney started writing about Wall Street, achieving national notoriety for accurately predicting the 1962 stock market crash.

In 1965, Ney was interviewed by The New York Times, and was quoted as saying that the stock market system was composed of “incredible mechanisms for legalized larceny.” He went on to say, “The average investor in the market is a blind man crossing the street. He can’t compete with professionals.” 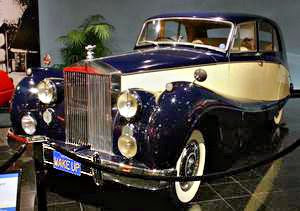 In spite of his fervent criticism of Wall Street, Ney was always an avowed capitalist and drove a Rolls-Royce with WAKE UP displayed on the license plates. A frequently circulated quote attributed to Ney is: “Money is the sixth sense that makes it possible to enjoy the other five.”

In 1970 Ney started writing books about Wall Street. His first was titled “The Wall Street Jungle.” It described in clinical detail how the stock market really worked, particularly on the inside. The financial establishment did not welcome Ney’s analyses.

His second book, published in 1974, was “The Wall Street Gang,” another expose that peered even more mercilessly into the inner workings of Wall Street and the impact and manipulations of its “specialists” and “market makers.”

The New York Times reportedly refused to review Ney’s books, and a number of sources claim he was one of only two people banned from appearing on The Tonight Show with Johnny Carson. (Ralph Nader was was supposedly the other ) However, upon the release of “The Wall Street Jungle,” a Los Angeles Times columnist praised Ney’s writing as “lean, lucid, delivered with the zeal and pungency of a born muckraker.”

In 1975 Ney published his third book with the longish title “Making it in the Market: Richard Ney’s Low-Risk System for Stock Market Investors.” Ney also published an investment newsletter from 1976 to 1999 titled “The Ney Report.”All of his books are now out of print, although a quick perusal at Amazon.com found they’re all available used, from next-to-nothing to prices nearing $200 for collectibles.

Ney died in 2004. Inevitably his film career and marriage to Greer Garson were the first items mentioned in his obituaries. But his later career was not forgotten. In the Washington Post obit, Ney was quoted as saying, “Hidden behind the facade of pompous jargon and noble affections, there is more sheer larceny per square foot on the floor of the New York Stock Exchange than any place else in the world.” Strong words indeed.

Given what’s been happening on Wall Street in recent years, one wonders whether, if he were still alive today, Richard Ney would be justified in winking from behind the wheel of his Rolls-Royce and saying, “I told you so.”

Here you can enjoy the MGM theatrical trailer for Mrs. Miniver:

Bob Campbell was co-creator and producer of the original PBS series Matinee at the Bijou. He is currently working to bring back the series in a sequel to be hosted by the magnificent Debbie Reynolds.