“A Romantic Round the World Manhunt!”

Three airline hostesses jet-set across Europe searching for handsome rich men to marry in the engaging 1963 MGM romantic comedy Come Fly With Me. Like How to Marry a Millionaire, all three women find themselves attached to men who are very much different than what they had in mind but they nevertheless have fun hunting and the audience has fun watching them on the prowl.

Dolores Hart stars as pretty Donna Stuart, a cynical girl who has her heart set on wearing sable. She meets the dashing Baron Franz von Elzingen (Karl Boehm) and believes she found her Prince Charming….until she realizes that he is using her to smuggle stolen diamonds between Paris and Vienna.

Carol Brewster (Pamela Tiffin) is more sensible and sets her eyes on the pilot (Hugh O’Brian). She thinks he is her knight in shining armor until she discovers he is having an affair with a married woman (Dawn Addams).

It’s the lovely Hilda Bergstrom (Lois Nettleton) who ends up with the cream of the crop: Texas millionaire Walter Lucas (Karl Malden). She’s a thrifty girl who wants her man to be saving his pennies as well, little does she know that he has $40 million dollars to spare. Like most good comedies of the 1960s, the film ends with each of the girls happy with their romantic choices. 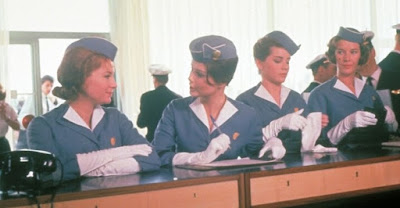 Come Fly With Me is light-hearted entertainment that will take you back to an era when jet travel was oh-so-glamorous ( and when airlines gave you room to stretch your legs ). The script seems like it was penned directly for the film but it was actually based on a chick-lit novel called “Girl on a Wing” by Bernard Glemser. The working title was The Friendliest Girls in the World but was later changed to Come Fly With Me to capitalize on the popularity of the Frank Sinatra hit. In the opening of the film, the song is swingingly rendered by Frankie Avalon.

Director Henry Levin keeps the pace of the film moving swiftly and the location scenery throughout Paris and Vienna is beautifully filmed by cinematographer Oswald Morris (Moby Dick, Scrooge). Interiors were shot at the Metro-Goldwyn-Mayer Studios in Boreham Wood, England. 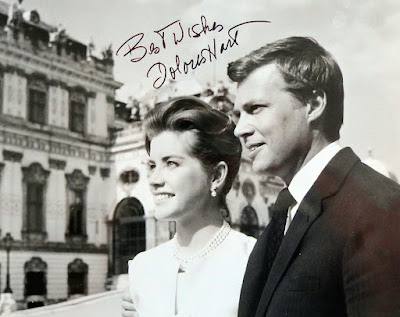 The movie is notable for being Dolores Hart’s final picture before she retired from acting and entered the Abbey of Regina Laudis. She looks particularly beautiful in this film and gives a wonderful farewell performance. Lois Nettleton also gives a good performance as the level-headed “Bergie” and Karl Malden is excellent as usual. Richard Wattis, James Dobson and Lois Maxwell, who was filming Dr. No in England that same year, are also in the cast.