Just what is a “comfort film”? Is it a film you turn to for merriment? Is it a film that allows you to cry freely, or is it a film that brings to mind old and cherished memories? For as many definitions as there are of the word comfort, there are films that will fill that need, but thankfully, we are limited to only five choices for this post!

There are a LOT of films that I find emotionally satisfying but this one really fills a need. I haven’t figured out yet just what that “need” is, but I feel so happy and sooo comfortable when I get to sit back with a cup of tea and enjoy The Chalk Garden. It is probably one of my most well-worn DVDs, and what I love about the disc is it’s one of those that loops around when the film ends, so I get to enjoy the opening credits (and Sir Malcolm Arnold‘s lush score) all over again right after the film ends.

Enid Bagnold’s play is rich with hidden meaning and crisp biting dialogue. On the surface, it is a story about a young teenager (Hayley Mills) who attempts to delve into her new governess’ mysterious past and expose her secrets so that her grandmother (Edith Evans) can fire her. “Everyone has something in their past. Some dark and terrible secret,” she explains. Along with the butler Maitland (John Mills), she relishes crime stories, so this is quite a fun challenge for her, but the latest governess proves to be quite a hard nut to crack. That is the plot on the surface, but beneath it, Bagnold touches on so many different facets of life, sharing wisdom about honesty, trust, relationships, independence, and love. We all have our own chalk gardens that we are not tending to.

The cat-and-mouse aspect of the film is also strangely satisfying. With the first viewing, you are anxious to see whether Miss Madrigal will expose Laurel’s deep secrets before her own are exposed, but with subsequent viewings, it is more entertaining to watch the relationship that develops between these “beloved enemies.” Laurel later discovers that her perceived enemy turns out to be her dearest friend…another valuable life lesson that many of us learn in time.

If you like this one then you’d also enjoy Marnie, another psychological thriller. This one is from the master of suspense – Alfred Hitchcock. I’m a nut for real thought-provoking dramas.

Read my full review of The Chalk Garden here.

On some days you just want to sit back and enjoy a rainy day with an old friend, and what better old friend than Miss Marple? I’m referring to the Margaret Rutherford mysteries, of course. Agatha Christie fans can argue till their face is blue that Rutherford was nothing at all like the Miss Marple of the novels, but I love her for precisely that reason – she made the character uniquely her own.

There were four Miss Marple films made between 1961-1965, all staring the indomitable Ms. Rutherford and her husband Stringer Davis. Murder She Said (1961) launched the series and remains one of the best, but all the others are entertaining in their own way. Murder at the Gallop (1963) takes place at a riding establishment, Murder Ahoy (1964) on a ship, and Murder Most Foul (1965) in a theater. 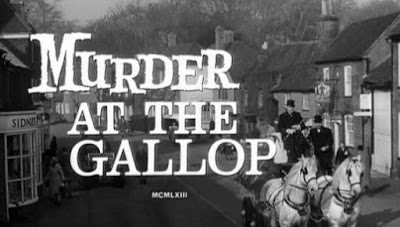 Ron Goodwin‘s catchy theme music puts a smile on my face every time and, if it’s an especially rainy morning, these are great films to play on the tele while you take forty winks.

Read my full review of the Miss Marple Mysteries here.

We all need our occasional dose of romantic mush. The Ghost and Mrs. Muir is wonderful because it isn’t your usual love story – it is about a widow (Gene Tierney) who falls in love with the ghost of a sea captain (Rex Harrison) in a coastal town in England in the 1900s. The film is beautifully filmed, atmospheric, has a great Bernard Herrmann score, and what I like best about it is the setting :Whitecliff by the Sea. The movie was actually filmed in Monterey, California, but it seems so quintessentially British. 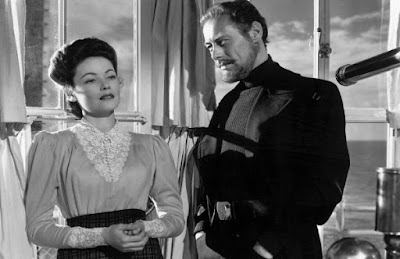 If you like this one, too, then you have to check out The Loves of Joanna Godden, a British film which was released the same year and is also set in 1900s England. My sister and I only recently discovered this Edwardian gem and it has already been viewed six times over. Like The Ghost and Mrs. Muir, it spans time in segments and features an independent single woman as its main character. It is quickly becoming our new comfort film favorite.

Read my full review of The Ghost and Mrs. Muir here.

Another form of comfort that movies provide is distraction. When that beef stew unsettles your tummy, then it’s nice to crawl into bed and let it grumble aloud while you watch a colorful film that takes your mind off of your stomach…and Blue Hawaii is just what the doctor ordered. It was filmed on location in beautiful blue Hawaii at the height of the tourist season and is packed with music, good humor, a bevy of bathing beauties, and the “King of Rock ‘n Roll” himself, Elvis Presley. This film has long been my bedside remedy for any kind of ailment and it never fails to provide a good dose of comfort.

The Trouble with Angels (1966) – Soul-satisfying comfort 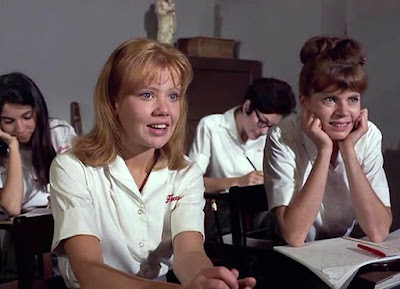 Lastly, and most importantly, we all need a little soul nourishment. The Trouble with Angels always brings a smile to my heart and my soul. Hayley Mills and June Harding play two mischievous school girls who are forced to attend an all-girls Catholic school in Pennslyvania. The school is run by the stern-faced (but warm-hearted) Mother Superior played by Rosalind Russell.

The film spans all four years in the girl’s school life and, in wonderful little vignettes, reveals their comedic escapades throughout the terms. This would make it just a great comedy but what adds depth to the film is the drama as Hayley Mills comes to understand Mother Superior and decides for herself that she wants a relationship with God more than anything else.

After countless viewings, I’m always discovering subtle touches in the story, the filming, and especially the acting. It always makes me cry and wonder anew at how beautiful life is. This was the last film that Ida Lupino directed and certainly her best. Sadly, actress June Harding passed away just a few months ago.

Read my full review of The Trouble with Angels here.