“Entreat me not to leave thee or to return from following after thee, for whither thou goest, I will go and where thou lodgest, I will lodge. Thy people shall be my people, and thy God, my God.” 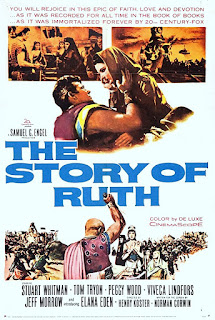 These are some of the most famous lines in all of the Old Testament and they were uttered by Ruth, the young Moabitess, to her mother-in-law Naomi after the death of Ruth’s husband. Naomi planned to return to her native land of Bethlehem and Ruth begged her to let her follow. The Book of Ruth is one of the shortest books in the Old Testament, yet it features one of the most memorable stories in the Bible – that of Ruth and the events that led to her marriage to the rich man Boaz. Ruth eventually became the great-grandmother of King David.

Norman Corwin (Lust for Life), a radio dramatist, took this little book and reworked it into a 132-minute screenplay for an epic film adaptation of the story. With such a bare framework to begin with, Corwin took some imaginative liberties with the characters to create an entertaining story.

Ruth, the widow of Mahlon, is given a detailed backstory that shows her being raised to serve as a high priestess in the temple of the Moabite deity Chemosh. One of her duties as a priestess is to prepare young girls for sacrifice to Chemosh. One day, Ruth meets the handsome Mahlon (Tom Tryon), a goldsmith, who tells her of a different god, an invisible God who tells his people “Thou shalt not kill”. She begins to doubt Chemosh and the sacrificial practice and eventually runs away to marry Mahlon. Alas, he is killed and left on her own, she decides to return to Bethlehem with her mother-in-law Naomi.

The first half of The Story of Ruth does not play out like the religious epic you would expect and seems more like an Italian sword-and-sandal film. However, once Ruth and Naomi embark on their journey to Bethlehem, Ruth develops a closer relationship with God and the film takes a more religious tone. This contrast between the first half and the second half of the film is so different that it seems like you are watching two different films, which actually emphasizes how markedly different Ruth’s life was as a Moabitess and as a Jew. In the Book of Ruth, Mahlon, his brother, and father all perish for an unknown reason (probably famine), but Corwin chose to make Ruth the cause of all of their deaths, possibly to make her conversion to Judaism more dramatically effective.

Our leading man, Stuart Whitman, makes his first appearance as Boaz when Naomi and Ruth arrive in Bethlehem. At first, Ruth thinks he is heartless but then she grows to love him as she witnesses the kindness he hides beneath his crusty demeanor. Stephen Boyd was initially cast as Boaz but turned down the role….perhaps he didn’t want to be typecast in religious films after his recent success in Ben-Hur. Boyd may have added more prestige to the film, but Whitman was an ideal substitute. The following year he went on to make another religious film, Francis of Assisi.

Elana Eden, a lovely 19-year-old actress from Palestine, was given the title role after producer Samuel Engel recalled her screen test for The Diary of Anne Frank and selected her. Millie Perkins, Susan Strasberg, Tina Louise and Diane Baker also tested for the part, but, as Engel announced in the preview of the film, “Elana Eden comes to us from the Holy Land following a worldwide search in which literally over a score of young, talented actresses were tested. Elana is a graduate from the renowned Habima Theatre. She was chosen by us because we feel she possesses the necessary qualifications for this exacting role and because of her natural qualities, which most faithfully exemplify this beloved biblical heroine.”

She was indeed a perfect choice for the role. Like Haya Harareet in Ben-Hur ( 1959 ), she exuded a gracefulness that was beyond her years and was able to convey so much emotion through subtle facial expressions.

Peggy Wood (The Sound of Music), who was cast as Naomi, also does a good job but it would have been pleasant to see Irene Dunne, who was offered the part, in this role instead. Also in the cast was Jeff Morrow (as Tob), John Banner, Thayer David, Viveca Lindfors, Basil Ruysdael, Eduard Franz and Leo Fuchs.

“It must have been God’s goodness that brought me to your field that day. Perhaps He’s been directing me to you all my life.” – Ruth

The Story of Ruth is not as famous as other religious films of the 1950s and 1960s, but it is a lovely film to watch and very entertaining. Franz Waxman penned a sweeping score to the picture and it features excellent set designs by Lyle Wheeler and beautiful cinematography by Arthur Arling (Gone With the Wind)…in Cinemascope, of course.