Nothing, absolutely nothing could prepare you for the bizarre turn that Dick van Dyke and the cast pulled for this second season entry in The Dick van Dyke Show.  Up until then the show had followed a typical 60’s sitcom format of the day, delving into the home life and work life of it’s star, Rob Petrie (van Dyke), as he dealt with troubles and misunderstandings in his daily routine.

Van Dyke costarred with Mary Tyler Moore as his wife, Laura, and Morey Amsterdam and Rose Marie (as Buddy and Sally), who were his co-writers on a variety show,”The Alan Brady Show”. A typical episode might include Laura getting jealous of Rob because he has to spend a lot of time with a beautiful guest star on the TV show he writes for, or a ne’er-do-well brother of Buddy showing up and hustling Rob in a game of pool.

But in the middle of the second season, which was during they heyday of another hit show The Twilight Zone, a script came across the desk of the producer, Sheldon Leonard, that turned the van Dyke show on it’s ear.  Although Leonard initially didn’t like the concept and thought it wasn’t all that funny, he gave the go ahead to film it, later admitting he was wrong about his initial reaction.

The show is basically a Zone parody.  And just to home in that concept, the aliens come from a planet called “Twilo”.  The bizarre nature of the episode makes it stand out among the rest of the shows oeuvre. 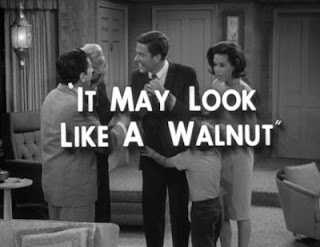 The show opens with Rob and Laura in bed.  Rob is watching a horror movie on late night TV. (Late night? The clock on the nightstand reads only 9:00). Laura keeps whining to Rob to turn it off as she is frightened. 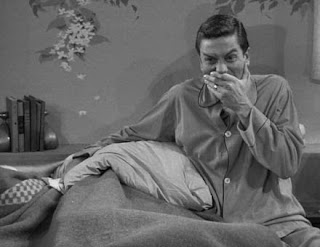 Sadistic Rob not only insists on watching it to the end, but he insists on torturing Laura by describing in detail what went on in the movie, despite her objections. And scaring the hell out of her.

To wit: It seems that aliens from the planet Twilo are trying to invade the Earth. These aliens have an affinity for walnuts and are distinguished from humans by the fact that they have no thumbs. And they have four eyes, two in the back of their head.  And the leader of the Twilo invasion, Kolak, has an uncanny resemblance to Danny Thomas — who was a very popular TV show host and actor of the day. 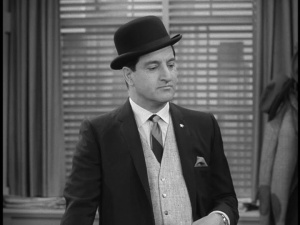 Additionally there are these strange walnuts which, when cracked open, reveal not a nut, but some weird glowing thing that causes the human who opened it to transform from a human to an alien from Twilo, complete with missing thumbs and extra eyes.

The next day finds Rob waking up to walnuts scattered all over the place and Laura acting like nothing is peculiar.  Rob is convinced that Laura is setting him up for an elaborate practical joke which includes hints that Kolak was not just a character he saw in a late night film but a real person. 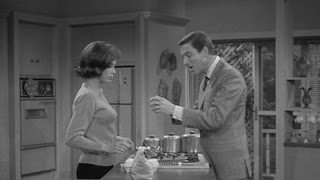 Laughing it off, Rob heads to the office and tries to tell Sally and Buddy about his troubles that morning with Laura.  But apparently, at least to Rob, Laura has convinced his co-workers to join in on the gag.  Both swear that they know Kolak is real, and they apparently have been transformed into aliens themselves.  This even includes Mel (Richard Deacon), the boss of the three.  They even tell Rob that the guest star for the week’s show is none other than Danny Thomas 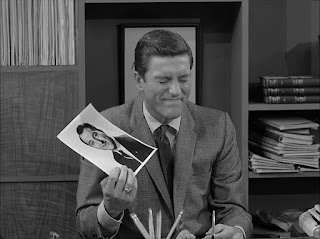 After Buddy and Sally leave, who appears but Kolak himself (or maybe it’s Danny Thomas trying to convince Rob that he is Kolak…)  As Rob descends further into madness, he becomes convinced that all this is a dream, but attempts to force himself to wake up from the nightmare are fruitless.

Rob goes home where this madness continues as he finds Laura in the living room closet with a mound of walnuts.  And she and the rest of his friends (and Danny Thomas) closing in on him, sans thumbs and the extra eyes. 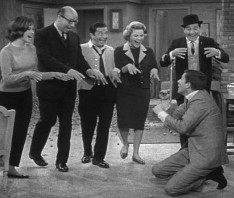 Of course, it won’t come as a surprise that it all is a dream.  (Geez, hope that wasn’t a spoiler).  Rob wakes up and then wakes Laura to tell her about his weird dream.  It turns out that due to Rob’s shenanigans with relating the movie to her that Laura too had been in a nightmare.  They decide they are too scared to go back to sleep so the turn on the TV. Only to find that the late late movie is

“THE WEREWOLF FROM OUTER SPACE!!!!”

(Guess who’s not getting any more sleep tonight…)

Dick van Dyke himself ranks this episode as one of his top five favorites of the series’ run.  It also ranks in TV Guide’s list as one of the best TV show episodes of all time.