Some say that you could judge a man by the books he reads. Well, you could also say that one could judge a woman by the house she keeps. Her nesting instincts make a house one of the most important aspects of her life, and they reveal – by their architectural style and decor – the type of house that the woman finds most comfortable. A house, in many ways, suits the homeowner’s personality… that is, if it is one’s ideal home. Since Hollywood stars could afford just about any home that they wanted, and in any location, you can pretty much be assured that they only bought (or built) what they wanted.

As an example, let’s take a look at Barbara Stanwyck, one of the most beloved actresses of the golden era, and the various houses that this lady called “home” :

Barbara arrived in Hollywood in 1929 with her husband Frank Fay, a vaudevillian. Roles in such films as Shopworn (1932), Baby Face (1933), Annie Oakley (1935) and Stella Dallas (1937) quickly made Stanwyck one of the most popular actresses in tinsel-town. During Barbara’s rise up the ladder of success, she and Fay had been renting a house at 707 North Arden Drive in Beverly Hills. After her divorce to Fay in 1935 she moved to a small house with English gardens at 615 North Bedford Drive right across from Zeppo Marx, her close friend and manager, and his wife Marion.

In the mid-1930s, Stanwyck purchased an 11-acre ranch in Northridge, California (the Van Nueys district). At the time the US post office listed only 40 names as residents, the area was so sparse. There was no place to buy groceries either, so residents had to venture to San Fernando and Beverly Hills to shop. Zeppo Marx bought 87 acres adjoining her property and – since they shared a passion for horses and racing – combined their lands to create an 100-acre thoroughbred ranch called “Marwyck”.

Robert Finkelhor, a young architect who had designed Harpo Marx‘s residence in 1936, was hired by Stanwyck and Zeppo Marx to design their homes. Finkelhor created a sprawling French and English Tudor inspired home with three bedrooms, a trophy room, seven bathrooms, two servant’s rooms, and a three-car garage. The backyard included a large swimming pool, stables for the horses, and a tennis court. 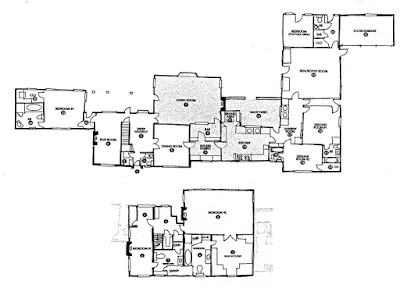 “If you happened to drop in at the ranch, you wouldn’t feel comfortable unless you dressed to romp with the dogs, go riding in the hills, or walking through the alfalfa,” reported a 1939 press release about Marwyck.

Marwyck’s stables were kept full as a horse-breeding and boarding ranch. Each year there were 15-20 horses that called Marwyck their home. In season, these horses would be out racing at Bay Meadow and other tracks across America. As for breeding…in one year alone, 72 mares were bred at the ranch. A six-furlong racing track allowed the yearlings that they bred to be trained at a young age. Stanwyck and Zeppo Marx were not directly involved with the racing or breeding, but let manager Harry S. Hart handle this aspect. 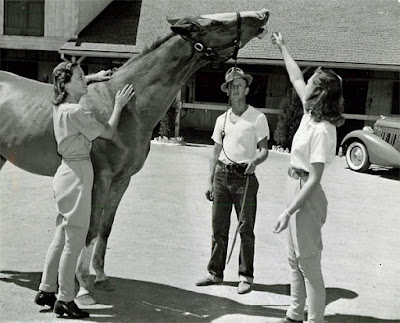 When Barbara Stanwyck (or “Missy” as friends called her) wed Robert Taylor in 1939, they lived on the ranch together and he helped run the farm and train the horses. Taylor was a great rider and enjoyed being on the ranch.

Since they often were in Hollywood making pictures, they also purchased a house at 273 South Beverly Glen Boulevard in Westwood (valued today at over $5 million) This 5,900 square foot home featured cross-beam wood ceilings and arched doorways. It had six bedrooms and five bathrooms and was located just off of West Sunset Boulevard. 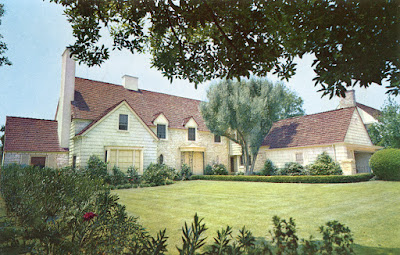 In 1950, they sold Marwyck to actor Jack Oakie, who named the ranch Northridge Farms. After Stanwyck and Taylor divorced in 1952, she spent most of her time at this house until she eventually moved to a French inspired home seen on the front of this picture postcard. We weren’t able to determine the address for this residence but it is possibly 1017 North Beverly Drive in Los Angeles. 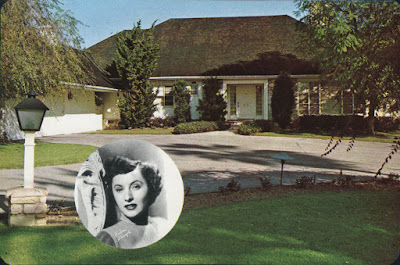 Robert Taylor loved the ranch life that he was accustomed to and in 1950 built a fabulous seven bedroom estate on over 110 acres in Mandeville Canyon. Today, this property is one of the most expensive parcels of real estate in Hollywood.

Barbara Stanwyck eventually downsized to a three-bedroom, 3000 square foot home, built in 1958 at 1055 Loma Vista Drive in Beverly Hills, were she remained until her death in 1990 at the age of 82.

Constance Metzinger runs the website Silver Scenes, “a blog for classic film lovers.” This article originally ran earlier this year as is being reprinted as part of our ongoing tenth anniversary celebrations.