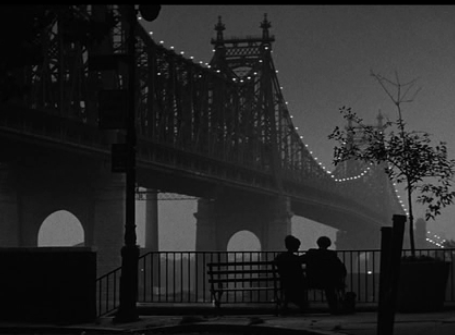 ost of my adult life, I’ve listed Manhattan as possibly my favorite Woody Allen film. It made that much of an impression when I saw it in 1980. Hence, I was enthused about a recent opportunity to view it again. But now having seen it after 34 years, I am stunned that I ever thought so highly of it. It is not a dreadful film, but neither is it a very good one.

Allen plays Isaac, a 42-year-old New York City television writer who aspires to write the Great American Novel. Like most Allen characters, he is flush with insecurities about his talent (he abruptly quits his job) and the opposite sex (an ex-wife leaves him for a woman). His girlfriend, Tracy (Mariel Hemingway), is a 17-year-old high school student. His best friend Yale (Michael Murphy) is a pseudo-intellectual snob who is cheating on his wife. Yale’s mistress Mary (Diane Keaton) initially irritates Isaac, but–as both characters search for something missing in their lives–he finds himself falling for her.

Manhattan is often described as a bookend to Annie Hall, with the general perception that both films were inspired by the real-life romance between Allen and Keaton. By the time the two stars made Manhattan, they had broken up. Their friendship remained intact, though, and perhaps their natural byplay is what attracted me to Manhattan. Keaton remains the perfect Ying to Allen’s Yang. Their scenes seem real, but it’s when they’re apart that the film falls apart.

Individually, it’s hard to root for these people. Isaac is sometimes amusing, but he’s also incredibly selfish. He dumps Tracy when he thinks he loves Mary. When that doesn’t work out, he wants Tracy to forget her dreams and take him back. Mary rejects Yale because he doesn’t have time for her. Later, she dumps Isaac because she thinks she still loves Yale. Enough already! Those characters come across as confused, self-centered intellectuals with few redeeming qualities (well, we do see Isaac in one scene with his son).

The most appealing character is Tracy, who, despite her youth, displays more maturity than any of the principals. Yet, it’s sad to watch her waste her life with Isaac–even if he does educate her on classic cinema. She seems to have lost her zest for life at an early age.

Frankly, I also find their relationship disturbing, for Isaac is clearly having sex with a teenager. Of course, there are now obvious parallels to Woody’s real life marriage to Soon-Yi Previn, who was allegedly a slightly older 19, when she and the 56-year-old Allen began their relationship. (For the record, Allen also allegedly had a fling in the late 1970s with 17-year-old actress Stacey Nelkin, who served as the basis for Tracy).
The cast standouts are Mariel Hemingway as Tracy and Meryl Streep as one of Allen’s ex-wives. Hemingway received an Oscar nomination for Best Supporting Actress, but lost the award to Streep, who won for Kramer vs. Kramer.
In retrospect, Manhattan works best as an ode to the city. Lovingly captured in black and white by cinematographer Gordon Willis, the city comes to life–the skyscraper landscapes, the neon signs, the historic landmarks. Willis captures all of these breathtaking imagines with a gray pallette that somehow transforms Manhattan into a magical place. Amazingly, Willis did not even receive an Oscar nomination for his work. In fact, Willis never won an Academy Award, though he was given an honorary one in 2010 for “unsurpassed mastery of light, shadow, color, and motion.” Three of those four elements are wonderfully on display in Manhattan.
I realize that my revised assessment of Manhattan contradicts the one held by most critics and film buffs. I don’t mind being in the minority and, if you disagree adamantly, please leave a comment below. What I found most interesting, as I reflected on this film again, is that I rarely change my mind about a movie I’ve seen. And when I do, it’s almost always a case of increasing admiration. That makes Manhattan a rarity–and, for me, not in a good way.