“I was a boy when I entered Mr. Rodock’s valley but when I left I wasn’t a boy anymore. I had picked up a few pointers about how men died quickly and how they kept from dying quickly; how to be cruel and how not to be cruel; and what love isn’t, and what it is.”

Steve Miller (Don Dubbins), a Pennsylvania grocery boy, is heading west to carve out a new life for himself when he ventures into a Colorado valley in 1875 and rescues a horse rancher who was ambushed. This man is Jeremy Rodock (James Cagney), who not only owns the valley but all of the horses in it.

In gratitude for saving his life, he takes Steve to his ranch and offers him a job as a wrangler. It is here, in Rodock’s valley, that Steve grows into manhood, learning new skills, falling in love for the first time, and witnessing torture and the hanging of a man.

Tribute to a Bad Man(1956) is an underrated western that has been passed by many a stagecoach over the years. It was based on the short story “Hanging’s for the Lucky” by Jack Schaefer, an excellent western author who is most famous for penning the novel “Shane” in 1949.

Spencer Tracy was initially cast in the role of Rodock but balked at working on a set built at such a high altitude (it was filmed on location in Montrose, Colorado) and generally proved to be such a nuisance to the director and cast that MGM fired him four days after shooting began. James Cagney was called away from his beloved Martha’s Vineyard as a replacement and – as director Robert Wise recalls – “couldn’t have been any more different in terms of attitude than Tracy…taking Don Dubbins under his wing and was very helpful to Irene Papas.” 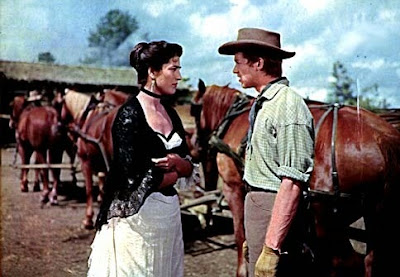 Cagney had made only two westerns prior to this invitation but the genre, and this particular role, was a glove-fit for him. It is a tribute to Cagney’s versatility as an actor that he was able to perform such a diverse array of characters throughout his career. He truly becomes Rodock and infuses the character with a tenderness under his crusty exterior that I doubt Tracy could have brought to the part.

In spite of his bursts of cruelty, Rodock is never an unlikable figure. Jeremy is not really a “bad man” as the title implies. Cagney shows us that his goodness is always just beneath the surface. He is a fearful man; and in his acts of fear he has gained a reputation for being merciless, but as he puts it,

“We’re living in the middle of nowhere. Two hundred miles from any kind of law and order, except for what I built myself. Ever since I started – and this you don’t know – I’ve been badgered, skunked, bitten out and bushwhacked by thieves from everywhere. And now, one of my men’s been killed. I find my horses, I find the killer. If I find the killer, I hang him.”

Rodock is constantly bothered by horse thieves. Most of them are in league with his old partner Peterson ( James Bell ) who lives nearby with his wife (Jeanette Nolan) and son Lars (Vic Morrow). Peterson failed at ranching and, despising Rodock’s determination and success, steals his plentiful horses.

When injustice is done in his land, Rodock makes the men who threaten his territory pay the price of death – a death by hanging. But this act of vengeance costs the range baron dearly. “Hanging fever” could take hold of a man’s soul and corrupt him for life.

“If you’d only see what it does to you, Jeremy. It changes you.”

Rodock is also threatened by his foreman McNulty (Stephen McNally) who has eyes for Jocasta “Jo” Constantine (Irene Papas) a young Greek immigrant whom Rodock rescued from a Cheyenne bawdy house where she was playing the piano. They have a living arrangement and a relationship agreement….. “I’m here as long as you’ll have me.”

Jo has no desire to leave Jeremy but in spite of her affirmations, he feels insecure and worried that she will desert him for any young man that wanders into the ranch…including Steve.

Jeremy wants to have something or someone belong to him, fully. “A man oughta be able to have somethin’, and believe he’s got it. That it’s his, that he ain’t gonna lose it ever!” He lives in constant fear of knowing a rustler may take away his horses or that Jo will leave him. Rodock has relied on himself and his own instincts for so long that he is slow to trust. But “how can you invest your heart in someone if you don’t trust”, Jo asks. 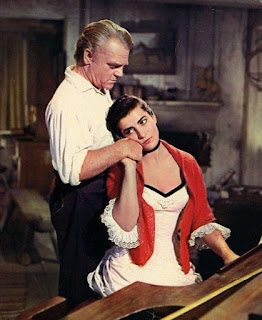 Tribute to a Bad Man is not your traditional western because the story of the horse thieves and Rodock’s thirst for justice are merely side plots to the true focus of the film – Rodock’s inner desire for security. He clearly wants to tear down his personal barriers when he is with Jo but that nagging insecurity holds him back. Little does he realize how much Jo loves him. This romantic angle to the story is what makes it so endearing to me.

Western films have long had a tradition of featuring gentle romances, a slow blossoming of love between a hardened cowboy and a soft-spoken schoolteacher or minister’s daughter. There is no sudden fierce outburst of emotion. There are no long courtship sequences. There is just an understanding look, a glance of sympathy, a touch of the hand. Robert Wise quickly establishes to the audience that Jeremy and Jo are in love with each other but he adds anticipation to the story by letting us witness the characters discover this for themselves.

Irene Papas, a beautiful actress with striking classical Greek features, gives a strong performance in her Hollywood debut. Jocasta is an independent woman, an ex-saloon entertainer who likes to sass back at men, but Papas lends her character old-world understanding and soulfulness that makes her so very appealing. 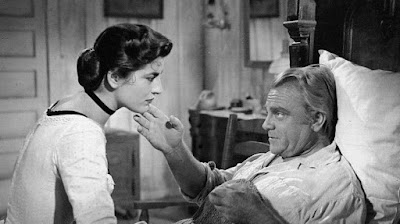 All-around the casting was excellent. Don Dubbins gives a wonderful performance as the gentle young Steve. James Cagney took such a liking to the lad that he was featured in Cagney’s next picture, These Wilder Years (1956). McNally and Morrow are good as the bitter villains who would clearly like to shoot Rodock in the back, and a gathering of familiar western character actors were also rounded-up for support: Lee Van Cleef, Royal Dano, Chubby Johnson and James Griffith.

“Maybe I ain’t hard, maybe that’s why. But Mr. Rodock, you didn’t have to hang him.”

Tribute to a Bad Man was filmed in Cinemascope by cinematographer Robert Surtees who beautifully captured the magnificence of the Colorado landscape. The film also features an expressive score by Miklos Rozsa which was woven throughout with Greek-inspired motifs.

Robert Wise made only three westerns (the other two being Two Flags West and So Big) which leaves one to wonder how many fantastic westerns could have been added to the genre had he made them a focus of his career. Wise was such a professional director and Tribute to a Bad Man is evidence of the sure-hand that was holding on to the reins of the production. He structures the scenes in short sequences that play out naturally and are never overstuffed with emotion or action. The emphasis is always on visuals, which conveys the underlying message of the story so much more effectively. This is especially evident in the final sequence. In the hands of another director, this ending may have come off as schmaltzy, but instead it unfolds as one of the most satisfying – and beautifully photographed – conclusions to a western that I have ever watched.