I am a huge football fan.  That’s American Football to you readers in Europe. We call your “football” soccer here. I will watch a game between two second-tier college teams if I come across it on TV and there is no other football games more pressing to me.  The action is thrilling, the hits dynamic, and the scores are well worth the time I spend watching them.

My second favorite sport is basketball.  I love the energy that those players have to run up and down the court, and the game can change at any moment.  Especially interesting is the playoffs, both in college (known as the “March Madness”) and in professional basketball.  Like football, on any given day a team can have a streak going for them and defeat a much better team, so you never really can be sure who will win.

Third on my list is hockey.  The speed of hockey is what draws me more than anything, and a 1-0 final score is a really great defensive game.  Scoring can be higher, especially if the goalies are having an off day.

At a distant fourth is baseball.  At least with the other three sports you have a lot of action and there is some sense of when it is going to end.  Baseball never ends in a tie, however.  I saw one playoff game between my beloved Houston Astros against the rival Atlanta Braves which went 18 innings and lasted almost six hours.  (The longest game in Major League Baseball,  by the way, went 25 innings and lasted a whopping eight hours).

Baseball itself can be interesting, to a point, but there is waaaaaaaaaay too much down time between the action.  There’s a reason why they call the break in the seventh inning “the Seventh Inning Stretch.”  If you’ve been sitting down through that many innings you probably need the chance to get up or your legs might atrophy…

“So, Quiggy,” you might ask, “why is your favorite sports movie about the sport of baseball?  Why didn’t you pick The Longest Yard (which has some of the best football action in any football movie)? Why not Hoosiers (which is a damn good basketball film)?  Or even Slap Shot or Miracle (both of which give us some beautiful hockey action)? Or any others you might have come up with that don’t involve baseball…”

Some of it has to do with my love of history. Eight Men Out beautifully captures the spirit of the times, even if it’s focus is on one of the more disreputable events of the early 20th century.  And if you want to delve into the scandal I highly recommend the book on which the movie was based, Eight Men Out by Eliot Asinof. 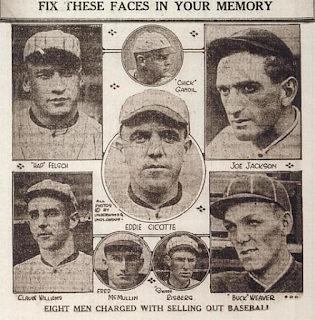 But the second is that it has a collection of some of the greatest character actors of the time. Some of them may have escaped your notice, and in fact when I tell people about this movie, most who are not as avid movie watchers as I am will say “who?” when I mention almost any other name besides John Cusack or Charlie Sheen.

But just look at the some of the names.  David Strathairn plays Eddie Cicotte.  I fist latched on to Strathairn when he appeared in the Robert Redford vehicle Sneakers where he played a blind computer hacker (and did it so well I actually thought the actor was blind until I saw him in this movie, which actually preceded Sneakers but I didn’t watch until after that movie).

Clifton James plays the White Sox Owner Charles Comiskey.  James is memorable as one of only two characters played by the same actor in multiple James Bond movies.  (He plays Sgt J. W. Pepper in Live and Let Die and The Man with the Golden Gun).

Michael Rooker plays Chick Gandil.  Rooker came to prominence as the titular character in Henry: Portrait of a Serial Killer and also appeared prominently in Mississippi Burning and as Yondu in the recent Guardians of the Galaxy films.

John Mahoney is familiar to many as the father on the TV show Frasier. Kevin Tighe was one of the paramedics on the 70’s TV show Emergency! And Michael C. Lerner who plays gambling bigwig Arnold Rothstein was a runner-up for the Academy Award for Best Supporting Actor for his role in Barton Fink.

Other names you might or might not recognize include John Anderson, D. B. Sweeney and Studs Terkel (who was not known as an actor, but was a prominent writer in his day.) 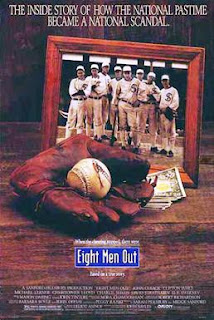 The 1919 Chicago White Sox are at the top of their game.  Not only do they easily win the American League pennant (before 1969 only the team with the best record advanced, there were no playoffs) and were almost assured of beating the crap out the National League champion, the Cincinnati Reds in their nine-game World Series.  (Note: For several years the best of seven games for the series was changed to nine, before reverting back to best of seven).

Charles Commiskey (Clifton James), portrayed as a cheap penny-pinching miser has engendered a lot of hatred by the players.  He refuses to give bonuses, pays the players a pittance compared to their counterparts on other teams, and even at one point pays the players a bonus in champagne (which is flat).  As such it easy to see how some players could fall victim to a plan to “fix” the Series.  Whether or not such players as “Chick” Gandil (Michael Rooker), “Swede” Risberg (Don Harvery) and Eddie Cicotte (David Strathairn) had any “legitimate” reasons for siding with the gamblers for what seemed better money, the fact of the matter was that the members of the team that conspired to throw the Series, something that although had not been done on such a grand level had been done in the past.  Albeit only for insignificant games during the season.

What happens is two separate coterie of gangsters try to convince a smattering of key players to throw the series.  Gandil is the mastermind of the fix on the players side, but he is at the whims of Bill Burns (Christopher Lloyd) and Billy Maharg (Richard Edson) in one corner and “Sport” Sullivan (Kevin Tighe) and Abe Attell (Michael Mantell) in the other.  Atell has close connections with bigwig Arnold Rothstein (Michael Lerner), but even Rothstein double crosses in this bait and switch atmosphere of big league gambling.

It should be no surprise that nobody can trust anybody else.  The players are promised one amount, but in the end they are only granted a pittance of the claimed payday.  The gamblers try to claim that much of the money is out on bets and that the players will eventually get paid after they have performed their duties.  Needless to say there is some backbiting among the players and at one point several of them decide to say screw it, let’s see if we can win.  But you know anything you know you can’t double-cross the gambling syndicate.

Eventually the result is exactly the way the gamblers wanted it.  But several reporters with long-noses try to sniff out the truth behind the White Sox collapse in the series.  These include Hugh Fullerton (Studs Terkel) and the famed sports writer Ring Lardner — played by director John Sayles, who, by the way, actually looks a lot like Ring Lardner.  I’m not sure if that’s fancy make up magic or he actually does resemble the writer.

After uncovering enough evidence, eight former players are brought to trial.  Included are the aforementioned Cicotte, Gandil and Risberg, as well as “Shoeless Joe” Jackson (D. B. Sweeney), “Happy” Felsch (Charlie Sheen), “Lefty” Williams (James Read), Fred McMullin (Perry Lang) and “Buck” Weaver (John Cusack)  What follows is what was the trial of the century (or at least the trial of the early part of the century since it was only 20 years old at the time). “Buck” Weaver for his part uses every opportunity to get himself separated from the rest since, although he knew about the fix, he refused to play anything but his best, as his record would show. But he is denied that right.  As a result he stands trial with the rest of them.

Meanwhile the owners hire a commissioner to clean up baseball. Judge Kenesaw Mountain Landis (John Anderson) establishes that he as commissioner must have absolute control over his position and that the position must be for life, in order to not have the position open to playing favorites.  His first act as the newly formed position of Baseball commissioner is to ban the eight “Black Sox” for life and establishing the ground rules about gambling that the same should happen to anyone else who has knowledge of illegal gambling activities.  (Thus setting the precedent that has thus far kept Pete Rose out of the Baseball Hall of Fame).

The baseball action in the movie is top notch.  Sayles could be given great credit to not only finding great actors, but ones who could pull off convincing baseball moves. Sweeney in particular looks good, mainly because he is by nature a right-hander, but practiced hard to convince people he was the left-handed Joe Jackson.