Barbara Stanwyck was, in my opinion, the quintessential strong woman of film. I never saw a movie where she portrayed a simpering female (unless it was to get her way, proving the “strong woman” status in the first place). Forty Guns is no exception.

Forty Guns is a western, but I also feel it has many attributes that would rank it also as a film noir. Which is not entirely a stretch, since both Stanwyck and the director Samuel Fuller have more than their fair share of film noir films under their belts. Fuller, for his part, was also the director of such classic film noir pieces as The Crimson Kimono, The Naked Kiss, Pickup on South Street and Underworld U.S.A. Of course Stanwyck made femme fatale history with such tiles as Jeopardy, The Strange Love of Martha Ivers, The File on Thelma Jordan, and Double Indemnity. 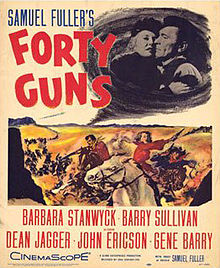 Three brothers ride into Tombstone.  Griff (Barry Sullivan), the older of the three is a former gunslinger, who has now taken on a job as sort of a bounty hunter, or more specifically as an agent for the federal government.  He arrives with Wes (Gene Barry) and Chico (Robert Dix), who are seconds in his quest.  He has a reputation that has proceeded him as a gunslinger, but he is now on the side of law and order.

Just outside of town a woman, Jessica Drummond (Barbara Stanwyck) storms past their wagon, followed by an army of men, the titular forty guns.  Apparently Jessica never goes anywhere without her huge escort.  It eventually becomes apparent she is some sort of big shot in the territory and there are hints given throughout the film that some of her dealings may be a bit shady.  For the life of me I couldn’t really figure out what it was, but maybe I’m dense.

Anyway, Jessica does have her own army of men and they include a man named Howard Swain (Chuck Roberson), a man whom Griff Bonnell has come to arrest for crimes committed elsewhere.  But before he can initiate his arrest he has to contend with a bunch of rowdies in town, led by Jessica’s little brother, Brockie (John Ericson).  He first has threatened the town’s marshal (Hank Worden) which he follows through by shooting the poor man in the leg, and then, with his gang, begins to tear up the town.  Until that is, Griff walks up to him and conks him on the head with his gun.

Jessica rides into town angry that her brother has been arrested, but also a bit peeved at her brother for causing problems.  Apparently his actions have threatened the security of whatever shady dealings she has been instigating.  When Griff shows up on the farm to arrest Swain, she and Griff have some words, but he goes away with his captive.  The sheriff of the town, Logan (Dean Jagger) talks with Swain, trying to persuade him not to betray Jessica (for whatever it is she is doing), but Swain says he knows things and will tell.  At which point someone shoots him in his jail cell, while the sheriff ignores it.  (See, even the sheriff is in on it. Whatever it is).

Meanwhile Brockie has it in for Griff.  Which doesn’t bode well for Griff’s relationship with Jessica, which against all odds is developing into a love.  But he still has to find out who killed Swain and all evidence seems to point to Brockie.  Brockie is the quintessential bad seed of the family.  And it turns out that Jessica raised him since her mother died giving birth to her brother.

The other two brothers do have some impact in the film, they aren’t just window dressing.  Wes is Griff’s right hand man, essentially his backup to make sure that brother Griff isn’t ambushed in his dealings, both as a former gunfighter and now as a lawman.  And Chico wants to be included in on the goings on, despite the fact that Griff wants Chico to return home and become a farmer on the family homestead.

This film has a couple of flaws if you like things wrapped up tightly.  For one thing, as I said before, I have no idea what Jessica is doing that needs to be covered up.  Surely it can’t be cattle rustling because at one point early in the film she berates her brother over a cow in her herd that has the wrong brand.  (Or maybe she is berating him because he hasn’t re-branded it yet… I just don’t know).

The second part that I find a bit unbelievable is how a love relationship between Jessica and Griff can develop so quickly, since initially she has nothing but contempt for the man and his former occupation.  Still, if you can get past those two details, the movie is pretty entertaining.  Especially if you like Stanwyck (or for that matter Samuel Fuller…I always was a director’s fan).