A sinister criminal by the name of Reiner is intent on destroying the U.S naval fleet as it passes through the Panama Canal. Chan, who is working undercover in Panama City, has only one clue to Reiner’s identity – he or she was one of the nine passengers aboard the Trans-Panama Airways clipper ship that arrived in Panama City the morning of the death of Chan’s contact agent Mr. Godley. Within 48 hours, Chan – with the aid of his Number Two son – must unmask Reiner and discover how this mastermind will attempt to destroy the fleet.

There were 28 Charlie Chan films made for Fox studios and Charlie Chan in Panama ranks high as a fan favorite. It was based on the 1934 film  Marie Galante starring Ketti Gallian and Spencer Tracy. Screenwriters Lester Ziffren and John Larkin heightened its entertainment value immensely by adding numerous suspicious characters and clever red herrings. 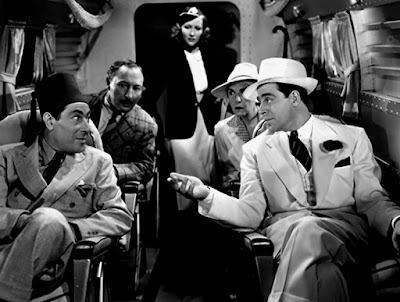 Sidney Toler is always wonderful to watch. After Warner Oland‘s untimely demise, Toler took over the role of the world-famous Honolulu detective and added his own unique touches to the character. Victor Sen Yung makes his fourth appearance as Jimmy Chan, Charlie’s Number Two son, and he is a delight as well. Later, he would become famous on television as the chef Hop-Sing in .
Bonanza

As in most of the Chan films, the atmospheric settings are excellent, with credit going to art director Richard Day (How Green Was My Valley) for his beautiful sets. Charlie Chan in Panama was tautly directed by Norman Foster who helmed most of the Mr. Moto series of films.

Editor’s note: For some insight into the complex (and problematic) history of the Charlie Chan films, we recommended checking out this article from NPR as well as this piece from The Los Angeles Times.