In today’s guest post, Jim Brymer shares his thoughts on a memorable installment from the Batman TV show:

The campy Batman TV series from the 1960s is one of my favorite shows.  I was watching syndicated reruns of this show back in the early 70’s.  I was alive when the original show aired, but I was way too young, so I don’t remember if I watched it when it was on network TV, but probably not.  I would have only been five or six.  When I was growing up, there were only three major networks and no cable.  So TV stations would air a two hour block of syndicated reruns between 3 and 5pm.  It was a ritual to come home and watch the block, called “Dialing for Dollars.”

During “Dialing for Dollars”, the network would air old syndicated shows like Batman, Bewitched, I Love Lucy and Gilligan’s Island,. In between episodes, Norman Bennett, the weatherman on the local KXII news program (and, I found out later, was also a high school math teacher), would come on and call people who had signed up for the promotion.  If they could tell him the exact amount in the kitty at that moment, they would win the prize money.  Otherwise, the prize kitty would increase and would continue until the next commercial break.  By the way, if you’ve seen Tender Mercies or Terms of Endearment or a smattering of other movies, you’ve seen Bennett.  He went on to acting after his stint at KXII.

Batman had a unique format in it’s heyday.  For the most part, each episode was a two-parter, and the installments would run on consecutive nights.  You tuned in on the first night and Batman and Robin did derring-do against the week’s guest villain, always ending in a cliffhanger with the Dynamic Duo facing a seemingly imminent death.  Of course, on the following night, they would escape and eventually defeat the villain.  The show became so popular in Hollywood that many of the current stars lobbied for roles as the guest villain.  Of course the villain roles were limited, but the studio still found a way to accommodate the stars.  That’s why frequently you would see such Jerry Lewis, Don Ho and Dick Clark pop out of windows as Batman and Robin climbed up sides of buildings. 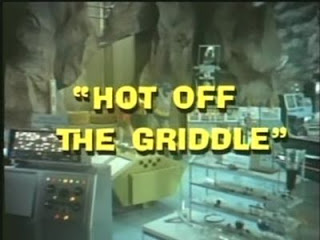 The episode opens, as was usual, with a crime being committed in the seemingly peaceful metropolis of Gotham City.  First a CATalog is stolen from a department store, second a model of a CATamaran is stolen from a nautical club and third three pairs of mittens are stolen from a rich man’s apartment.  Although somewhat dimwitted on occasion Chief O’Hara (Stafford Repp) and Commissioner Gordon (Neil Hamilton) come to the conclusion that obviously Catwoman (Julie Newmar) is back in town. 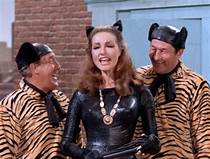 Of course the two are, as usual, completely incapable of dealing with the really devious minded criminals.  (Or maybe they just like taking the easy way out).  So they call on Batman and Robin.  The Dynamic Duo devise a plan to capture Catwoman by planting a story in the newspaper about a rare canary on exhibit.
Unfortunately they choose to release the story through columnist Jack O’Shea (Jack Kelly), a malcontent gossip columnist.  Bad idea, since O’Shea is in cahoots with Catwoman.  He tells her about the plan to capture her.  And Batman and Robin are foiled.

The Dynamic Duo are led by one of Catwoman’s henchmen to her hideout, a nightclub called “The Pink Sand Box” where they are captured by Catwoman and put on a griddle to fry in the sun, leading to this episode’s cliffhanger — and to my absolute favorite of one of Robin’s “Holy …” catchphrases.  After being informed the are have been coated in butter to help along the frying process, Robin moans “Holy oleo” to which Catwoman responds “I didn’t know you could yodel.”

Of course, Batman and Robin escape, due to a convenient eclipse of the sun and Batman’s knowledge of esoteric subjects like math and geometry.  The second half of the episode involves an intricate plan by Catwoman to get a chunk of money.  She kidnaps a wealthy woman, Minerva Matthews (who was also played by Newmar).  Matthews was going to buy a pair of rare Stradivarius violins from Zubin Zucchini (David Fresco).  They arrange to meet in a penthouse room .  Catwoman, disguised as Minerva, takes the cash to the room via an armored car (driven by a very young James Brolin).  She didn’t just want only the money.  If she had, it seems she could just have ditched the armored guard and taken off with the loot.  But she also must have the violins.

Unfortunately, Batman and Robin are on to her scheme.  Instead of meeting with Zucchini himself, it turns out she has met with Robin in disguise and thus ensues the ultimate battle. As usual, Batman and Robin save the day.  The thrill of the Batman series was never really the battle, at least for me.

The basic joy of the series was the dialogue, especially Batman and Robin’s repartee that sounds like it’s been lifted from a low-rent episode of Leave it to Beaver.  Bruce Wayne (or Batman) admonishing Dick Grayson (or Robin) for lapses in adult thinking and Robin always responding with something like “Gosh, Bruce, you’re right.  I’ll never mix gasoline and Tide detergent again…”  And then of course, those ubiquitous “Holy…” of Robin’s.  It’s always fun just to see what new ones the writers came up with for each episode.

What are your favorite Batman episodes? Let us know in the comments!