“Boldly going where no coward has gone before!”

Buck Fleming’s boy is an astronaut. He’s the pride of his father, mother, sweetheart, and the entire town of Sweetwater, Missouri. “A credit to his town, to the nation, and now the entire universe,” they proclaim. What Buck (Arthur O’Connell) and the townsfolk don’t realize is Roy Fleming is not quite an astronaut…he’s a WB-1074. That’s the Space Administration’s classification for an apprentice janitor.

Timid Roy Fleming (Don Knotts) is so frightened of heights that he becomes dizzy operating the space ride at the kiddie park where he works. When he discovers that his father signed him up for the space program his first impulse is to back out. However, when Roy learns just how much his father yearns for a hero in the family, he decides to square his scrawny shoulders and brave the wonders of space for his pappy and the people of Sweetwater, proving that even a coward can become a hero when given a chance.

The Reluctant Astronaut was the second of five feature-length comedies that Don Knotts made for Universal Pictures in the 1960s. Like its predecessor, The Ghost and Mr. Chicken (1966), the film is chock-full of Knotts and serves up a generous slice of apple pie Americana with a healthy dose of hokey humor added for sweetness. It has a script tailored made for Knotts and gave him ample opportunity to bug his eyes out, flex his spindly muscles, and flash all those Silly Putty facial expressions that made him such a top-notch comedian.

Joan Freeman co-stars as Roy’s sweetheart Ellie, a young woman who has very little interest in the frightened bean-pole until she realizes what a hero he is. Knotts’ love scenes are visual wonders to behold. “I think that I shall never see a poem as lovely as a tree, a tree that…” Roy begins to recite to Ellie when she interrupts him and says that when you are trying to be romantic you don’t recite poems about trees. But Roy does. When he steps out to the backyard with Ellie to have a romantic moonlight moment with her, he ends up being whacked by a swing and getting slapped in his face….resulting in a nose bleed, of course. Knotts’ funniest moments are when he steps foot onto the Apollo launchpad. He’s not entirely sober from the previous night’s “blast-off” binge and is still in denial of going up into space, not realizing that the crew are already strapping him into the seat. You can’t imagine NASA actually doing such a hurried launch out of desperation to beat the Russians but that’s what makes the whole scene so funny. Even a monkey would have received more careful training then they gave Roy Fleming and, once onboard the spacecraft, he finds that a simple tube of peanut butter can cause an awful lot of technical complications:

Roy : [ searching his suit pockets ] I can’t find my ticket!

Mrs. Fleming : You can’t find your ticket? [ fumbles through her purse ]…Oh, here it is, here’s your ticket!

Roy : I was kind of hoping it was lost.

Mrs. Fleming : Maybe you can tell the pilot not to drive the plane too high?

What truly makes The Reluctant Astronaut such an entertaining comedy is the Everett Greenbaum/Jim Fritzell script and the marvelous cast of character actors. These two writers penned the majority of the television scripts for The Andy Griffith Show, and they knew what a boon it was too have talented character actors in the episodes. Many of the citizens of Sweetwater resemble characters you would expect to have seen in Mayberry. Jeanette Nolan, who had a tremendous career in radio, stage, film, and television, appears as Roy’s doting mother. Frank McGrath and Paul Hartman are great as Buck’s old WWI pals, while Jesse White is perfect as Roy’s caustic janitorial boss. Also in the cast is Leslie Nielsen as famed astronaut Major Fred Gifford. He is a genuine friend to Roy and a big man in Roy’s eyes.

“Now our most pressing problem is finding the man to take this ride…the least qualified individual you can possibly think of. In other words, the last man on earth that you would send into space.”

The Reluctant Astronaut was filmed at the height of America’s space race and gave audiences a sneak peek at NASA’s impressive Johnson Space Center in Houston where it was filmed on location. Other scenes were shot at Cape Canaveral where, at the time of filming, the Apollo I rocket was in preparation to launch. The film crew captured the added footage of the spacecraft and featured it in the film, which premiered in Houston on January 25, 1967. Ironically, just two days later the tragic Apollo pre-flight test accident occurred in which three astronauts perished in a fire. This loss to NASA, and the country, directly affected the reception of the film and Universal Studios considered delaying its national release but decided to go ahead with its May distribution after all. 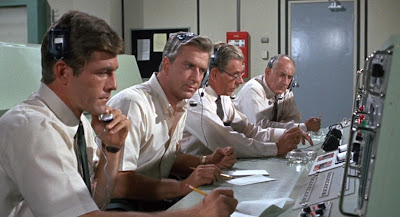 While the box-office receipts for The Reluctant Astronaut were not as good as The Ghost and Mr. Chicken it did not dampen Universal’s excitement in promoting Don Knotts and they quickly went into production for his next picture, The Shakiest Gun in the West.

Today, The Reluctant Astronaut is considered one of Knotts best comedies. With its great theme by Vic Mizzy, its amusing script, and the presence of our number one Astro-Knott, it’s a true blast-off.

Constance Metzinger runs the website Silver Scenes, “a blog for classic film lovers.” This post originally appeared earlier this year, we are reprinting it as part of our ongoing tenth anniversary celebrations which honor the best articles from MovieFanFare’s first decade!