The first time I saw character actress Athene Seyler she was examining a dead specimen of a man-eating plant from outer space under a microscope. She was doing this with her customary aplomb under the watchful eye of Mrs. Peel in “Man-Eater of Surrey Green”, a classic episode of The Avengers. The circumstance of this first encounter was unique in itself but what made it particularly memorable was how remarkably British Athene Seyler was. Across the spectrum of film and television, one comes across all varieties of Brits but certain people stand out as being quintessentially British. Athene is one of those people.

Just look at her face! It is so wonderfully English. Loose jowls, large round eyes with even larger bags underneath them, a rotund figure, and a perfectly circular head. She was often found wearing tweeds, stout shoes, and carrying a walking stick. Like most character actresses, she was a type and portraying delightfully dotty women was her specialty. Her characters were a marvelous median between the kind of roles that Margaret Rutherford or Dame May Whitty would play. 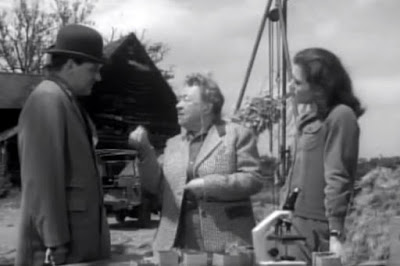 In “Man-Eater of Surrey Green”, Athene’s character, Dr. Sheldon, is fascinated with the plant specimen that John Steed and Mrs. Peel ask her to examine. The fact that it came in a space-ship from another planet doesn’t seem to faze her in the least. She is more excited in discovering that the plant had a brain, an embryonic brain. “Such a shame it was axed!”, she exclaims. Quintessentially British.

But don’t let her assumed dottiness fool you. Seyler was an accomplished actress on the stage as well as in film and television. It was in the theatre that she began her career, making her debut as early as 1909. Throughout the years, she had a number of fine roles in such classics as Harvey, Watch on the Rhine, The Importance of Being Earnest (as Lady Bracknell), Romeo and Juliet, The Cherry Orchard, Bell, Book, and Candle with Rex Harrison, and Arsenic and Old Lace, where she starred alongside her dear friend Dame Sybil Thorndike as one of the murderous spinster sisters.

In film, she was often seen in Charles Dickens’ adaptations, probably because her physical appearance was pure Dickensonian. She was Rachel Wardle in The Adventures of Mr. Pickwick (1921), Scrooge’s charwoman in Scrooge (1935), Miss La Crevy in The Life and Adventures of Nicholas Nickleby (1947), Miss Witherfield in The Pickwick Papers (1952) and Miss Emily Pross in A Tale of Two Cities (1958).

Seyler was equally adept at portraying cockney-washerwomen and prison inmates as members of royalty…in fact, she passed herself off as Queen Elizabeth twice (Royal Cavalcade, Drake of England )! She often played ladies, dukes, and duchesses, but her most frequent role was that of an aunt or a curious spinster. She was Aunt Harriet in Happy is the Bride (1958), Aunt Buona in Francis of Assisi (1961), and Aunt Heather in I Thank a Fool (1962). 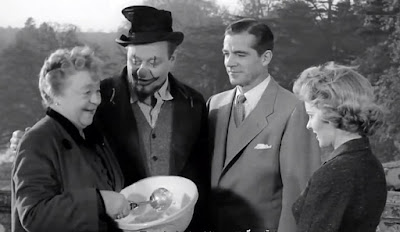 Two of my personal favorite films of Athene Seyler are Yield to the Night (1956) and Curse of the Demon (1957). In the former, she portrayed Miss Bligh, a kindly old woman who makes regular rounds at prisons visiting with the inmates. She is one of the few visitors that Mary Hilton ( Diana Dors ), who is sentenced to hang for murder, takes pleasure in seeing. In Curse of the Demon, Seyler memorably portrayed Dr. Karswell’s mother. She not only knows of her son’s demonic associations but, as a spiritualist, aids him in his pursuits.

Off-screen, Seyler was quite an independent and determined woman. In her youth, she campaigned against blood sports and was active in an ethical society. She learnt early on that she was “different from the other girls. I was much plainer” and so she made up for her lack of beauty through comedic talent. ‘I think to make people laugh is a lovely thing to do…When I was a little girl, my first performance, I went to make my exit, my drawers fell down. And the audience roared with laughter. I had to pick them up, you know. And I thought from that moment on I would do for a comic role.’’

After her first marriage fizzled in 1922, she met and fell in love with actor Nicholas Hannen. His wife had denied him a divorce but Seyler changed her legal name to Hannen regardless and she patiently waited until 1960, when Hannen’s wife passed away, to marry him ( she lived with him in the years between! ). 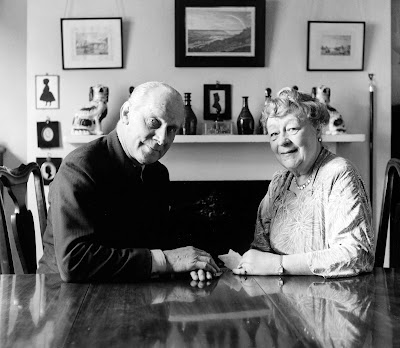 Indomitable is another aptly descriptive word for Athene. She penned a book entitled “The Craft of Comedy” in 1943 and was appointed a Commander of the Order of the British Empire ( CBE ) in 1959. She claimed to have never taken a holiday, enjoying her work so much, and, at the venerable age of 101, she appeared onstage at the Royal National Theatre.