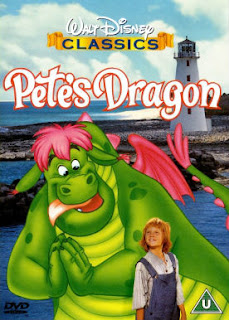 Good ol’ Elliott. He is exactly the kind of companion any child would wish to have. Strong, clever, amusing, cuddly, fun to be with, and he has the ability to make himself invisible when asked (how many friends do you know who will disappear for you?) Elliott’s best quality is undoubtedly who he is – a dragon. Friends come in all shapes and sizes, and Elliott is just about the best shape and size of any dragon you can imagine. He is of the jolly-green-giant variety.

How does one get a friend such as Elliott? Well, as his pal Pete explains, “nobody owns Elliott, he just sort of goes to those who need him.” Truly need him. Pete (Sean Marshall) was such a boy. He was an orphan who was purchased by the nasty Gogan family to be used as an extra hand on their farm. He ran away one night and came to the town of Passamaquoddy where he met Nora (Helen Reddy) and her father Lampie (Mickey Rooney), who operate the lighthouse in the seaside village. Pete wants to belong to someone – and someplace – and he feels like Nora and Passamaquoddy are where he belongs. Only, the Gogans are anxious to get the full value of the $50 they paid for Pete and have come to bring him home.

“That boy is our legal property, same as the family cow!” 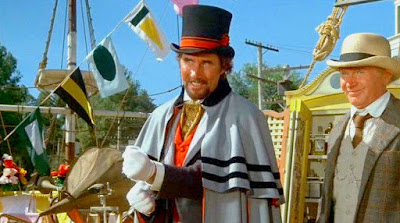 Pete’s Dragon was based on an original short-story by Seton I. Miller, who was famous for penning the screenplays to some of Errol Flynn‘s best films of the 1930s and 1940s (The Adventures of Robin Hood, The Dawn Patrol, The Sea Hawk). Walt Disney had purchased the rights to his unpublished work in the 1950s with the intention of adapting it for television. It sat on a shelf until S.S. Field fleshed out the idea and Malcolm Marmorstein (Dark Shadows) typed out the screenplay in 1977.

Walt Disney Studios always had a flair for creating entertaining musicals suitable for children of all ages and Pete’s Dragon certainly combines all the elements you would hope to find in a family fantasy film: a touch of magic, a dastardly yet highly amusing villain by the name of Doctor Terminus (Jim Dale), quaint settings, a beautiful feminine lead, and a dash of romance – in the form of a long-lost sea captain. 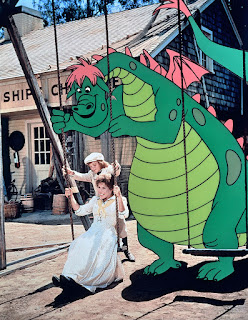 Surprisingly, Pete’s Dragon was made at a time when the studio was floundering. Animated films, which Walt Disney had always been known for, were no longer popular in the theaters and even family-based entertainment such as this story, was viewed as being passé. The studio was going through its dark ages for sure, so it is a wonder that Pete’s Dragon was such a success at the box-office, raking in nearly four times its $10 million budget.

“Life is lollipops and raindrops with the one you love, Someone you can always be with, Argue and agree with….climb the highest tree with…”

The film benefits from a great cast which includes the old legend of Hollywood, Mickey Rooney, along with Red Buttons and Shelley Winters (as Mrs. Gogan). Helen Reddy, who hailed from Australia, was a singer who had made an international hit with the Grammy award-winning song “I Am Woman”. She had a brief appearance in Airport 1975 (as Sister Ruth) before she was offered the lead in Pete’s Dragon. Reddy had a natural talent for acting and this should have been the start of a long acting career but, unfortunately, that never came about.

Sean Marshall, who portrayed Pete, had a few roles in films and television shows prior to Pete’s Dragon. After this film, he was a regular on two short-lived television series, The Fitzpatricks, and The MacKenzies of Paradise Cove, and then retired from film. Jim Dale was marvelous as Dr. Terminus. He began acting in the British Carry-On film series from the 1960s and made a few more Disney films after Pete before focusing his talent on voice-recordings, being especially famous for reading the Harry Potter books for audio release. Also in the cast was Jim Backus, Gary Morgan, Charlie Callas, Charles Tyner, and Jane Kean.

Pete’s Dragon boasts an engaging Oscar-nominated musical score, conducted by Disney great Irwin Kostal. For once, the famous Sherman Brothers could not be credited with writing the music to this film, even though Joel Hirschhorn and Al Kasha’s songs featured some equally clever lyrics. “Candle on the Water” and “It’s Not Easy” are two of the most memorable tunes. 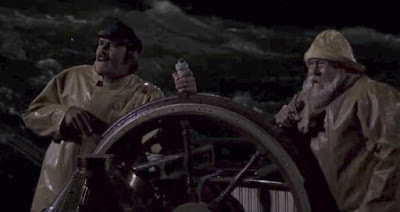 Pete’s Dragon does run rather long and could have benefited from a few well-placed editing cuts, but on the whole, it’s a colorful film with some very entertaining brazzle-dazzle moments.

Constance Metzinger runs the website Silver Scenes, “a blog for classic film lovers.” This article originally ran last year and is being reprinted today for this week’s Flashback Friday post.